I don't like being operated on! I always forget what comes with them - apart from the pain. I suddenly realise after the third or fourth day that you become constipated and that what ever they give you nothing much happens! Last Tuesday my young friend drove me to The Circle Hospital in Reading. Although the hospital car parking is extremely difficult, she managed it eventually and we were shown to my room. Functional, but all mod cons, with a nice big bathroom. At about 2pm I was wheeled away to the operating theatre for a two hour total knee replacement. Mr Sean O'Leary was the surgeon.
This is an indication of the procedure. 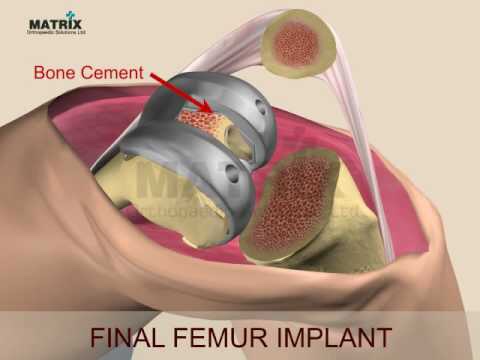 My knee is pretty horrible to look at now but I expect it to start healing soon when the staples are removed in just over a week. Everyone who's had a similar type of operation has told me I must do all the exercises diligently. They are extremely hard to do and very painful. I can only walk on crutches - which the hospital sold me. I also had to buy an ice machine to apply three times a day. (£85 - nothing is cheap at the Circle - and private medicine insurance won't cover these items). MYF is marvellous- I don't know what I'd do without her. One problem is sleeping - I seem to have hallucinations every night. Probably to do with the many pills I have to take every day.
But my stay in hospital was good. I spent three nights there. And because it was too difficult to go to the bathroom at night they supplied me with a bottle. In the silence of the nights it felt like a Gregorian Chant was approaching me. But last Thursday night things took a novel turn - A hand reached out and picked a full bottle up from my table and the peace of the night was broken by my yell. She had accidentally knocked it on the side of the table pouring the entire contents all over me and the bed! "That's the first time in my 14 years of nursing that I've ever done a thing like that" she said. I didn't mention the incident but later in the day the other nurses obviously knew about the incident. These things happen, but as I'm going through my own version of La La Land it doesn't surprise me.

Just received my post - including the award for the watercolour prize from the MASF exhibition in Florida of my miniature of Alan the Boatman. I'll give him the very nice certificate to Alan when he next calls in. I'm not able to paint at all at the moment unfortunately, which is highly frustrating as I need to paint.

As I said before the reason for my knee problem was brought about in 1962 when I crashed my car in Singapore. They said then that I'd suffer from osteoarthritis in later life. Well, it's now later life. Here are two pictures - taken on crutches - 60 years apart. 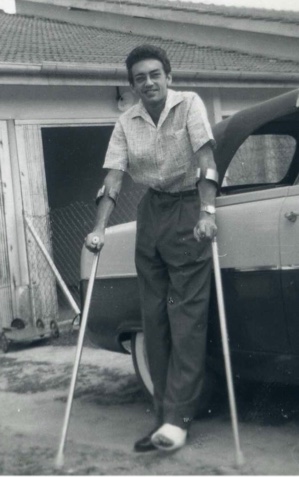 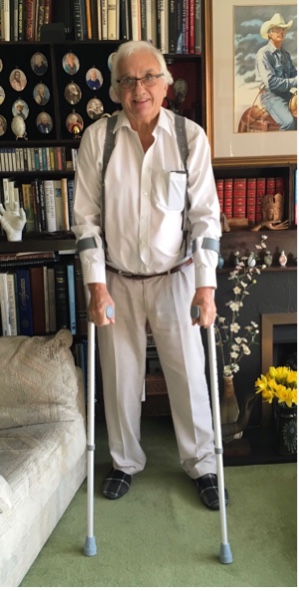 So now it's just a matter of time before I get back to normality. Next Monday my GP will arrange for the staples to be removed and later in the week I'll start a new regime of Physio and see how it goes. And the bruising should start to subside soon. 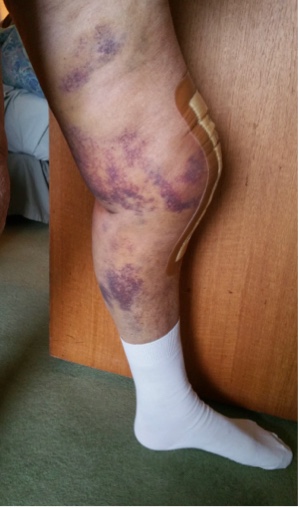