All dressed up and somewhere to go.

Phew! When I got back into my car this morning after bowling the outside temperature was 36 degrees!. Like getting in to an oven. But I won my game - that's a first. I'm up against a top-class bowler in the next round so may be knocked out of the tournament then. But who knows - my luck might be in.
Friday before last my young friend, Debbie and I were invited to the Henley Music Festival by Felicity Wills. And what a lovely evening it was. Here I am standing outside my flat ready to go. 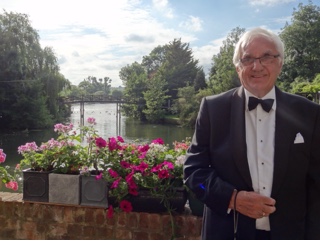 A nice warm evening so the girls didn't need scarves or pashminas later in the evening. Felicity's daughter (and my god daughter) Emma came too. Here she is with Debbie.

And here's how I feel after an hour or so helping out in MYF's garden. 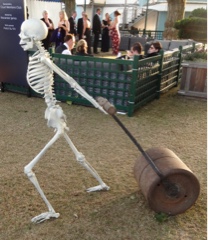 There were other wandering creatures including this small-headed man. 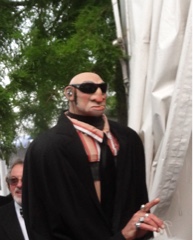 Normally on these occasions a plethora of small boats can be seen clustering around the river within sight of the grandstand where the main event takes place, but this year due to, you've guessed it, 'Elf 'n Safety' regulations, it wasn't allowed. A happy part of the wonderful atmosphere has been taken away by some dreary faceless jobsworth for no reason at all. Why do these people keep on inventing new 'rules' - just to hold on to their jobs I expect. There were still plenty of bigger boats moored on the booms within earshot of the performances. 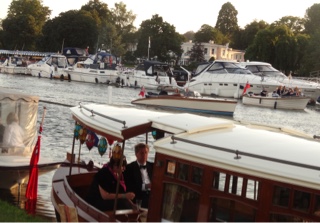 We were there for the bass-baritone Bryn Terfel concert. (On Wednesday Elton John headed the show and on Saturday it was Dame Shirley Bassey.) Although we hadn't bought grandstand tickets we found an incredibly comfortable sofa just outside the Bedouin Tent where we could hear every note. 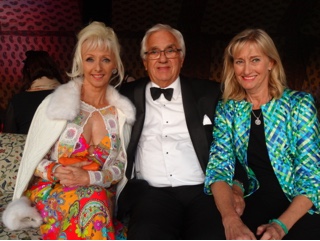 (I hate photographs of me). But Debbie and Felicity photograph well. After the concert we were treated to a short, but lively, firework display. But I was too comfortable to take any photographs this time.
It was My Young Friend's birthday last week so we spent a few days in Suffolk with her parents to celebrate it. On one of the days we went to Shotley Peninsula where w,e had a birthday lunch at the Marina in a restaurant called The Shipwreck.

The Royal Navy's HMS Ganges trained young recruits to be disciplined sailors from the age of 15. With the band of the Royal Marines playing, young boys climbed the mast in time to the beat of the music until one of them - called the 'Button Boy' reached the very top where he stood, or sat, on the button. They have the actual button at the HMS Ganges Museum there, which I stood on. It is less than twelve inches wide! Rather them tham me. Here is a picture of the mast. You can see how many boys can stand on its rigging. 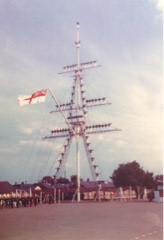 Sadly the mast has deteriorated somewhat and is waiting for resources to restore it for posterity.

While in Suffolk we paid another fist to the Urban Jungle  where MYF and her mother bough a few more nice cannas and dahlias. I really enjoy the place. We had lunch there amid the foliage. 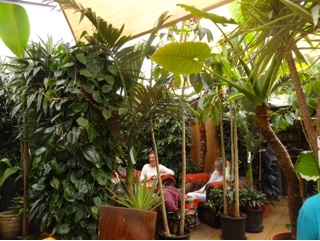 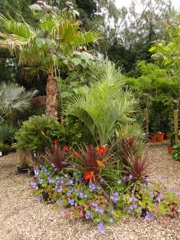 Last Saturday five of my great nieces - Becky, Charlotte, Annabel, Evie and Ellie took part in a 'Race for Life' event at Prospect Park in Reading. 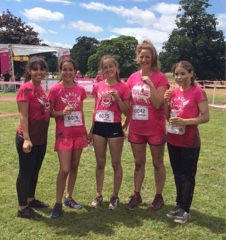 It was in aid of Cancer and although they all got nicely muddy on the obstacle course they raised £745 for the charity. Well done the Mundy girls.
I've finally completed my large oil triptych of autumn leaves. So on Sunday we put it up above my young friend's bed. To position all three paintings in exactly the right positions - one to another - took a bit of manoevering but we managed it in the end. The whole piece measures about six feet end to end. 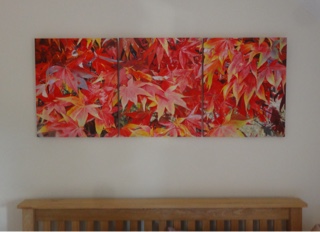 Now I"m back painting miniature portraits. Quite a contrast. By the way if anyone out there would like me to paint them a triptych of (almost) any subject I'd be happy to give a quote.