Wandering through the Wisteria 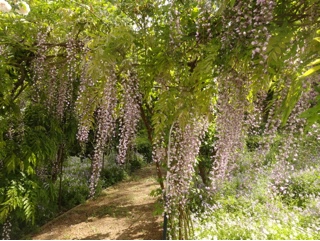 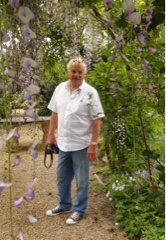 Last Sunday cousin Paul Carter hosted a family party at Allendale Farm, his estate in Great Shefford. Good to meet up with some of the relatives I only see on this sort of occasion. Amongst the many gardens at Allendale the wisteria garden was originally a small paddock, but after Paul's son married Bonney there they planted the wisteria and it is now called the Wedding Garden. Val came with me. Here she is with Paul. 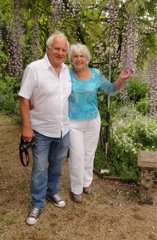 And with cousin-in-law Anne, Julie and baby. 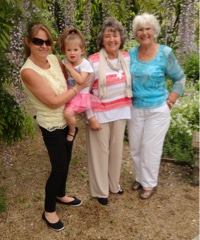 As the day threatened a number of heavy thundery showers it was decided to hold the party in Paul's new barn. A very impressive building which Paul and a friend built from a flat pack. Must have been a big pack as the barn looked to be about twenty five feet tall. Each family took their own picnic. Table and chairs, but we needn't have bothered because Emm, Paul's friend, had organised everything, including a barbecue ably supervised by Paul's son Jim. 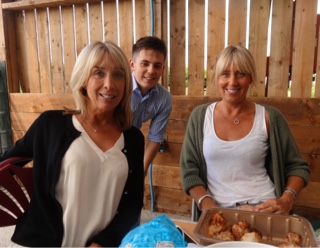 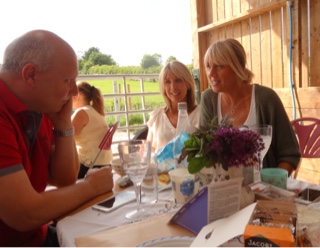 Jim, Michele, and Samantha.
And in the adjoining fields were some of Paul's cows. 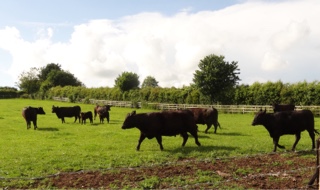 I'm working on a large triptych right now. The subject is autumn leaves and will be painted in oils on fine Belgium linen. When finished the three pictures will stretch to about six feet wide and will be positioned above my young friend's bed. So far I've completed one and am about three quarters through the second. 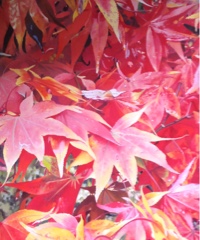 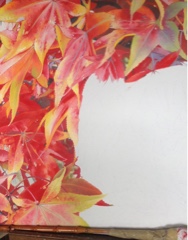 My young friend's garden is really coming along beautifully. Last weekend she worked hard on it while I performed a few chores in my role as under gardener. Here's a bit of an update. 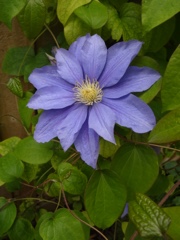 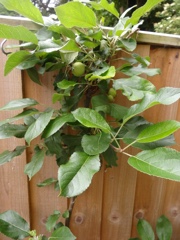 The apple tree has seventeen apples on it - fourteen more than last year. 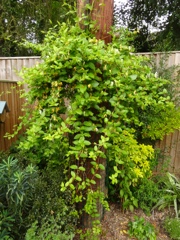 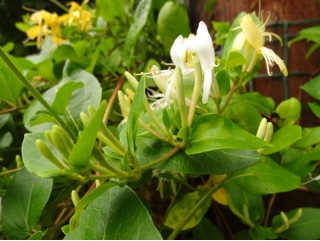 And not be outdone, here is one of my own hanging baskets on my front balcony. 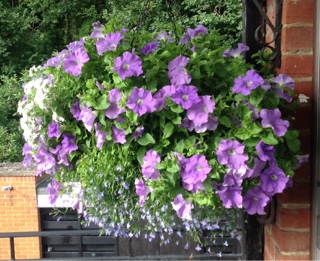 On Sunday evening we invited Debbie McGee, her sister Donna, and Val over for dinner. MYF really excelled herself and made a wonderful roast lamb meal. If there's one thing I like more than anything it's mint sauce on lamb. It makes me salivate and in fact I like it on beef, pork and chicken. Here are the three girls. 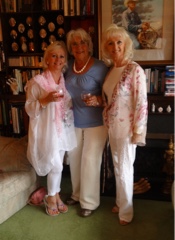 Today I played bowls in the men's handicap at the Henley Bowling Club. I was drawn against Barrie, the club's top player, who in fact won the match last year. I lost heavily.
Yesterday afternoon I had an appointment with the oncologist in Reading to reveal the results of last week's scan and blood test. It's always a worry and although it's three years since the last lung operation I won't be eligible for an annual scan until this time next year. Still every six months. We left in plenty of time for the 4.20 appointment, but as soon as we reached Twyford roundabout a plethora of blue flashing lights signalled that there was no way to reach Reading via the A4. A major accident had blocked the road completely. So after another half an hour wait before we reached Twyford crossroads we then discovered that the road to Reading was blocked by a bridge repair. So we were further directed to turn down a tiny mile-long lane where I knew there was a ford. And due to the heavy rain we've had over the last few days sure enough the depth measured two feet. We turned round eventually and were soon retracing our journey. Then coming down the lane towards us - and taking up just about the entire width of the lane - was an enormous lorry. If I'd been driving I would have just sat there as there is no way I could have reversed the distance that MYF had to. But she managed it and we resumed our journey. And what a convoluted route the sat-nav directed us - at one time we found ourselves on the motorway. However we finally arrived at the hospital, nearly one hour late. But it was worth it as I was given the all clear with no trace of the cancer returning and my bloods looking good.