A box of wasps

We were talking to a friend the other day about crime and the various ways that British police officers are armed. She told us that If she was a police officer her means of defence, and attack if necessary, would be to arm herself with a box of wasps! To disarm her criminal she would threaten him, then let loose her wasps on him. Certainly a novel approach. It made me laugh anyway.
Easter Sunday marked the Mundy family's annual Easter get-together. This year we decided to hold it at the Little Angel, just across the road from Henley Bridge. A really comprehensive choice of meals, so all tastes were catered for. 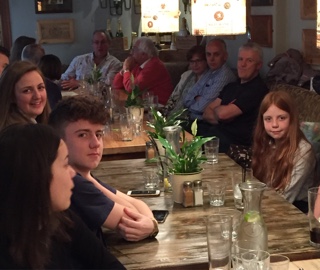 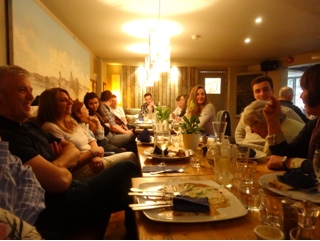 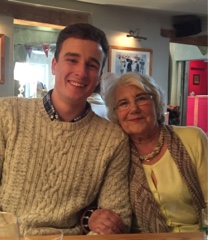 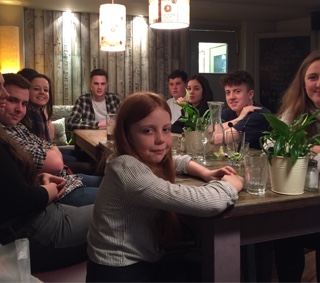 Later in the afternoon we went to Val's house to exchange Easter eggs and to play the money game. Ever since the children were little and I was living in Singapore, when I came home on leave I would save up all my loose change and a few days before returning to the Far East they would all line up in Val's garden while I threw the coins all over the place. On the command 'go' the children would rush around collecting as much money as they could. Now it's their children who are playing the game. (These days I need to include a dozen or so £1 and £2 coins to the bundle.)
Well, I was really hoping my oil painting of Alan the Boatman would soon be hanging in the National Portrait Gallery in London, but it's not to be. I did reach the last 200 but missed out being one of the 57 portraits that will be exhibited. Still I suppose it is something to get that far - with over 3,000 submissions from 96 countries. Now I'll have to wait another year.
The boating season is almost here. Last year was a bit of a washout because my dinghy began to leak, and we only managed three trips on the big boat at the end of the season due to, among other things, a malfunctioning pair of carburettors. Marsh Midget is now ready to be launched after a complete hull overhaul (don't ask how much that cost) and it looks good - from this angle anyway. 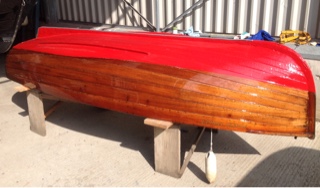 As far as Marsh Mundy is concerned it's now back at its mooring and ready for a really good clean this coming weekend. It's insured and ready to use. Well, not quite because before I can buy the river license I need to obtain a boat safety certificate ( the river equivalent of a motor MOT). So on Saturday afternoon the inspector paid a visit. And it failed the test! Apparently due to new regulations ( issued by the European Union of course) one of my two fire extinguishers uses halon, which is now not allowed, although it's been fine up until now. The other thing that needs doing is to replace a piece of flame retardant gauze and to 'unlink' a hose. So until those things are done ( more hundreds of pounds) I can't get the certificate or the license. Still, safety checks are important, and need to be rectified as soon as possible as we are eager to start boating again.
There's been a nasty bug going around lately which unfortunately I managed to catch. Starting with a very persistant and heavy cough which really became painful for a week or so, then a complete loss of appetite. 'Manflu' said my young friend, sympathetically. But all well now, and I managed to power-clean her sun decking and patio on Saturday.
Yesterday Paul and Jacquie Eaton came over for lunch. Paul is the talented jeweller and sculptor who worked on the Sultana's brooches which contained the tiny little miniature portraits of the Sultan. Val came too and we all enjoyed a lovely roast pork meal that MYF made for us.
I had a small shock on Saturday as I received a letter from the BP garage that I normally buy my petrol from. It said that I hadn't paid for the twenty six pounds worth of petrol I'd bought a week or so ago. As I always note the number of the petrol pump before going into the shop to pay it was a mystery to me. Anyway I rang them and they told me I had paid with a £50 note and also bought four scratch cards. It seems I'd paid for the scratch cards but not for the petrol. (As if I'd buy scratch cards with that big a note!) If they were correct the till operator must have given me too much change. So I drove to the garage and asked to see stills from the security cameras. These they let me see, and they showed me being given the change, but I couldn't really see how much that was. Still, no point in arguing, so I paid up. They said this happens quite a lot. I didn't like to say that as it was unclear as to exactly how much change I was given it could have been less than they said it was. Chalked up to experience.
Saturday was a very sad day. It was the day of Paul Daniels cremation. So we drove over to the crematorium in Amersham. It was a very private funeral - just family and close friends. 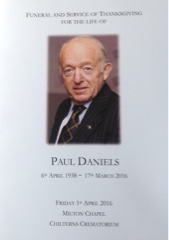 A humanist service, conducted by John Graham. Paul's brother gave a beautiful eulogy - warm, funny and loving. Halfway through the service we heard 'Mr Bojangles' sung by Sammy Davis Jr. - A favourite of Paul. The white coffin was decorated with a pair of playing cards on the side and red roses from Debbie on the lid, together with Paul's silver wand nestling on velvet. As we went out of the room - to the sound of 'Zip-a-dee-doo-dah' - everyone touched, or kissed, the coffin. Most of us had tears in our eyes as we left - Paul was a very special friend. Afterwards we drove back to Debbie's house for tea under a marquie in the garden. Debbie was incredibly brave - the following day would have been their wedding anniversary.