I had one of those senior moments on Friday last week. We'd booked tickets to see the film Spectre at our local cinema. 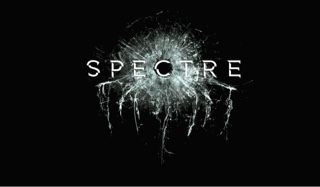 It was a dark and rainy evening as I joined the queue of cars into Henley, giving myself plenty of time to get to the 5.40 performance. Arriving five minutes before the start time I found the last remaining parking spot at the cinema and awaited my young friend's arrival. The time went by. I checked our seat numbers and just before six o'clock decided that she'd be arriving momentarily - probably was looking for a parking place. To save time I bought a couple of ice creams so we didn't have to queue when she appeared. The minutes went by. Still no sign of her. The ice creams were melting. No one seemed to be going into the screen 1 door, so I thought I'd check the tickets to make sure we had booked for screen 1. We had - but for the following Tuesday! I was there on the wrong day! When I finally arrived at at MYF's house, carrying two completely melted ice creams, she laughed uproariously.
Last weekend I was treated to a lovely birthday treat by MYF - a weekend in Devon. After an overnight stay in Yeovil we paid a visit to the National Trust 'A La Ronde' near Exmouth. 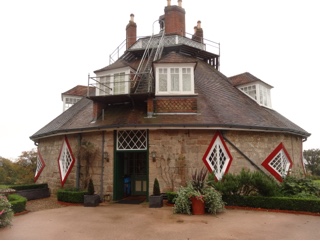 It's a fascinating building with diamond shaped windows and was built by two spinster cousins, Jane and Mary Parmenter, after their return from a grand tour of Europe in the late eighteenth century. It contains many quirky objects and mementos including an incredible shell collection and several monkey puzzle trees. 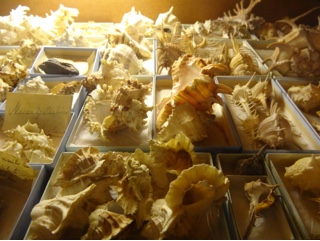 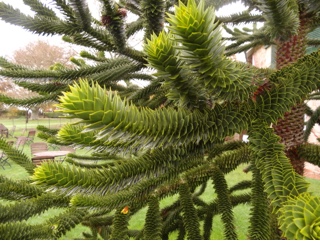 Then on to our destination - The Quayside Hotel in Brixham - with this glorious view over the harbour. 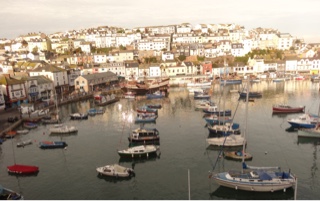 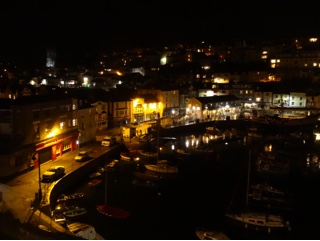 The 'Golden Hind' is moored there too. 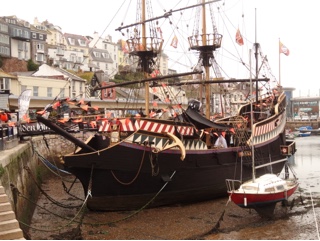 That evening, it being my actual birthday, we met old Singapore friend Ian Stevens and Amanda for dinner at a swanky French restaurant called Chez Pierre on the seafront in Torquay.
Being a Scorpio I'm very attracted to water, and love rivers, boats and the sea. So on Saturday, a sunny and warm day, we boarded this riverboat at Dartmouth for a cruise up the river Dart. 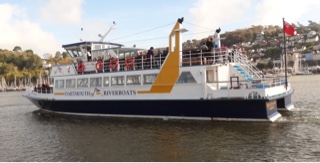 After about an hour we turned round at Greenway - Agatha Christie's country home.

On the way back we passed this lovely old paddle steamer. And for a complete contrast 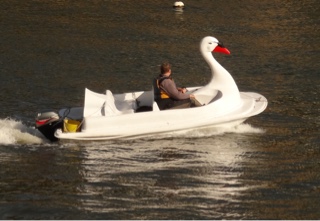 We are both members of the National Trust and frequently visit their properties. So, later on in the afternoon we made our way to Coleton Fishacre. 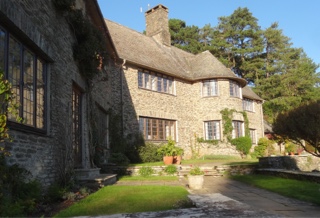 Certainly one of my favourite places. This Art Deco country house was owned by the D'Oyly Carte family famous for staging the Gilbert and Sullivan operettas in Victorian times. My favourite room was the library - I would spend most of my time there if I owned this lovely house. 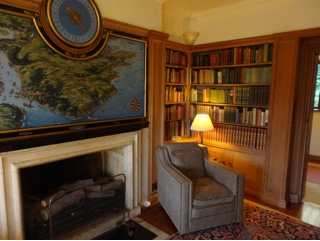 The gardens are undulating and extensive. About 24 acres I think. We only walked around a small part as my legs are not what they used to be, but we saw several of the little ponds, most surrounded by a surprising amount of tropical foliage. 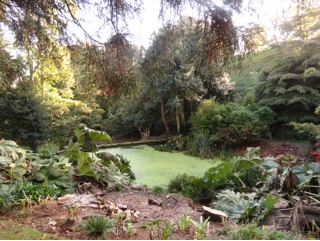 And a little robin looking forward to Christmas 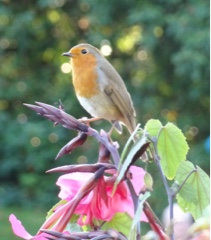 Do you remember seeing the television series called Wolf Hall? It's an historical drama written by Hilary Mantel which chronicals the rise of Thomas Comwell. Well, Barrington Court, a Tudor Manor House built in the 1550's in Somerset, and another National Trust property, was the venue for the TV drama. It is unusual in that it contains no furniture at all - ideal to stage the filming I imagine. We visited it last Sunday and were lucky enough to see many of the original costumes made for the actors, as it was the last day they were to be on display.  Here are some of them. 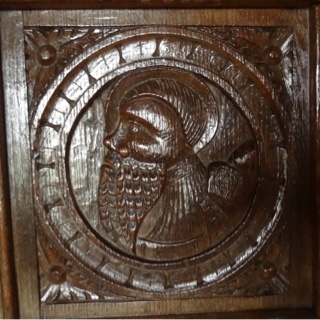 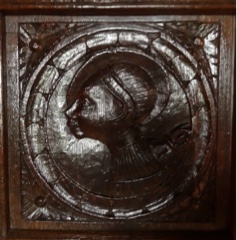 And one of the rooms - devoid of furniture. 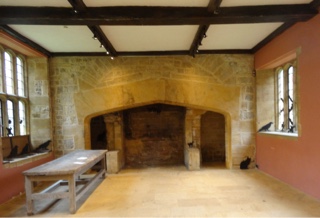 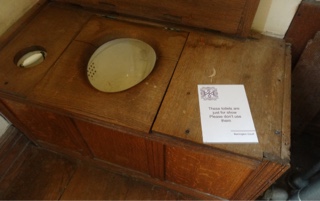 It was a really lovely weekend. Thank you, my young friend. One of the best ever. On our drive back to Oxfordshire we stopped at Lytes Cary Manor. How's this for carefully cut topiary? 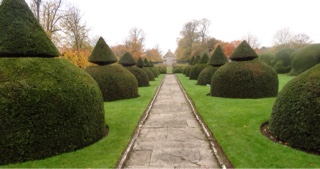 And a lovely rustic corner in the autumn. 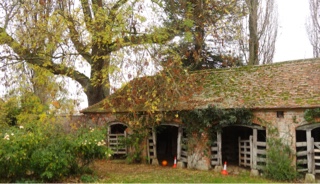 Then The rain came. It rained and rained. Yesterday we had planned to drive over to my cousin Paul's house in Great Shefford where I was to photograph two of his grandchildren, Georgia and Derry in preparation for miniature paintings. It absolutely poured for almost the whole hour of the journey but the sun came out just as we arrived. Great little children - I look forward very much to starting the portraits next week.
Luckily the evening dried out as we had booked for the Guy Fawkes dinner and firework display at Phyllis  Court. The bonfire lasted for hours and the fireworks were magnificent. 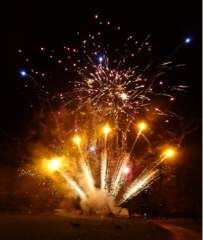 One last thing. I nearly fell for a very clever scam last week. Quite often we artists are approached via the Internet by possible new clients or others wishing to purchase paintings they may have seen on our websites. A man called Brian Burke sent an email saying he wished to enquire about buying a painting, and was I able to ship overseas. I replied that I was, and asked where he had seen my work and which particular work was he interested in. He promptly replied, thanking me for my swift response. All vey polite and friendly, but he didn't answer my questions. This time he said he could only give me his credit card number and asked me to click on a certain PayPal code. I became slightly suspicious and as a ploy suggested that I had many friends in America who could deliver the painting he chose personally in return for giving over his cheque. But when I spoke to my young friend about it that evening she probed the man's name on line and discovered he was a scammer. What might have happened would have been the receipt of money via Pay pal followed by another message saying he'd overpaid and would I send him the difference. Then as soon as I'd done that his payment would have been cancelled. I mentioned this on Facebook and another two artists had replied but luckily not compromised.