The sun shone yesterday morning and my young friend's family was visiting so we thought we'd pay a visit to Harcourt Arboritum. The opening time was 10am, so the brochure stated, but the gates were closed when we arrived. A few minutes later a car drew up and the occupant unlocked the gate. He went in then locked it again. A few other people were waiting to go in but the grumpy man said the harboritum opened at 11. So we hung around at a nearby garden centre till just after eleven. Of course there was a big queue when we got back. That jobsworth could easily have let us in at ten, but never mind we had a good look around. Harcourt Arboritum is owned and run by Oxford University. The children were given nice little activity satchels and spent the morning happily collecting colourful leaves. 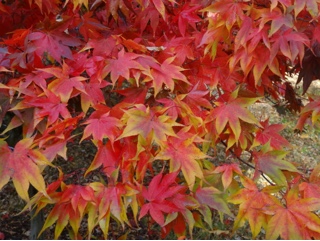 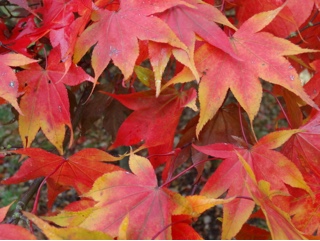 Peacocks roam around the grounds. 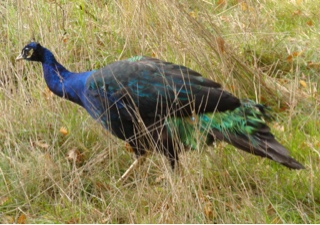 And this little owl was carved from a tree stump

Then back to the garden centre where I must say they had a spectacular Christmas department. 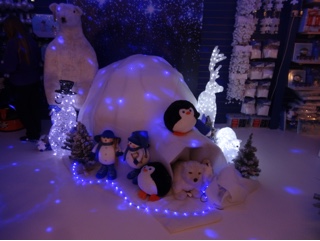 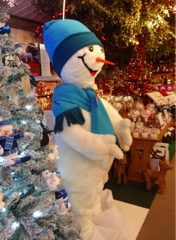 Talking of Christmas, the other week, being undecided as to which of two of my recent paintings would make the best Christmas card this year, I posted both of them on Facebook to see which got the most votes from my Facebook friends. This was the winner. 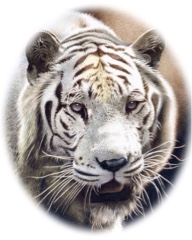 So I rang the printer, sent an image by email, and within three days received 300 cards. I do like efficient people. Now they are all in envelopes, mostly written and just awaiting stamps. Incidentally here is a preview of this year's Christmas stamps. I think they'll be out on 3rd November.

Last week the Royal Society of Miniature Painters opened its annual exhibition in the Mall Galleries in London. Here's a view of our President, Rosalind Pierson, presiding over the awards ceremony. 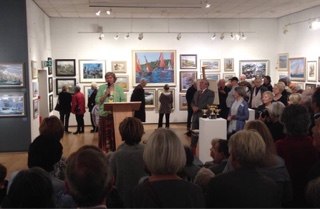 The awards were presented by the famous author, Dr Gervase Phinn. He gave a marvellous speech - so witty  - no wonder he's a much sought after Public Speaker. He also has a small collection of miniature portraits. I was honoured therefore to be presented with the Bonhams Portrait Award. 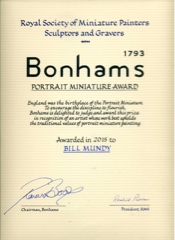 This was for my miniature portrait of Sir Clive Martin OBE. 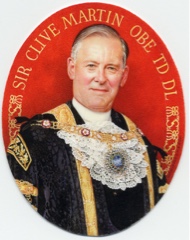 It may seem odd to go from portraits to waterbutts but last week my young friend bought a small waterbutt for her garden. To fit it we needed to saw the down pipe in two leaving a gap of 30 millimetres so we could fit the pipe from it to the butt. For a start I had no idea the down pipe was made of plastic. Anyway after a bit of a struggle - using a tiny little hacksaw - we cut the piece out only to find there wa no way to fit the four inch connector. So in the end we had to remove the down pipe from the wall and force it to fit. I think it works because yesterday I checked and found it full of rainwater, and at the correct height.
Nothing much else has happened in the last couple of weeks. I had my carpet cleaned and in the process the cleaner broke my executive green lamp. But no point in trying to claim as he probably would have the £50 for a replacement taken out of his wages. Wish he'd cleaned the carpet today as I spilt a cup of tea on it on Saturday and can't get the stain out.
Every year I paint two or three miniature portraits for myself - mainly for exhibition purposes as it's not always possible to borrow back commissioned ones. This will give you an idea of a section of my notice board which shows about a third of my collection ( still got another fifty in my living room). 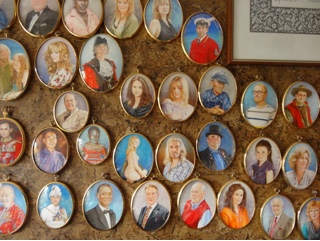