In 1977 a small group of enthusiasts from the River Thames Society held a small rally at Shepperton with a view to gathering together like-minded people to encourage the restoration and preservation of traditionally built craft. They felt that traditional boat building was dying out. From that start the Thames  Traditional Boat Rally steadily grew to become the pre-eminent display of classic craft in the country. This year the event has changed its title from Rally to Festival. 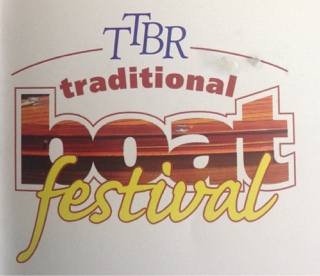 My young friend and I called in to the Festival last Saturday afternoon. So much to see - 22 little Dunkirk boats, who this year are celebrating the 75th anniversary of the evacuation; Bluebird K3, Sir Malcolm Cambell's world speed record boat; the Queen's Row Barge 'Gloriana'; MTB 102, the Royal Navy's fastest warship in World War Two; and a staggering variety of other traditional craft. This is Papillion - one of the Dunkirk Veterans. 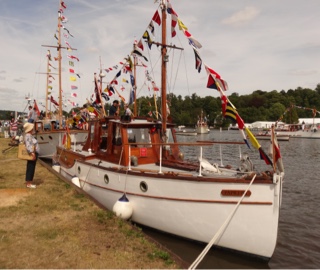 And L'Orage - once owned by The Association of Dunkirk Little Ships Commodore, Raymond Baxter, and now lovingly looked after by John Calvert. 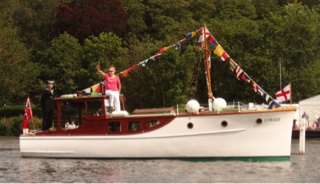 Here's Aquabelle ( being overtaken by a car.) Car? 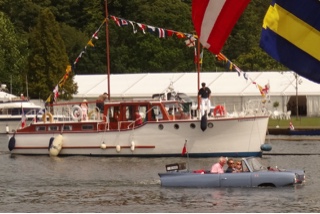 In 1938 Bluebird K3 reached a speed of 130 mph and it's making it's first ever appearance at the Festival. 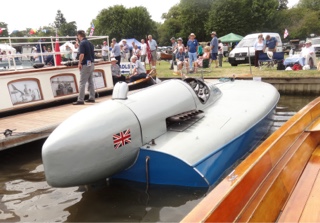 Unfortunately it didn't make the 'speed' run as proposed due to a fire in the engine compartment. They even restricted river traffic between Marsh and Hambleden locks in preparation for the run. Another first at the Festival was the Queen's Row Barge - the 'Gloriana'. 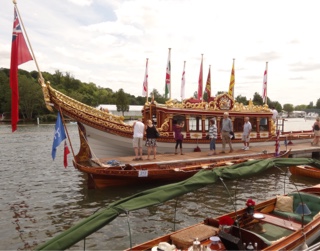 The barge was built by a team led by traditional boat builder Mark Edwards to celebrate her Majesty's Diamond Jubilee. It's nice to know that there are still craftsmen (and women) with the skills to construct this magnificent craft. 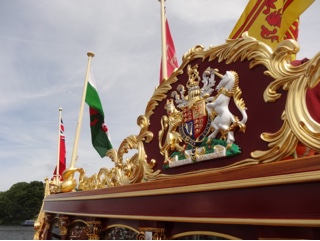 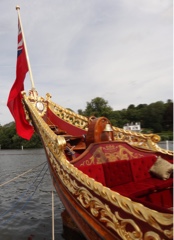 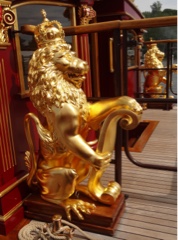 And you meet many colourful chapters as you stroll along the river front. 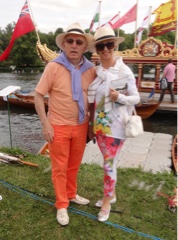 In 1944 MTB 102 carried Winston Churchill and General Eisenhower on their review of ships assembled on the south coast for the D Day landings.

MTB 102 played a significant part in Operation Dynamo in 1940, crossing the channel 8 times. After the war she was refurbished and starred in the film 'The Eagle Has Landed', starring. Michael Caine. 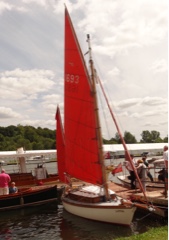 So many lovely boats on display.
We went to see Boeing Boeing at the Mill at Sonning on Tuesday evening. 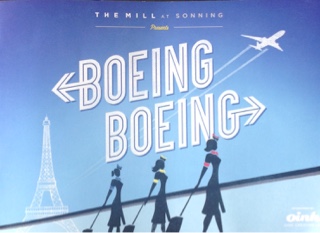 Although my young friend only booked on Monday evening we found ourselves sitting in the front row. right in the middle. And as the front of the stage was only a few inches away from my feet I had to be careful not to trip any of the actors up when they came near. A really funny play. So colourful as well with the bright red, blue, and yellow uniforms of the TWA, Lufthansa, and Alitalia air hostesses. (Gretchen from Lufthansa quite frightened me!).
On the work front I'm over the 200 hour mark with my large painting of Venice. I think I might call it 'The Three Gondoliers'. Set against the facade of the Basilica San Marco it's quite a complicated painting - especially as there are eight mosaic paintings to reproduce.
On Monday afternoon I was asked to make a 45 minute Power Point presentation at the Greys Village Hall to about 50 Volunteers who work at The National Trust's Greys Court in Henley. I called it "Sultans, Sweeps, Soldiers and SwanUppers" where I related a few of the more interesting encounters during my painting sessions with such diverse people as Mother Teresa and Spike Milligan. And as happens from time to time, although the audience seemed happy, I became a bit frustrated with the equipment. Only having two hands it would have been impossible to turn the pages of the presentation, operate the computer, and hold the mike. So my young friend ordered a tie-mike on Thursday to be delivered by first class post on the following day. It arrived the day after the presentation! And when Tess from Greys Court set everything up the image on the screen became distorted by squeezing it to half the width. But eventually it worked by using my own laptop. The video clip wouldn't play and the sounds I'd inserted within the presentation were a bit faint. We got over my lack of a third hand by Tess operating the laptop and advancing the almost 100 images.
Last Friday evening Paul and Debbie came over to my young friend's house to see her garden. (Debbie hosts the BBC gardening programme with Colin each Sunday and she'd appeared there a couple of months ago). Of course it rained all day! But they had a short tour of the garden anyway. It's looking really good right now. Here's the 'jungle' part. 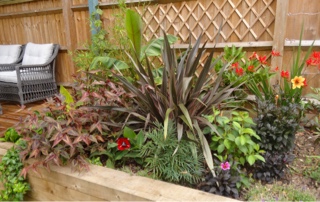 At last the airconditioning in my car has been mended. It took three sessions at the garage, but they finally found the cause of the problem. Apart from a tiny relay switch (which had to be sent from Japan) a couple of leads to the compressor had become loose. Not that I know what a compressor or relay switch does! 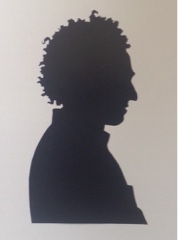 This is a silhouette made by Charles Burns. Last night, together with Paul and Debbie, I went to a preview of his film 'Silhouette Secrets' at Mays Barn in Reading. A very talented man, Charles is the top silhouettist in England. The film lasted about an hour and ranged from a New Year's Eve party to a history of the art. I was amazed how quickly he cuts his silhouettes. Part of the film showed him visiting Texas to challenge America's most famous and record breaking silhouettist. She holds the record of cutting 130 portrait silhouettes in one hour! The event was filmed and although the actual result wasn't announced it appeared to me that they both bettered her record. The film also spotlighted several of the most famous silhouettists from the past centuries. For example this is a silhouette by William Hubbard (1800 - 1862) 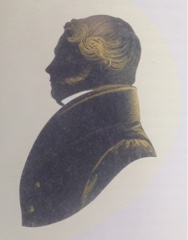 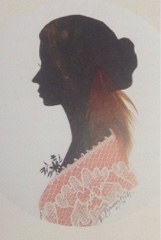 It was such a fascinating evening and I enjoyed meeting the director of the film and a Bavarian sculptor. At the end of the film the audience was asked to give their reactions and suggestions. There were many and we were all asked to fill in a questionnaire regarding the editing, production, music, direction etc. To see Charles work is amazing. His fingers move at such a speed with his scissors it's impossible to follow. I wish I could make a portrait in 30 seconds or so. But I did make a painted silhouette a few years ago. It's of William Stone - my old 108 year old friend. 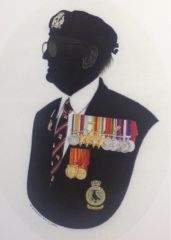 Last Sunday morning heralded the Henley Bowling Club's annual 'Yardstick' competition. When my turn in the draw took place I noticed that most of the eyes present gave me pitying glances. I soon found out why. I had been drawn against the Club's top player Barrie Davies. Sure enough he beat me - by 21 to 12 which, in fact, is not too bad considering my inexperience.  And there's always another year.