To continue with my anecdotes. A few years ago I took on the task of organising all the graphics and computer image work for the Henley Conservatives special dinner. The idea was to emulate the highly successful BBC television programme "Have I Got News For You". Quite a daunting task. Also, together with a colleague, we wrote the entire script complete with as many topical jokes we could think of. First of all we needed a chairman. At that time Boris Johnson was the MP for Henley. He agreed, and as for the four panel members - Frederick Forsyth, the author. Paul Daniels, the magician, Kenny Lynch, the comedian and TV personality, and Laureen Williamson, the author and lecturer, all agreed too. It took months of work to write the show and called it "Has Boris Got News For You" I learned so much about computer imaging in the months that followed. And as I needed to rehearse Boris in the final script (allowing for him to ad lib as much as he liked) he agreed to come over to my flat for an hour or so, and also agreed to pose for a few dozen photographs for me to use as reference for a miniature portrait. His hair was as wild as always so I lent him a comb. (It didn't make much difference!). Here is the portrait. (And I tidied the hair as much as I could). 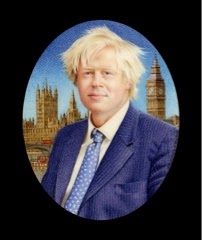 Being a Member of Parliament at the time ( now, as you know he is the Mayor of London as well as recently elected MP for Uxbridge) I painted the Houses of Parliament in the background. The miniature was eventually acquired by the Society of Limners for their collection. Incidentally, Boris really enjoyed the evening and wrote me a number of very flattering letters. And I've just finished reading his latest, and superb, book entitled "The Churchill Factor". When I was studying his face for the portrait I noticed similar furrows above his brow - similar to those which Winston Churchill had throughout his life. Which prompted me to remark that one day I predicted he would become Prime Minister himself.
Last Saturday, after depositing a couple of paintings at the Llewelyn Alexander gallery in London, we thought we take the dinghy out for our first trip on the river this year. The wind was blowing half a gale and the current was strong, so I had to admit I just didn't have the strength to row for more than half an hour. It was nice to be back on the river though. And right next to my mooring we spied a little family of Canada Geese on the river bank. 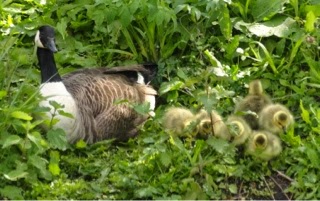 We can't use my big boat yet unfortunately as it won't idle properly, and I can't risk stalling or crashing into the wall of our building when coming in to moor. The carburettors have been checked very carefully and the boat expert can only conclude that somehow water has become mixed with the petrol over the long winter idleness. Hope it's fixed soon.
Paul, my cousin, came with me to he sculpture class yesterday as I was finishing the sculpture head I am making of him. This is the clay stage, just about complete. Next week all the waxing, fibreglassing  and final bronze work will start, so hopefully within six weeks or so I'll show you the final head. 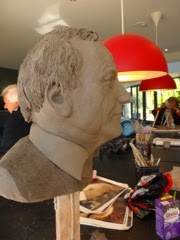 For the past month or so I've been working on two miniature portraits for clients in Indonesia and the USA. Both wanted their young daughter's portraits painted. But both being overseas the only way of showing them the final results before sending them the originals is to make computer images of them. This presents several problems because a computer image, no matter how good the scanner is, cannot produce an exact reproduction of the original painting with all the subtlety I put into my miniatures. And as I have to work from photographs of people I will never meet I only have these images to work from. Invariably when the client receives the computer image they blow it up to many times the actual size and often bring a variety of friends and family in to comment. And as it seems that everyone feels they have to comment ( on paintings, but rarely on photographs with the excuse that the camera can never lie!) I may get all sorts of tiny suggestions sent back to me. This happened with both clients, but all is well now with my latest miniature winging its way to South Carolina as I type this blog.
I mentioned in a previous blog that I realised at the last moment that my painting of Alan, the boatman was ineligible for acceptance in the BP Portrait of the Year Award in the National Portrait Gallery in London this year because watercolours are not allowed. So I've painted a new portrait, different pose, of Alan, this time in oil colours and life size. Here it is and ready for submission next year. 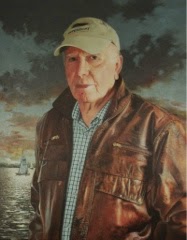