One of my first portrait commissions, when I returned to England after my many years in Asia, was a life-size oil portrait of Sir Felix and Lady Brunner. They owned Greys Court - a lovely 16th Century mansion  on the outskirts of Henley in Oxfordshire. There was just one problem, Sir Felix was very ill at the time, suffered from Parkinson's disease, and spent most of his time in bed. I was able to paint Lady Brunner from life but as for Sir Felix, could I make use of a small sepia photograph of him? Lady Brunner wanted the painting to show them looking into each other's eyes. But I really needed to see Sir Felix in the flesh, so to speak, before attempting a portrait of that nature. However, a week or so later Lady Brunner rang and said that Sir Felix was well enough to be brought downstairs, but as he was extremely wary of strangers, should we meet I would need to pretend to be either the new butler, the gardener, or the 'Man from The National Trust'. Opting for the latter, knowing nothing much about gardening and even less about butlering, I managed to study his face for a short while, and eventually was confident enough to complete the portrait and even portrayed them apparently holding hands. As the portraIt progressed I was able to borrow his walking stick, pullover, shirt and tie from time to time without him realising they were missing. The painting now hangs in Greys Court, which since thei Brunners death has been taken over by The National Trust. 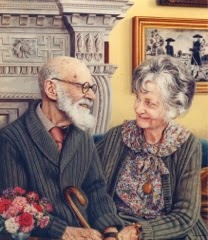 Before she died Lady Brunner told me a very nice story. Her son, Hugo, was talking to the vicar of Turville - a nearby village - who, not knowing how the picture was painted, asked him to tell his mother that whenever he married young couples, he advised them to pay a visit to Greys Court, look at the painting of Sir Felix and Lady Brunner where they 'would really appreciate what love is like in old age'. Artists don't often get to hear this sort of comment. Next time I'll tell you about my audience at Chitralada Palace in Bangkok when I presented two miniatures of the King of Thailand's daughter, Princess Maha Chakri Sirindorn. Why two? That's an interesting story.
Last week Lee Kuan Yew - the 91 year old charismatic former Prime Minister of Singapore - died. I was living in Singapore when he became Prime Minister, and very much admired the man. He led the way in bringing his country to its present prosperity. He achieved harmony between all the many races and oversaw a totally incorruptible government.
Sir Stamford Raffles was the original founder of  Singapore in 1819, and Lee Kuan Yew the modern founder of Singapore, so in the seventies I painted a dual miniature portrait in recognition of these two men's achievements.  Lee Kuan Yew's head placed above Sir Stamford Raffles body. Here it is. 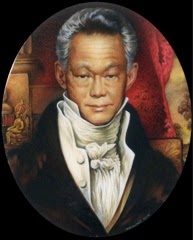 Yesterday, being Easter Sunday, the Mundy clan (most of them that is) gathered together for our annual do in Henley. After a nice meal at the Maltsters bub in Greys we all went back to Val's house for the annual 'Money Game'. Ever since my first long leave from Singapore we've played the game in Val's garden. During the year I save all my loose change and at the word 'go' all the children race around the garden looking for the money. What they find they keep. It's now such a tradition that the original four children, Neil, Stew, Tim and Louisa, stand back as their own nine children search for the coins. There was a bit of a difference this year as I added a dozen five pound notes to the bounty. Anything copper runs the risk of being ignored due to inflation and the speed with which the children grow up. Here we all are under Val's apple tree. Guy took this picture. And we are missing Becky and Josh who are living it up in France at the moment. 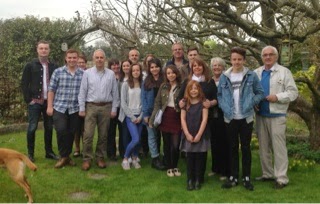 Today, being the hottest day of the year so far, my young friend and I have been working in her garden. I've power sprayed the sun deck and patio while she top dressed the lawn, mowed it, and planted a few new flowers. A few dozen giant begonias and fifteen or so fuchsias are being carefully kept inside, next to my balcony in readiness to plant out when the danger of frost is over. Begonias for my balconies, fuchsias for MYF's garden.
On the work front I've started a life size oil portrait in readiness for the 'Portrait of the Year' competition at The National Portrait Gallery in London. I wasn't eligible this year with the portrait I'd intended to enter because I hadn't realised watercolour portraits were not eligible.
This sculpture of my cousin Paul has about two sessions to go before it's ready for the bronzing stage. More to do on the eyes and  pullover. 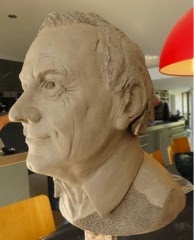