HRH The Sultan of Johore

During my time in Singapore I was commissioned to paint a number of miniatures of the Sultan and his Sultana. We became good friends and one day a telephone came through to my office. It was from the Sultan. "Mr Mundy, I'd like you to paint two new head and shoulder portraits". I was delighted as it was always a pleasure to paint this man, usually bedecked with medals and orders. "Four by five" he continued. "That's rather large for miniatures, Sir". I replied. Straight away he responded. "Young man, are you trying to cut me down to size?" He then went on to explain that what he really wanted were two large oil portraits -  four feet by five feet! One for permanent display in the throne room at the Istana Besar (Large Palace) and the other for the Prime Minister's office in Kuala Lumpur. I didn't think he even knew whether I could paint in oil. And besides,  5 by 4 was - in my opinion - too big for a head and shoulders portrait. We eventually compromised and next day I I roughed out a drawing about 24 by 30 inches and took it across to Johore to show him. Once inside the Istana I realised I'd forgotten how high the ceilings were in the Palace - about four or five times that of my flat! Nevertheless I proceeded with the oils, and over the next couple of years painted several portraits for him and the Sultana. Here's a smallish portrait of the Sultan I painted on vellum. 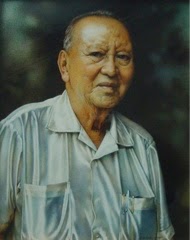 And this is the miniature I painted of him that was exhibited in the Royal Academy Summer Exhibition in London. 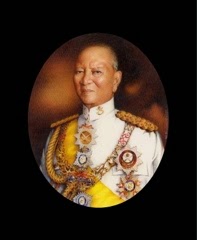 Next week I'll tell you the story of my visits to Greys Court in Henley when I was commissioned to paint a large oil of Sir Felix and Lady Brunner.
My neighbour Guy, who goes for an eight Kilometre walk every morning' has recently invited me along on one of the days each week. And as I hardly do any exercise, being chained to my desk for 8 or 9 hours a day, I thought it would be a good idea - but for about half the distance. Last Friday we drove to Dorney where we had a lovely breakfast in the garden centre there before walking beside the new Jubilee river. This recently constructed man-made river helps to alleviate flooding in the Eton, Maidenhead and Cookham areas.

What a delightful walk it was. Plenty of river wildlife to be seen, including half a dozen cormorants each drying their wings on yellow buoys . 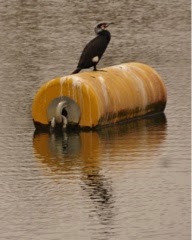 There's a small grazing marsh along the route. 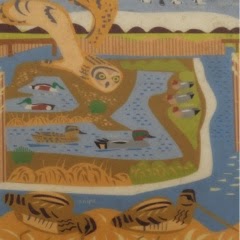 And this is one of the views of the river.

It would have helpful if the bridleway signposts had told us where they led to. 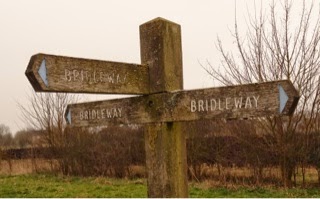 My young friend and I spent most of yesterday in her garden. We planted two large standard 5 foot high photonias. Beautiful trees, often called 'Red Robin' due to the red shoots and glossy green leaves. As the earth was quite wet digging the holes was heavy going.I'd bought a couple of devises which enables her to pull down her hanging baskets to a height which she will comfortably deadhead and water the plants. But we hadn't allowed for the extra length. So we spent an hour or so re drilling into the wall to make the brackets  about a foot higher. Neither of us are DIY experts so a lot of swearing took place until success was achieved. Most of the thirty or so tulip bulbs we planted in January were eaten by squirrels but five or six are beginning to shoot. However the Chinese warrior is keeping guard by the bamboo grove and the still-covered banana plant. (Hope it survives the winter frosts). 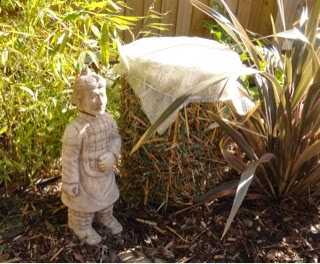 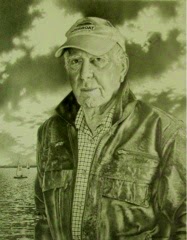 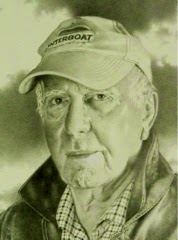 Somehow it's hard to photograph pencil drawings but this gives an idea of it, albeit a bit contrasty.
The other day I read an article about a new hotel in Japan, scheduled to open in July. This may very well be a model for the future. It will be run almost entirely by robots! The robots will check in new guests, carry their luggage, and clean their rooms - all with a smile. And the guests won't need room keys because the doors will be fitted with face recognition technology. The 72 room hotel is located in Sasebo theme park. The company president. Hideo Sawada, said "The robots are designed to look like young Japanese women, and will appear to be really breathing, blinking, and making eye contact with guests. Their cloth uniforms also makes them look more human. Three of the robots will run the reception desk, another four will act as porters, and others will clean the rooms and serve as cloakroom attendants."
The mind boggles!