Children don't seem to write thank you letters as much as they used to, but I thought I'd reproduce one that I received the other day from my great niece Kate. She's eight and has ambitions to be an author/illustrator. This came in the post the other day. 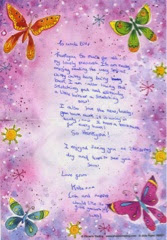 She's also a very polite little girl and even wrote a thank you for the postman on the envelope. 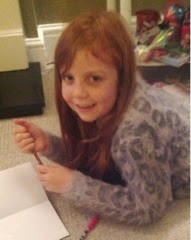 Louisa, Kate's mother, had no idea what she had written till I showed her the letter.
On Sunday morning my young friend and I went to the studios of BBC Berkshire in Reading where we were due to appear on the gardening programme. We'd been asked to talk about how we'd gone about designing and making her new garden. I took along the model I'd made together with the book showing the progress. 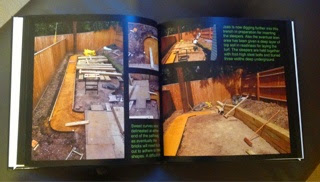 Debbie McGee hosted the programme and Colin Evans is the professional gardener. We had a really good time and came away with numerous tips on winter planting, care of the garden, and climbers. We'd had a lot of trouble with, assumedly, squirrels digging up and eating most of the hundred or so bulbs we'd planted just before Christmas. With Colin's advice hopefully we won't have the same problem next year. Here I am, compete with headphones, with Debbie and Colin. The picture was taken by my young friend. 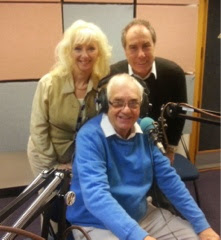 Having spent almost 500 hours on my last two large portraits, as I said before, just a few days prior to the submission date I discovered that watercolour paintings are not allowed in the BP Portrait of the Year National Portrait Gallery Award. So I quickly switched my allegiance to the Royal Society of Portrait Painters annual exhibition at the Mall Galleries where there was just time to submit the paintings.  However on Friday we found out that they failed to be selected in the first round (where entries are pre-selected based on digital images). I must say that to judge paintings on anything other than the original work is not to my liking. So there's just one more chance to get at least one of my two paintings in a major London exhibition. And that is the Royal Academy Summer Exhibition. The deadline for entries is the first week of February so, although I doubt whether the RA goes for my style of painting these days (even though I twice won 'Exhibit of the Year' at the Summer Exhibition in previous years) I'll keep you posted.
What have I been working on lately. Yesterday I spent over 10 hours and managed to finish a pencil portrait for a friend. It was of her husband who died last year. However she only had a few holiday snaps for me to work from, so I had to make an A4 size portrait from a tiny face less than half an inch high. Today I completed a miniature of my friend the boatman. It's a different pose to the large portrait I made in November. 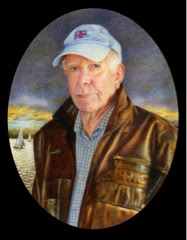 Now I'll be starting a commission of a handsome little boy - the son of a client who lives in Indonesia. Thank goodness for the Internet.