I'm getting ready to enter the BP Portrait of the Year competition. There's another few weeks before entries have to be submitted and I'm well on the way with my second painting. So far I've put in about 140 hours on this large almost life-size watercolour. I met this man in northern Thailand some years ago and  was attracted by his lilac robes. 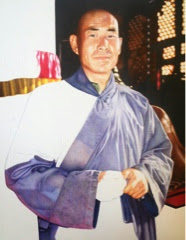 I'm going to call it 'The Inscrutable Smile' and as I reckon it needs another 100 hours to go before it's completed I doubt whether it will be finished before Christmas. Here's a close up of the face. 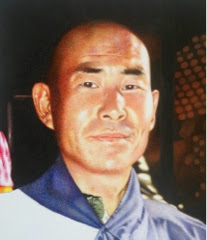 So far I've used five size 1 best quality Kolinski sable brushes, and estimate I'll get through a further three before the picture is completed. You can appreciate why I wear out so many brushes as the whole painting is done using just the point of the brush - millions of little dots and tiny strokes.
Last night my young friend's Company held its Christmas party in The Old Brew House in Henley. Originally the building housed Henley's police station so it was interesting to see that we were seated right opposite what must once have been the cells. Part of one wall had been bricked but a big iron gate was still visible. We learned how to make dogs and hats from balloons 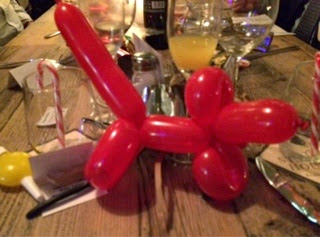 While I was visiting the wife of my artistic friend on Saturday morning he rang through so I had a chance to have brief chat with him. He was hoping to sing a solo in the prison choir at Christmas but was told he could only be part of the main choir. At least he is allowed to draw a bit (but no portraits) and was lent some watercolours the other day so made a lovely humorous Christmas card for his wife.
Finally all my Christmas shopping is done and mostly wrapped now. We decorated my Christmas tree yesterday afternoon and will start on my young friend's shortly. Here's mine.

I was reading the other day about a council somewhere in the West Country making cuts in its budget.  One of the jobsworths there had the bright idea of a way to cut the cost of hearing aids prescribed to the deaf. In his wisdom he decided that as we all have two ears, he could cut the council's cost in half by only allowing deaf people to have a hearing aid for just one ear! How daft! Try crossing a busy road with just one hearing aid when you are stone deaf. And that's just one example of the problem.
A few days ago as I was driving home I heard a programme on Radio 4 about people obtaining autographs in unusual situations. It brought back the memory of when, some years ago now, I sat next to Mother Teresa on a flight between Bangkok and New Delhi. We chatted about all sorts of things and collected a number of food items in our sick bags as she wanted to give them to the poor children in India. During the flight I asked her if she would let me make a drawing of her. She agreed and as she talked and smiled all her many wrinkles seemed to dance around her face. My hair was considerably darker then and a Thai man sitting across the isle took this picture of me sketching away. 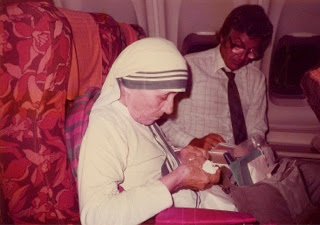 I only had the back of an exhibition catalogue to work on but was delighted when she agreed to sign the drawing. Here it is. 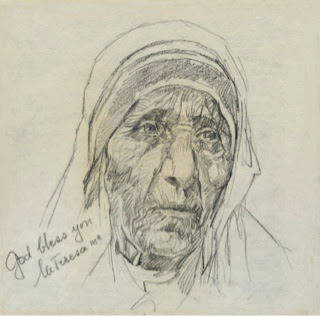 Such an incredible person - and so modest. She only talked about the poor children of India, especially those in Calcutta. I asked her if she was ever ill.  it seemed she'd had nearly everything including malaria and dengue fever. When I remarked that her many awards must amount to quite a collection she said she didn't even remember where her Nobel Prize was!  I did ask why Mother Teresa of Calcutta was getting off in Delhi. She replied that she had to meet someone there before going home to Calcutta. It was only when I arrived home in England and was watching television that evening that Mother Teresa appeared on the screen. She was at a ceremony in Delhi where the Queen of England was awarding her The Order of Merit. She hadn't mentioned that to me. What a privilege it was to meet her.