A Smile for Christmas

You probably know that the Post Office produce ‘Smilers’. These allow you to incorporate your own photograph or painting with a variety of actual postage stamps. I ordered two designs. Here’s one of them – with my painting ‘Spitfire over Henley’. 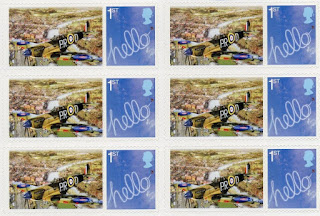 I’ve also ordered another set illustrating my latest river painting entitled ‘When the Queen came to Henley’. This time with a union flag stamp motive. They should arrive before Christmas. This set , depicting my ‘Snow in Henley’ painting has just arrived. 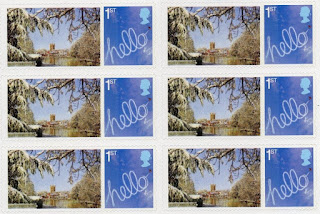 Last week heralded the start of party time – at least the end of the week was. My friends Stan and Fee Stride always start Christmas off for me with their Friday evening party at Broadplat House, and I always arrive exactly on time, (it’s a tradition that I’m first there) although I mistimed it by 10 minutes this year so sat in their car park for a while before going in. Such a warm and lovely atmosphere. Then, the following lunchtime (after calling in with my young friend to take a cherry cake to Debbie) I went to Herchel Jordan’s party at Wooburn Common. Great to see so many old friends there – and as always, a sumptuous array of food. Here are a couple of photographs – the first with Herchel, Jimmy Tarbuck and Gerald Ratner. The other with Jimmy and his wife Pauline.

The day didn’t end there as it was my young friend’s office party in the evening in Henley. Very nice evening – even though I was mixing with a large collection of PHD intellectuals. After dinner we had a quiz, and our table, much to our surprise, was the winner. (We shared the bumper box of Ferrero Rocher chocolates with the other tables afterwards).

At the end of the week my client – The High Sheriff of West Midlands - came down, with his wife, to collect his large portrait. It’s always a bit daunting delivering a portrait – especially after spending so many hundred hours on it. However they were delighted, and I breathed a sigh of relief!

Yesterday I went to the picture framer in Reading where I collected my latest portrait. It’s quite a small watercolour (about 10 inches high) but I think I’ve captured Fred’s twinkle in his eyes.  I often put a little secret in the background of my paintings, and this one is no exception as it contains two personal references for him. Here’s the painting. I've just delivered it. Fred is very happy with the picture and was intrigued to see that his eyes follow you  around the room as you walk past it. 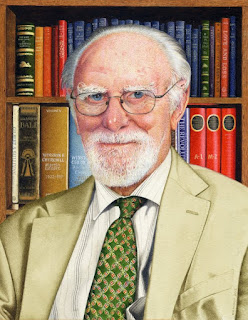 On Wednesday I took the Phyllis Court coach to London where I met my old friend Trevor Wayman from our Hong Kong days. We had lunch in Waterstone’s in Piccadilly. Trevor is a fantastic artist and a true romantic. Every year for Valentine’s day he makes a beautiful little present for his wife, Laura. I’ve seen the collection going back over twenty years. His latest is a wooden carved heart resembling an old typeface block.. Somewhere he’s incorporated the words ‘You are my type’. (But I’m sure there are also more terms of endearment hidden somewhere).  After lunch I bought the remaining half-dozen Christmas presents I needed at the Science Museum – always a great place for unusual and classy presents. Next door – outside The Natural History Museum I took a picture of the skaters and a nearby carousel. 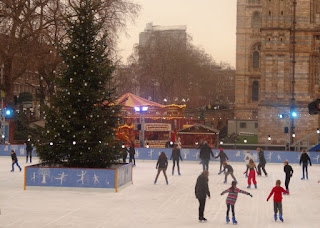 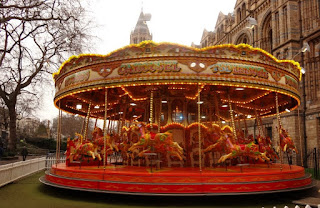 Then a quick visit to Harrods. Here’s one of their Christmas window displays, plus one with my reflection showing at the back of this window. 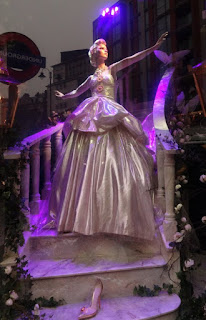 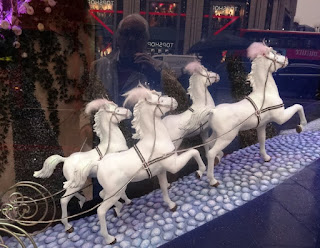 Glad I went to London by coach as I read in the paper today that the daily 7.44 train from Henley-on-Thames to London was named the most overcrowded train in the entire country. This First Great Western service carries nearly twice its passenger capacity and tops the league table of shame published by the Transport Minister. It has a ‘load factor’ of 180 percent, which means it is at 80 percent over capacity.

Did a bit more Christmas shopping on Sunday morning and bought a new iPad. On this version it has an interesting extra called ‘Siri’. Just press the home button and ask it any question you like. It’s amazing how my voice immediately translates into text on the screen and then the answer appears next to it together with a fairly deep male voice on the speaker. Just for fun I asked it “Do you love me?” And the answer? “Well, you’re definitely starting to grow on me”. I daren’t take our relationship any further!

It just remains to wish everyone a very .... 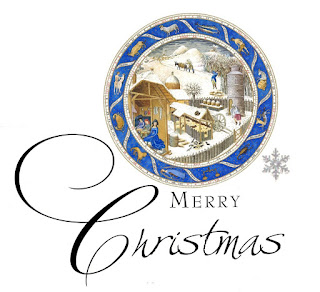