What with squeezing in a bit of time in the evenings to watch the Olympics on television and spending as much time as possible on my painting of the Queen and all the boats in the Henley Pageant, I’ve hardly had time to put pen to paper. But at last I’ve finished my sculpture of Rolf Harris – at least the first stage. So no more clay for the time being. (However I have started another head – this one of my great nephew, Max. With all the mistakes I made with Rolf, I think I’ve learned a lot and should attain a better likeness).

There are four more stages to go to produce the final bronze head of Rolf – the first of which took all day last Thursday. I naively thought that a few coats of the ‘goo’ to make the mould would do the trick – not appreciating the hard work involved. Just stirring the rubber solution and hardening chemical until the mixture was thick enough to cover the clay head soon made my arm ache. And I needed to do this four times throughout the day. At one stage a sort of netting is put around the head, and this in turn covered with the goo. Here’s the result after about six hours work. 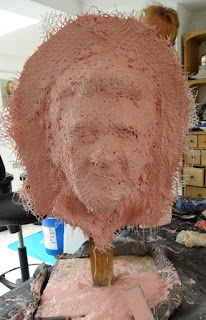 Next Thursday I’ll need to make the ‘jacket’ out of fibre glass and fill it with resin. So hopefully within less than a month I should be able to post a photograph of the final bronze head on this blog.

Last Friday my young friend and I were invited to dinner by Debbie and Paul at their home by the river. Rolf and Alwen were also invited. It was a gloriously warm evening and soon after we arrived we all clambered aboard Paul’s electric boat for a pre-dinner trip down the river. 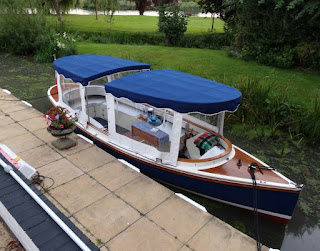 As their creek is silted quite badly, with all six of us aboard we made a noisy way out to the main river by dragging the hull of the boat into the silt to eventually create a channel deep enough to allow us out. Soon we were out and gliding along sipping our drinks and nibbling on snacks. Rolf was his usual colourful self. 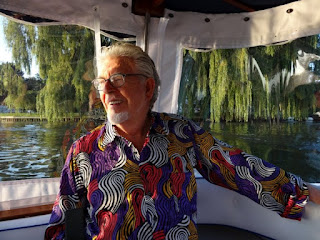 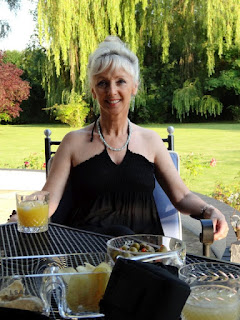 It really is boating weather now and as the river is behaving itself – not too fast and not too high – so the following day my young friend and I decided to have a picnic on one of the little islands past Shiplake lock.  Most of the riverside nooks and crannies were already taken up but we eventually found the ideal spot and tied up beneath a big oak tree.  We had a lovely picnic (and took the opportunity to christen the new wickerwork picnic basket) which we ate while moored here. (no we didn’t eat the hamper!)
﻿ 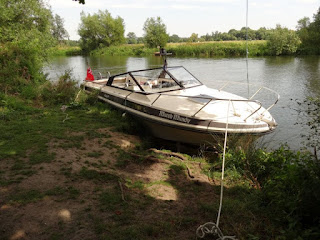 Returning home we found a big queue of boats of all sizes waiting to get through Shiplake lock. The large 140 horsepower engine on my boat is not very good at hovering too long but eventually we managed to get through after two or three lockfulls.
Next day, it being Sunday, I meant to just paint for a couple of hours but ended up working on my Jubilee painting for nearly 8 hours before going up to Val’s for dinner. There we watched the closing ceremony of the Olympic Games on TV. I especially liked the disassembling of the big sculpture of John Lennon’s head, the roller skating nuns and the phoenix rising from behind the Olympic cauldron. 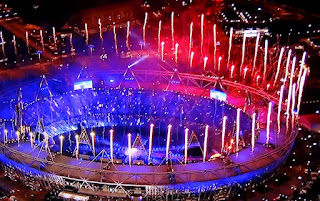 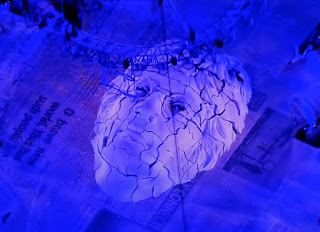 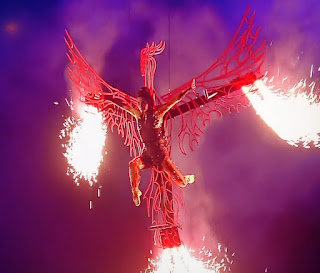 I haven’t played ‘Colours’ at the Phyllis Court Snooker Club lately but as there was a match there last Wednesday, decided to take part. I needn’t have bothered as I lost all three games. Never mind, it was a really nice evening.

Now it’s Sunday again! How time speeds by! As yesterday was the hottest day of the year so far, with temperatures around 30 degrees centigrade, this time we planned to take my dinghy, Marsh Midget, through the length of the lovely Hennerton Backwater. I now have two (very heavy) deep cycle batteries for the new electric motor so was confident we could spend most of the day tootling around on the water. This was the first time we navigated the backwater this year. As the new motor is quite a bit bigger than the old one, it had to be removed and laid flat in the bottom of the dinghy before we, in a similar position, handed our way along the brick ceiling of this, less than 3-feet high, entrance to the backwater. 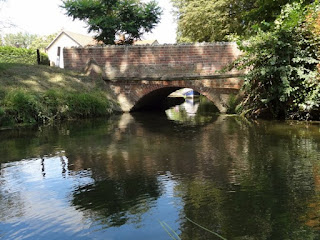 ﻿With a totally silent engine we glided along and around all the bends of Hennerton, past sunlit fields sleepy in the heat of the noonday sun. Finally we tied up next to a leafy hedgerow to eat our lunch. This is view from our picnic spot. 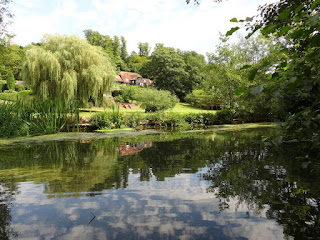 And afterwards as we progressed along the stream a couple more bridges came into view before we eventually merged into the main river. 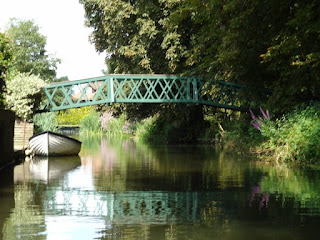 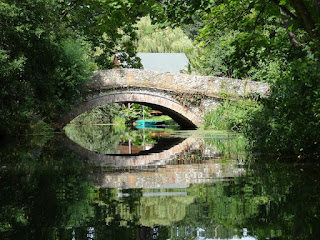 Again there was a mighty queue at the lock, so we moored up at the floating pontoon next to the lock keeper’s cottage, until Nigel (the lock keeper) could fit us in the lock between a slipper launch and an enormous canal barge.  Our day on the river didn’t end there – after a quick break at home we continued, this time, downstream under Henley bridge past Leander Club with its banner celebrating its 111th Olympic medal win.
﻿ 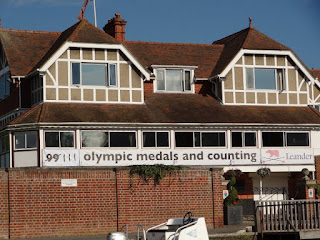 And on towards Temple Island whereon the opposite bank is where Henley’s annual Rewind Festival is being held. What marvellous weather they’ve had for their festival this year. Quietly and slowly we drifted along past all the razzmatazz of the festival. Here are a few of the sights (taken from the river). 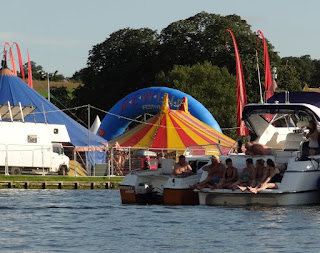 On our way home we saw a jolly nun who apparently had escaped from the festival, pedalling furiously down the towpath with her piano, singing her (or his) heart out.  We managed to capture this picture of her from our vantage point from the other side of the river as we motored along. 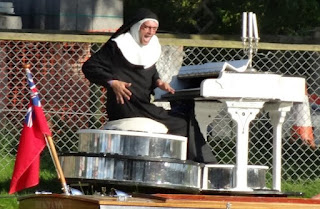 Even amongst the loud noise, music and energy of the festival, if you looked in the other direction there were little quiet tableaux of skiffs and other little boats moored in the shadows. 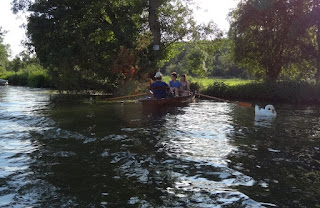 To end an energetic, but great day on the river, as soon as we got home again we drove over to Streatley to have dinner on the waterside boardwalk of the Swan Hotel. (They do a great sausage and mash with onions, as well as fish and chips with unique hand-cut big chips). This was the view from our table. 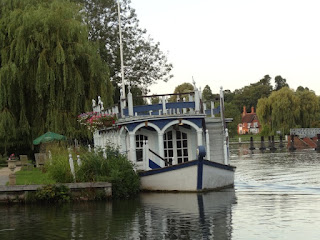 And here I am sipping my ginger ale.
﻿ 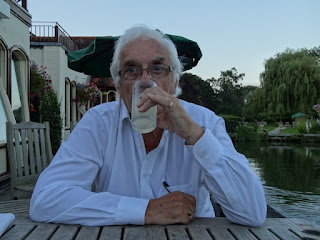