You may remember I mentioned in a previous blog that we were rescued by a boat called ‘Spanish Lady’ and towed back to Marsh Lock after our boat overheated when the Olympic torch came to Henley a couple of weeks ago. Talk of coincidences. Yesterday afternoon – after spending an hour or so at the Town and Visitors Regatta (where we followed a race in the umpire’s launch) … 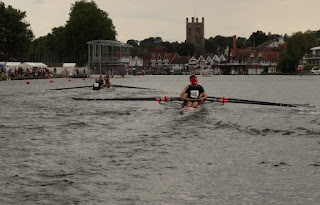 … we decided to take my dinghy out – this time to test the little electric engine. After a few mishaps - with the boat going round in circles (backwards) - I finally got the measure of it and we happily travelled halfway to Temple Island before turning back towards home. Just before Henley Bridge the boat went out of control again risking a clash with one of the many crews on the water. However, with my young friend skilfully using an oar as a paddle we managed to tie up near the slipway. In trying to figure out what was wrong with the engine a kindly voice from one of the moored boats asked if we needed any help. ‘Of all the boats - in all the river’ we had moored next to ‘Spanish Lady ‘ the very boat that had come to our rescue a fortnight before. I asked the owners – Peter and Anne Francis – if they just hung around the river on the lookout for boats in distress! Peter soon discovered the problem – the plastic housing surrounding the drive shaft had split. Offering us a tow back we declined, as it was such a nice sunny evening and I wanted to row the mile or so home. Not without incidence because, as we passed the crowds of people sitting out at the ‘Angel on the Bridge’ someone called out something (probably ‘Hello Ratty’) and I caught a crab and fell backwards onto the bottom of the boat. Ah, the joy of boating – every trip is different.


So what have I been doing lately? Painting very hard – putting in many long hours. I completed a second, and different, miniature of Kevin Giddings 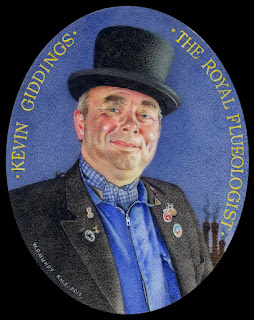 and a miniature of the Mayor of Henley as well as beginning the rough colour layout for my proposed large painting of the Henley River Pageant when the Queen came to Henley. But in-between times I had planned to go to Sussex last weekend to have lunch with Kevin and Katie Giddings. So, together with my young friend, we set off for Polegate – near Eastbourne - on Friday evening. The first gloriously sunny weekend since May heralded Saturday morning so we drove to one of my favourite towns in England – Rye. Walking up a steep cobbled street we came across the famous Mermaid Inn. 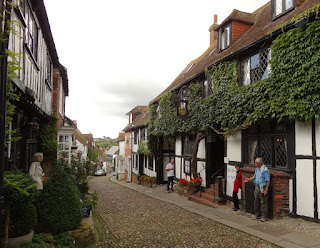 We went inside for a drink but the bar didn’t open till midday. Had we had one we would have been sitting here by the ‘Giant’s Fireplace’. 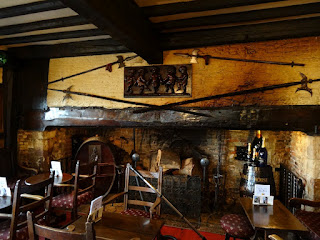 Rye sits on a rocky outcrop and much of the mediaeval layout of the town remains unchanged. In 1336 it became one of the Cinque Ports. Once, almost surrounded by the sea, in the years following the Norman conquest of 1066 Rye grew in importance as a port and trading centre. Now the sea has receded. In 1573 Queen Elizabeth1st stayed in Rye for a few nights in what is now called the Old Custom House. Here it is today. Notice the crooked chimney. 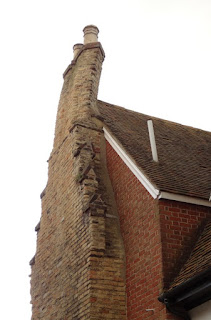 The town is well-known for its smuggling activities and members of the infamous Hawkhurst gang met regularly and openly at the Mermaid Inn ‘carousing and smoking their pipes, with loaded pistols on the table before them, no magistrate daring to interfere with them’. Wandering through the town we came across the Church of St. Mary the Virgin. These photos show the two ‘Quarter Boys’. (The originals have been ‘retired’ and are on view inside the church, as is the old clock mechanism dating from about 1561. 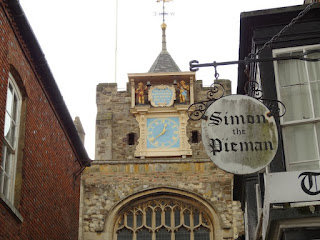 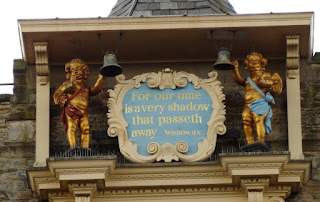 Also inside the church, the pendulum, 18 feet in length, swings freely to and fro.

Another sight we wanted to see was the Ypres Tower. Not quite as old as Rye itself, it was built in 1249 by King Henry III. 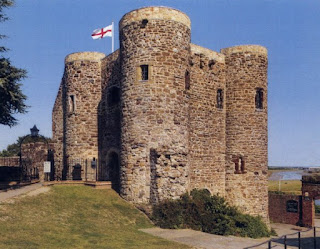 After an ‘Eccles Cake’ lunch we drove about 10 miles north of Rye to visit the fairytale Bodiam Castle – complete with moat. 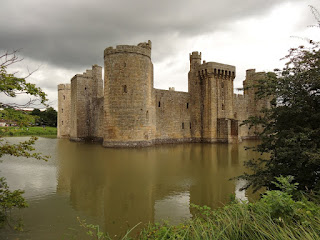 One of Britain’s most iconic castles, Bodiam was built in 1385 as a fortress and comfortable home, the walls rising up out of the moat to create a view little changed in over 600 years. The interior was destroyed by Oliver Cromwell. My young friend climbed to the top of this ancient edifice, but her ancient companion rested in an alcove and watched the trug maker at work. 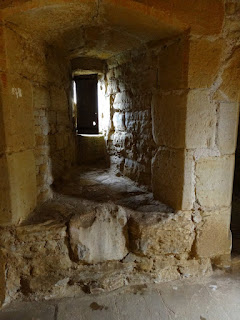 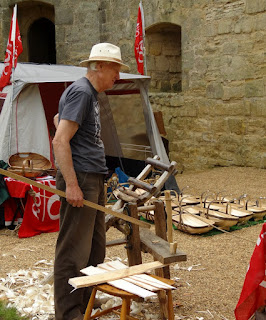 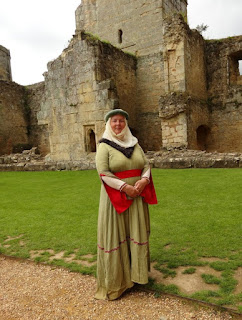 We walked all the way round the castle – every view is stunning. 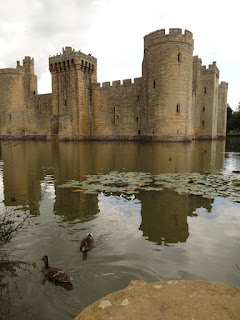 On the way back to Polegate we decided to see if my old friend Thelma Burton was in. She lives in a little cottage in Wadhurst. I’ve known Thelma for many years. We first met when she lived in Singapore and kept in touch over the years after she married Charlie Burton (the explorer who accompanied Sir Ranulph Fiennes on their 3-year Trans Globe Expedition when they circumnavigated the world). We arrived just in time for tea and all three of us had a nice old natter.

Later in the evening we planned to find a nice restaurant on the seafront in Eastbourne to have dinner but without success as all the big hotels there mostly served residents only or weren’t open for dinners. Nevertheless we walked along the pier. 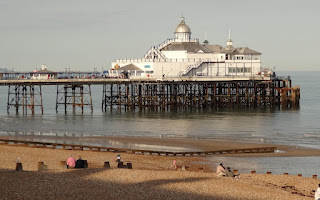 ﻿This building on the end of the pier styles itself ‘Camera Obscura’ but I couldn’t find out if it really does house a camera obscura as a hig sign at the entrance  read ‘No Entry’. 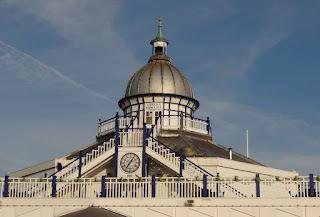 So we left Eastbourne for dinner at our hotel with one last look at the reflections on the sea at sunset. 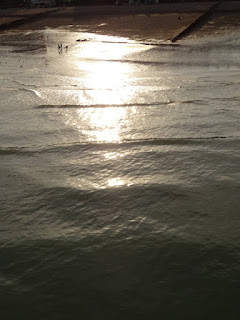 Next morning we paid a visit to Wakehurst Place. It’s an adjunct to Kew Gardens and is beautifully groomed. Here’s the main building. 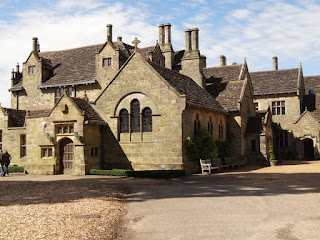 We spent about an hour there in the sunshine, walking around, sitting on the occasional seat and admiring the many flowers. 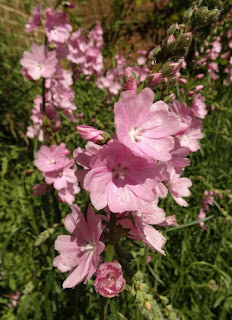 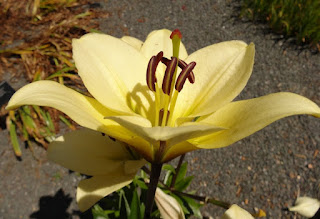 We were due to meet Kevin Giddings and his wife Katie at about noon in Ashdown forest where they are currently converting their retirement home from an old cottage. Driving through very pretty countryside we finally crossed a (not too deep) ford, which seemed to be the entrance to their property. I would imagine that the height of the stream in the winter would give them their own mini-moat.  All very impressive. I especially liked the exposed old beams in the bedrooms. They planned for us to have lunch at Ashdown Hotel. What a beautiful place it was. Here I am with Kevin and his wife, Katie in the gardens of the hotel prior to our magnificent lunch. 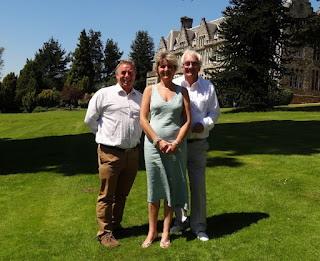 I’d also taken the large painting of ‘The Royal Flueologist’ to show Kevin. Here he is with the watercolour – pity about the reflections. 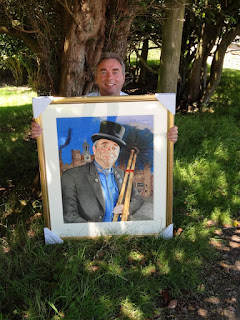 After lunch we went into the chapel in the grounds of the hotel. Once occupied by nuns it houses scores of beautiful stained glass windows. They looked very modern to me. Here’s one of them. We tried to figure our which members of which pop groups they mostly resembled. 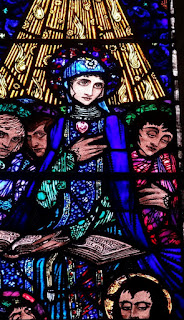 Before we made our way home we thought there might be time to visit Chartwell in Kent – Sir Winston Churchill’s beloved home. I am a great admirer of Churchill and have painted his portrait many times in various situations.  Unfortunately we arrived at Chartwell too late to visit his studio in the garden but nevertheless had a really interesting tour of the house. 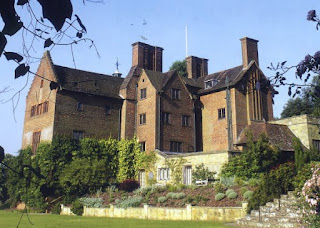 Sir Winston Churchill lived at Chartwell from 1922 until his death in 1965. I’ve written too much in this blog so won’t goon much more. But I did enjoy going round the house. Especially interesting to me were the many portraits and other paintings dotted around every room. So that was the weekend – a bit tiring with so much walking, but we saw a lot and enjoyed ourselves immensely.

To end this blog, here’s a picture I took on Tuesday evening, looking out over Jane and Brian’s garden. We had been invited there to dinner and as it was so warm and tranquil we dined on the terrace overlooking the garden. A very English, and very nice, evening. Brian cooked lamb on the barbecue and Jane made her ‘special’ Pimms. 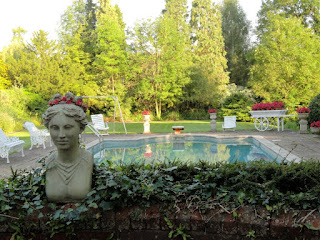