The Queen Came to Henley

Yesterday was a red-letter day for Henley. Four thousand people were invited to a garden party in the grounds of the Henley Management College as part of the celebrations for the Queen’s Diamond Jubilee.
I was invited by Tony and Jackie Hobbs to be a guest on board their cruise ship ‘The New Orleans’ 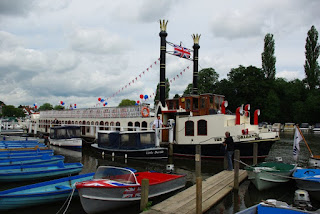 We all dressed up in our Regatta finery and boarded at 1.15. It was a gloriously sunny day, and as soon as the funnels were lowered we passed under Henley Bridge and went down below for a while. There I joined my cousin Jim and Val, Mollie, and Val, my sister-in-law. 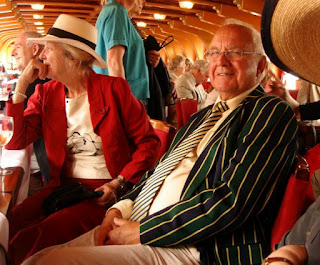 On board we drank Pimms and generally made merry. I knew most of the passengers, and because I wanted to be in a good position to take photographs of some of the boats that had been in the London Jubilee RIver Pageant, I was allowed to stand at the front of the boat. 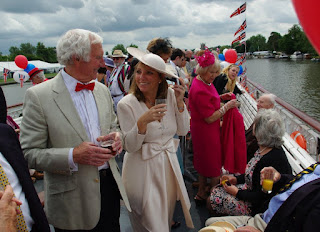 Because we were to be part of the Henley River Pageant we hovered around Temple Island for an hour or so until all the boats were lined up in the right order. The Queen was due at Hambleden Lock at 2,45 where she was to board the 130 year old ‘Alaska’ which followed ‘Black Watch’ out of the lock. 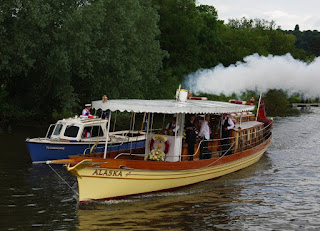 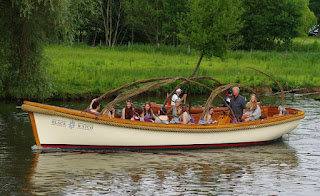 About 30 boats from Oxfordshire, Berkshire and Buckinghamshire were taking part in the pageant, depicting the last 100 years of the river. It was divided into seven eras, with boats ranging from commercial to wooden river boats. Even Ratty and Toad from ‘The Wind in the Willows’ were represented.
﻿ 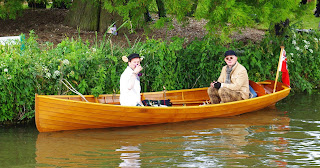 I also spied a skiff, which looked as if it was from ‘Three Men in a Boat’ – although the third man must be temporarily taking advantage of a nearby bush.
﻿ 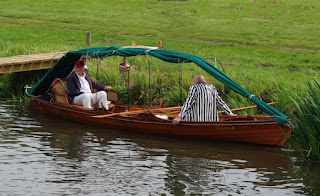 As we slowly passed by the College I saw Paul Ludwig, The Queen’s Bargemaster, and one of the Watermen in their red uniforms standing by the water’s edge when the Queen alighted. You can see the Queen, The Duke of Edinburgh and the Lord Lieutenant of Berkshire sitting under the shade of an elegant tent in the gardens. 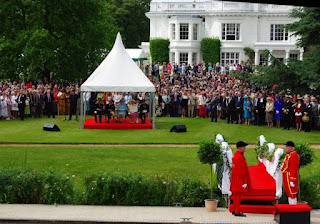 There were some really interesting boats taking part in the pageant, including three Dunkirk Little Ships, a couple of Swanuppers skiffs, and a frightening boatload of very loud and frightening Vikings. Here are just a few of the participants glistening in the bright afternoon sunshine. 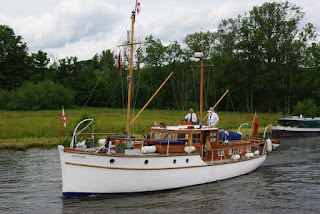 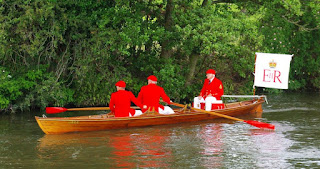 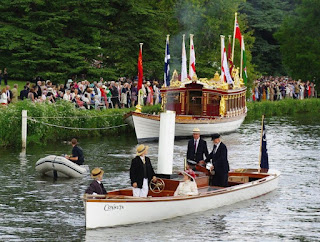 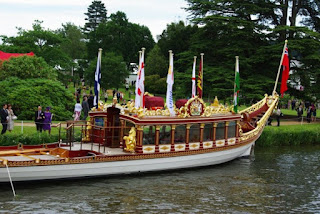 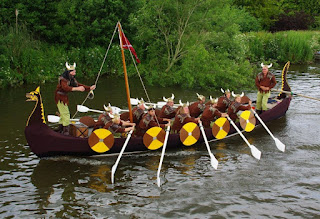 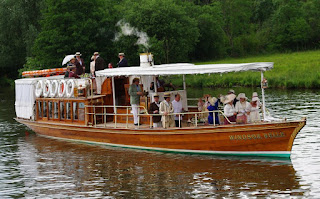 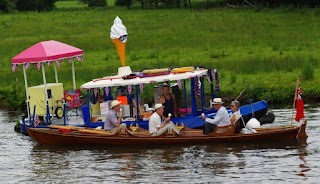 Apparently the Queen really enjoyed the day. Here she id greeting some of the guests.
﻿ 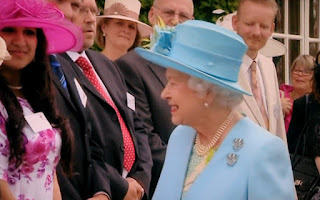 On the way back, as we passed the college for the second time I noticed a couple of black-clad figures sporting enormous binoculars and part-hidden on the roof. The one on the right is my armed policeman nephew, Tim, keeping a watchful eye on the proceedings as part of his duty in protecting the Royal family. 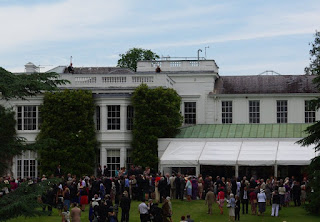 What a lovely afternoon we all had.

Soon after arriving back at the moorings I drove to the Henley Bowling Club and played till 8.30 pm – and even managed to win my game for a change (with the help of a knee brace).

On Saturday evening my young friend and I took Val out for dinner to The Swan at Streatley. We couldn’t sit outside because the rain was coming down in bucketfuls!
And talking of water, we took ‘Marsh Mundy ‘ out for its first outing of the year on Friday evening, but weren’t destined to get very far. The engine stalled and sputtered and we ended up clinging to a couple of mooring posts a hundred yards or so down the river! However, in fits and starts we managed to get the boat back to my mooring without crashing into the mill wall, thanks to the adept manipulation of the boat hook by my young friend. A call to Ivan, the boatman, resulted in the boat being towed downstream to his workshop. I feel like I’m pouring money into a bottomless bilge, as he discovered my petrol tank was half full of water and needed to be completely drained. (I put £50 worth of petrol in the boat only the day before)! Hope its repaired before Saturday as I plan to take a few friends out to see the Regatta fireworks in the evening.

Last Sunday we went to the Harpsden Fete. As usual I had a go at most things – especially the bowling – but didn’t win this year. In fact, after a few attempts I gave up as I only managed to knock 9 out of 10 skittles down.
﻿ 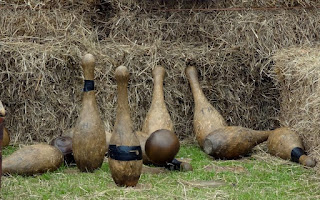 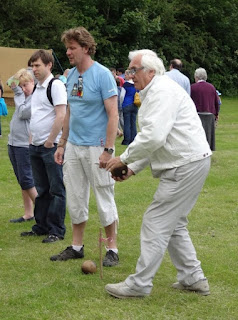 Apart from all this jollity I worked all week on this miniature of the Queen’s Bargemaster. As you can see I’ve set him against the Tower of London and you may just see a part of the Royal Barge ‘Gloriana’ in the foreground.
﻿ 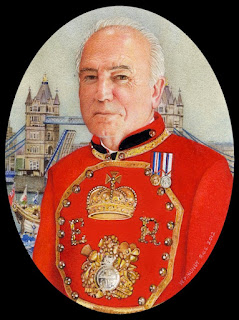