Last Sunday the Mundy family congregated at Val’s house for our traditional Easter get together. There were seventeen of us this year – we missed Louisa and her family as they are away sunning themselves in Florida. The Maltsters Arms in Greys, near Henley was our lunchtime venue. 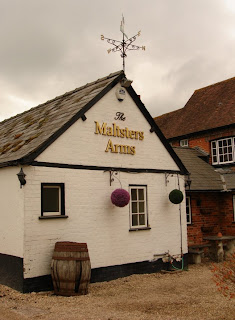 It was Val’s first outing after her knee replacement operation, and she managed well with crutches. Usually we play the ‘money’ game in the garden after a big exchange of Easter eggs and although I’d filled a big bag with coins collected over the year, we somehow forgot to play till Charlotte reminded me we hadn’t played the game. As some of the children had already left by then it was too late so we’ll have a rollover next year.
Tim had pollarded the apple tree earlier in the week but here we all are gathered under the tree 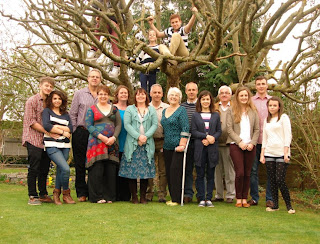 I finished the miniature of Kevin Giddings, the ‘Royal Flueologist’, last week. Here he is complete with soot on his face and a background of some of the chimneys he’s responsible for at Hampton Court Palace.
﻿ 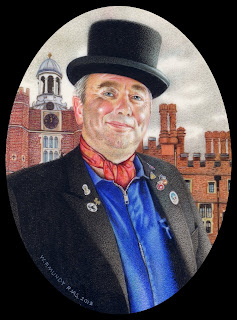 Next week I plan to start a life size oil painting of Kevin complete with his Victorian flue brushes.
On Saturday my young friend and I paid a visit to West Wycombe and the Hell Fire Caves. 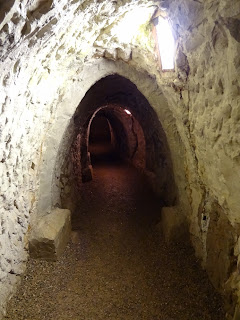 We first attempted to reach them by climbing up this very slippery and steep grass and chalk pathway (it’s very much steeper than this photo shows) but by the time we got to about 20 yards from the top it became much too difficult, and a bit too dangerous, to go any further. And as it was impossible to go back down standing up I lay down and bumped all the way to the bottom on my backside! 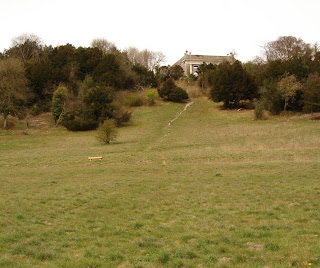 Sir Francis Dashwood is the Eleventh Baronet of West Wycombe. The Knights of St Francis of Wycombe or the Hell-Fire Club as it was later called was a natural progression from earlier clubs founded by Sir Francis such as the Dilettanti Society which was started in 1733 to encourage interest in classical art. I won’t go into the notorious history of the Hell-Fire Caves – it would take too long, but suffice it to say they have provided many fascinating tales. The ‘Ghostbusters’ team from a television company spent several nights deep inside the caves and have, on several occasions, reported seeing many ghostly apparitions. The caves extend 300 yards underground and were all excavated by hand and hewn out of the chalk and flint hill. We went all the way through the caves - parts of which were quite scary. Here are a few of the things we saw, starting with this carving of the Roman numerals XX11, which is probably a measurement in poles of the distance from the entrance. (But it is possible that they refer to a secret passage, which is said to run from the caves to the church.)
﻿ 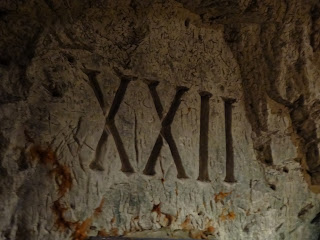 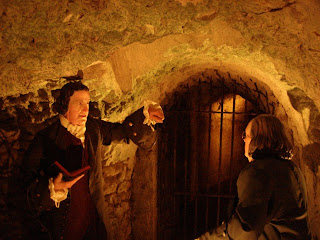 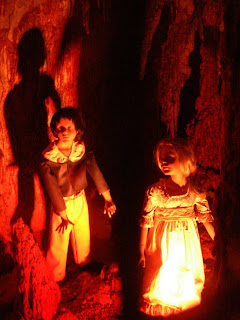 We walked up to the Mausoleum after our cave visit, and on to the church. 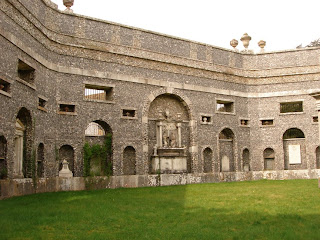 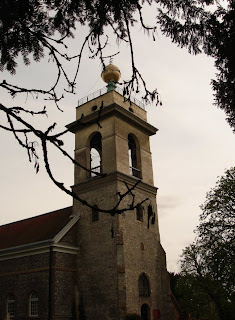 You may have noticed the golden ball on the top of the church. On a previous visit I climbed up to it but on Saturday it was closed. The ball is big enough to house six people and in times gone by card games were held inside the ball. The views from the ball are quite spectacular and extend over many counties. 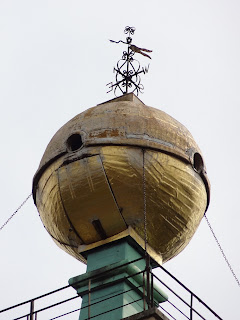 Yesterday, on the one-hundredth anniversary of the sinking of the Titanic, I was asked to appear on Debbie McGee’s Sunday morning BBC Radio Berkshire’s show and talk about the time I was commissioned to paint a replica portrait of a miniature owned by Helen Churchill Candee – one of the survivors of the tragedy. When the passengers were told to abandon ship she carried her favourite possession - the miniature - with her, but because she wasn’t allowed to take anything with her on the lifeboat – and as women had no pockets in their dresses – she gave the miniature to a Mr Kent for safe keeping. Sadly Mr Kent drowned, but when his body was recovered from beneath the waves and the miniature found, because of the inscription on the back of the gold case, it was returned to its rightful owner. The grandchildren of Helen Candee intended to sell the miniature at a special Titanic auction hence the desire for a replica. Here  is my painting. 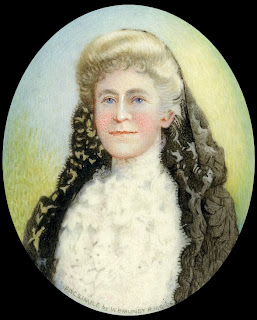 If you want to read about the countryside have a look at my cousin Paul Carter’s blog. He started it last week. Paul is a man of many parts – he and his wife Josephine have created a lovely extended family, breed cattle, and Paul runs a very successful company producing innovative alarm systems. If you are interested in reading about the countryside here is the way in: paulandtheenglishherefords.blogspot.co.uk.
The more I hear about our crazy Health and Safety laws the more I despair. Just the other day a seagull had become tangled up in a plastic bag in a 3-foot deep pond. The fire brigade was called and believe it or not 3 fire stations responded by sending a total of twenty-five firemen to the scene. But apparently an ‘on the spot assessment’ ruled that it was too dangerous! So twenty-five burly firemen stood by the shallow pond stood there doing nothing. (Obviously because of orders from their respective politically correct commanders). Eventually the seagull was rescued – but not by the firemen – a passer-by put on a pair of waders and walked into the pond to retrieve the seagull. The London Fire Brigade were unrepentant about the incident by saying that ‘the health and safety of its staff must take priority’.

In contrast I read the other day about a blind lady called Trish Vickers. She’d lost her sight through diabetes, but had decided to try and write a novel. She was writing it entirely in longhand but was horrified when her son visited her and told her the last 26 pages were left blank as her pen had run out of ink, and there was no way she could decipher what she had written. But sometime later she had a brainwave and wondered whether fingerprint experts could decipher her words from the indents in the paper. The Dorset police heard about her dilemma and forensic experts there sacrificed their lunch hours and used their forensic knowledge to read the very faint impressions left on the pages. Good for them.