I just love watching craftsmen working. For example when the TV programme ‘To The Manor Reborn’ where an old mansion was being restored on behalf of the National Trust, it was wonderful seeing all the craftsmen (and women of course) painting, sculpting, carving, and demonstrating real traditional skills. I used to love watching my father working in his shed – he was a carpenter – and to smell the aroma of freshly cut wood. Also the other evening watching Darcy Bussell on TV emulating dances from Hollywood shows, including ‘Singing in the Rain’ and ‘Cheek to Cheek’, it was so good to see her versatility. On Saturday when I visited Rolf, not only does he paint, sing, write and compose music, he’s a wizard with wood. He was carving a beautiful, and very heavy, bowl from a great lump of intricately grained beech, and adding all sorts of artistic touches to it.  And a friend of mine who now lives in Australia – we were advertising executives in Asia for many years – and is now retired, took up woodworking several years ago. His workshop is immaculate and he specialises in creating fantastic marquetry. Here is Roy Howard carving a spiral staircase, and the following picture shows a cutlery cabinet with a design based on another of my favourite artists M.C. Escher.
﻿ 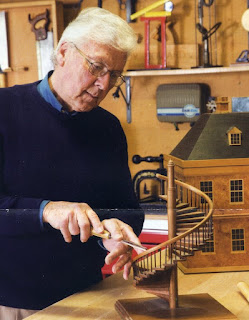 I could spend hours just watching experts working. This includes painters, gardeners, blacksmiths, farriers, sculptors, cooks, designers, watchmakers – I could go on and on.
Christmas was spent with an assortment of relatives. Here is my five-year-old great niece, Kate, on Christmas day playing with her little monkey (who sways around in time with whatever music she puts on to the little device she’s holding in her hand). 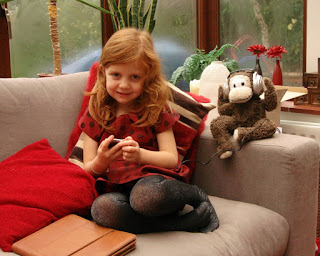 I must show you the letter she sent to Father Christmas. The drawing of Father Christmas shows him with a black beard, but she’s remembered he has a hat with a bobble on the end 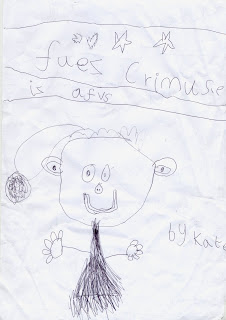 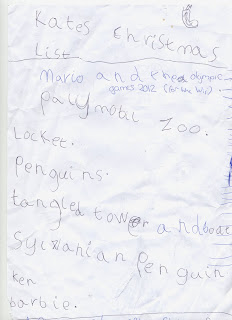 And yes, she got everything she asked for – lucky little girl.

Boxing day lunch was spent with Felicity and her family and friends. Then in the evening I drove over to my nephew Tim and his family in Twyford. Tim is a firearms instructor in the Thames Valley Police Force, and just last week he was awarded a medal at the Chief Constables award ceremony. He already has won several commendations but this is his second medal. 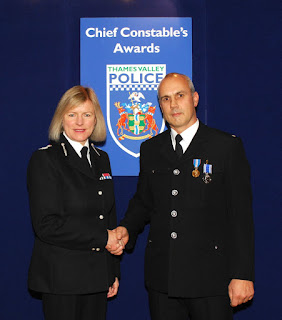 Talking of nephews, my eldest, Neil, has just been told he will be a torch bearer for the 2012 Olympics and will be carrying the Olympic torch somewhere between Portsmouth and Southampton in the summer.
Florence Pike, my late friend Susie’s 91-year-old mother, invited me, together with Val, to lunch last Tuesday. Susie died at the age of only 40 almost 20 years ago, and at the time I made two large boxed leather-bound photo albums depicting her life, which I intended to give to Susie’s daughters, Nichola and Katie, when I considered them old enough to take care of them. As they are now 27 and 25 I thought that now would be a good time to hand them over.This is a page from one of the albums – It shows Susie with her two little girls and on the opposite page (obscured in this photograph by the interleaved tissue) I wrote a poem describing their life, friends, pets and nannies etc, at the time. 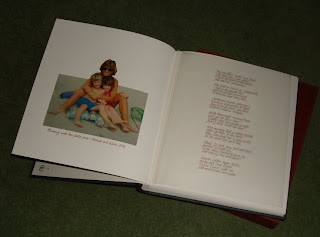 Both Nichola and Katie were absolutely delighted with the albums as they had no idea that I had made them all those years ago. Here they are last Tuesday with the books on their laps. 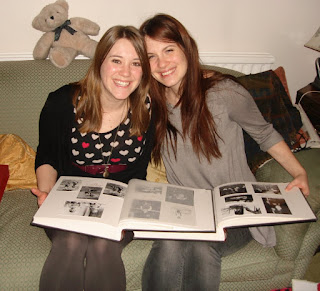 .
On the way back from Florence’s we got completely lost in the dark. Although I was using my sat-nav, at times the oncoming lights of cars were so dazzling I couldn’t turn right when I was told to because the roads were not lit at all and for all I knew I’d end up mounting the kerb! so the journey home took twice as long as it should have done. Home at last I was so whacked out I meant to just flop out and watch TV. But having made a Christmas cake from a special promotional free box of Delia Smith’s ingredients a few days earlier, I decided I'd better cover it with marzipan and icing sugar. I won't tell you how I got on, other than to say I ran out of icing sugar and knocked over a whole box containing hundreds of little silver balls. (I’m still finding them in my kitchen). Anyway here’s the end result – the little fir trees were snitched from the ends of my artificial Christmas tree! 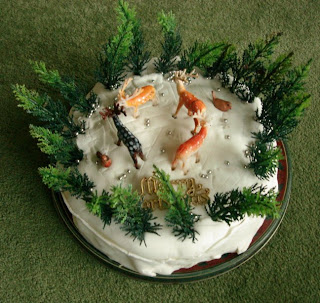 The next day Stewie (another nephew) and his delightful family came over to Val’s where she made a nice lunch for us all. Here they are, minus Annabel who seems to have disappeared somewhere. 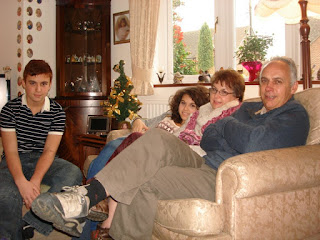 Now I’m back to my Spitfire painting – so far I’ve spent just under 200 hours on it and have only painted less than a quarter of the background, so I reckon there will be another 200 hours to go before I complete it.
Having had a really painful back this past two weeks I found a really good chiropractor – Amy – who, after 3 sessions, seems to have worked wonders. Trouble is when I crashed my car some 40 years ago in Singapore it left me with one leg 2 inches shorter than the other, the result of which is now probably coming home to roost. Amy also used acupuncture, which probably helped a lot. So now the back is better and I’ve been given a clean bill of health with regard to the cancers, I look forward to a healthy and happy 2012.
And as the clock reaches midnight here are some of the scenes in London right now. 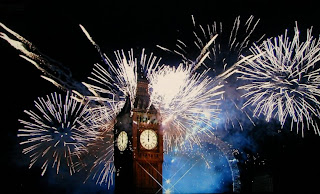 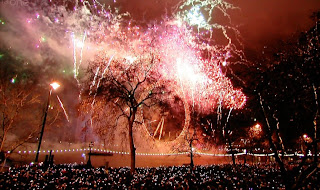 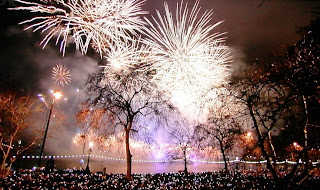 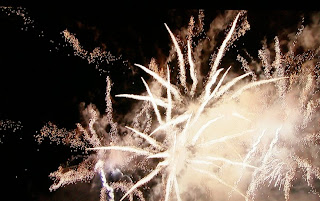 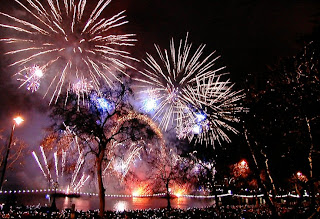 Finally, to all my friends, wherever in the world you are, may I wish you a very happy, healthy, and peaceful New Year.