Last Friday evening I went to a very special dinner at the invitation of Michael Skinner. The Windsor, Eton & District Royal Warrant Holders Association were holding their Annual Dinner at The Guildhall in Windsor. 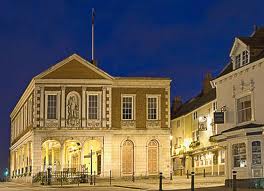 ﻿Amongst the 100 guests were many holders of this rather special Warrant. The President, who made a very witty and amusing speech, is in fact the Queen’s Chimney Sweep. With tongue in cheek, I’m sure, he styles himself as ‘The Flueologist'.
The Guildhall was designed by Sir Thomas Fitz in 1687, but because he died before it was finished, Sir Christopher Wren oversaw the completion two years later. The building has an open ground floor supported on columns and arches of Portland stone where a corn market was held. However the four columns in the middle of he Guildhall are purely decorative as the town burghers demanded extra supporting pillars for safety reasons, despite Wren’s assurances that none were needed. Although these were installed Wren had the last laugh as he left a gap at the top (described by Chris Ginnett, one of the speakers at the dinner as being ‘the width of a Cumberland sausage’). I took this rather grainy picture of the columns as we left at the end of the evening. 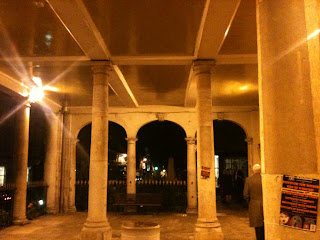 While relating this story Chris Ginnett said that at the end of his speech he would ask all of the assembled company to stand on our chairs and at the word of command to all jump to the floor (We were directly over the non-supporting pillars). This, he said would result in one of three things. 1. Nothing would happen. 2. The floor would shake a bit. Or 3. We’d all go crashing down to the ground! He also said that the room we were dining in could support 100 people, and as we were 102 on that evening he hoped the other two were thin people. We didn’t chance it so remained seated. It was a lovely evening, with very amusing speeches, great food and for me a great pleasure to be surrounded by so many beautiful portraits of Royalty past and present. During the pre-dinner reception I met several men wearing their Malaya GSMedals, so having had mine in my top pocket, I joined these old soldiers and sported my own.
As we were leaving I suggested to Michael that I’d really like to paint a portrait of the ‘Royal Flueologist’ in his working gear - in other words with a battered black top hat set at a jaunty angle and smudges of soot on his face.
With so many interesting and talented people at the dinner, ranging form the Queen’s Vet to Her Majesty’s Groom, I also suggested that a dinner where everyone wore ‘the clothes of their trade, would be such a wonderful and colourful affair.

I finished my sepia painting of Jane wearing a black lace blouse the other day. Hopefully, together with the large pencil drawing of Rolf Harris and probably an oil or large watercolour I have in mind, by next spring I’ll have my three pictures ready for submission to the Royal Society of Portrait Painters Exhibition in London. 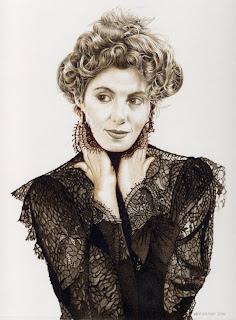 It’s always lovely to meet old friends you haven’t seen in a while, so it was great to pick up Val and drive over to Joanne’s in the Cotswolds on Sunday for a sumptuous lunch where Ben Salter and Katinka were already there. Ben is an old friend from boyhood days. He joined the RAF and became the purser on the Queen’s flight for many years. While based in Singapore in the seventies a tragedy befell them and they were wonderfully looked after by Joanne and Chris Dalston – Chris being the CO and Wing Commander there at the time. Katinka has recently arrived back from the USA to be with Ben, so we had a really good time reliving some of the very happy times we all had together. 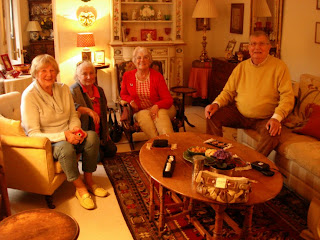 The Wentworh Wooden Jigsaw Company has just, this week, launched their Christmas selection. Amongst them is the painting I did several years ago of ‘Cobwebs in the Barn’. The original painting depicted an old barn belonging to my friend, Sue Webb. She remarked at the time that she, her family and ancestors had lived in the seventeen century cottage next to the barn for many years and she’d never before noticed the little snow-covered cottage seen through the barn windows. (I told her later that, using artist’s licence, I’d made it up!) If you are interested in getting a copy of the jigsaw puzzle, here's a link. 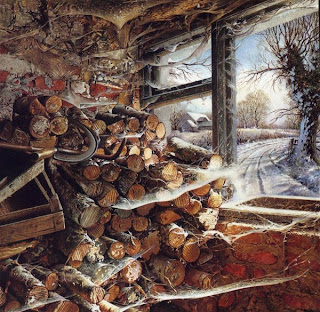