Spoiled by the Weather

In 1963 I visited Venice, courtesy of the Singapore Government, to select ‘smalti’ or glass mosaic pieces, for the construction of a large mural I’d designed to be erected at the (then) Singapore Airport. While in Venice I bought a couple of dozen bags of smalti with the aim of making my own mosaic when I returned to Asia. This I did a year or two later when I went to live in Bangkok. It was of a pair of Thai dancers. It eventually adorned the centre of a teakwood coffee table I had made. Unfortunately the large mosaic was much too big to fit into my relatively small flat when I returned to live in England. So for the past 30 years it’s been residing on the floor of one of my outside balconies. Big mistake, as over the years, being exposed to the ravages of our weather, and at times left covered in snow, some of the pieces have deteriorated - especially the lighter colours. My reason for mentioning this is to ask if anyone out there in cyberspace knows how to resurrect glass to bring the mosaic back to its former glory. I fear, however that the damage is too far-gone, but anyway this is how it looks today. 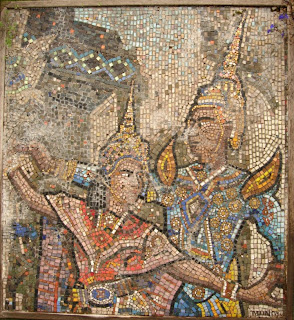 And these close-ups show the sort of deterioration – even on the brighter colours, which are nearly as bright as they were 40 years ago. Any suggestions, folks? 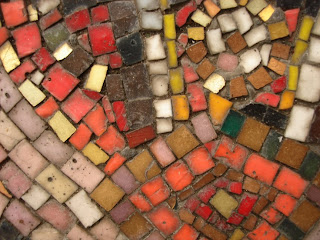 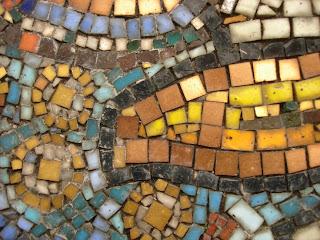 The season has almost finished as far as boating and the river is concerned. We have to snatch those sunny days to take advantage. On Saturday I went to the ‘Regatta for the Disabled’. Held in the grounds of Phyllis Court, all sorts of watery activities took place. This boat, sometimes used on Royal visits to Henley, is called ‘Royal Thamesis’. 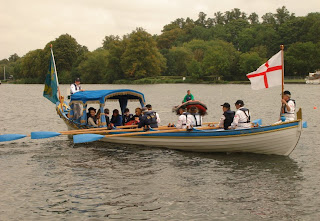 The main event of the day was Dragon Boat Racing. As the races were open to anyone, as well as the disabled, I was hoping to collect a crew together, but asked around a bit too late. Here’s one of the boats and a close-up of the dragon prow. 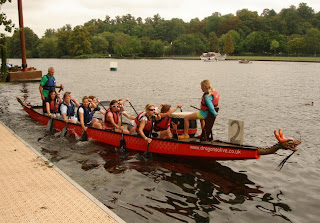 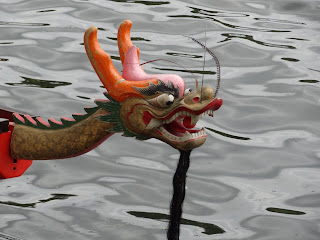 You can hear the drumming in this little video of one of the races,
We took a trip down the river later in the afternoon, passing this lone black swan on the way.
﻿ 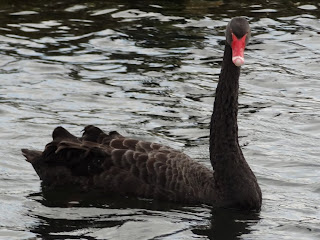 Although on Sunday morning it rained most of the time I still intended to go the Greys Village Fete in the afternoon. Luckily the rain stopped before two. Too late for the Marlow Town Band to perform, as they were afraid of getting their instruments wet. Lots of stalls were open when we arrived at the fete. Here are the ladies who make cakes.

And this brave man is having wet sponges thrown at him.

I had a go on the rowing machine. Luckily only ten pulls at a time as it was set at maximum resistance. I didn’t beat the record.
﻿ 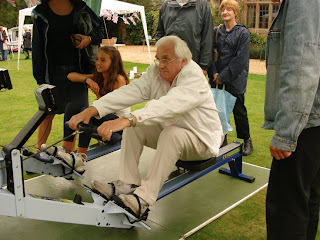 Also, as usual, I tried everything, from the raffle, coconut shy, throwing a ball through a clown’s mouth, removing nails from a board, tombola, (where I won a measly can of pop), to the golf game. 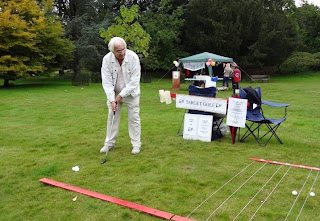