In 1974 when I was living in Singapore I placed a little silver cup on my table and painted what I saw in the reflections. Here it is. 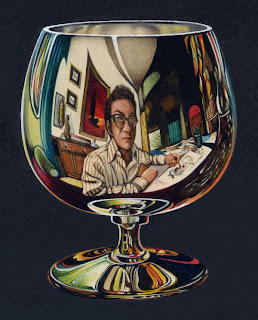 I was 38 at the time and was only able to paint during the rare weekend when I wasn’t travelling in Asia. Recently I unearthed the painting – it’s less than 4 inches wide – and decided to update the image by painting a companion piece. Many years have gone by, my hair has turned white and I now paint full time. You might be interested in the result. The first was painted on watercolour board and the latest – completed just last week – is painted on vellum.
﻿ 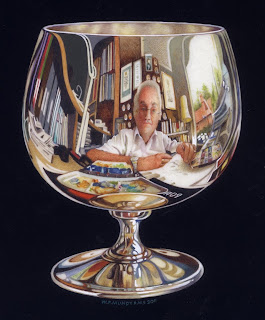 Much of what I’ve been doing over the past week or so has involved boats. The new cover I had made for my wooden dinghy was too big – rain collected in it, so it had to be altered. Yesterday it was retuned, but unfortunately was now too small! So back to the drawing board as it has to be made all over again.
Last weekend the rain pelted down all morning, but by afternoon the clouds cleared and I made my way to the Thames Traditional Boat Rally along Fawley meadows. 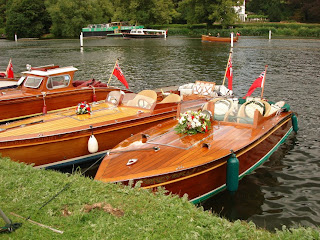 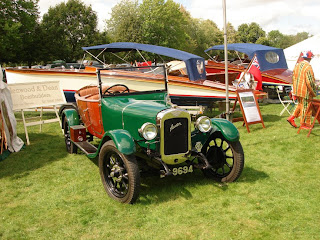 Amongst the many attractions along the river was a ‘boat jumble’ where I bought a really noisy hoooter. This is for my big boat as the fitted one doesn’t work any more.

Great to see Raymond Baxter’s Dunkirk boat L’Orage beautifully restored by its new owner, John Calvert. There were over a dozen Dunkirk boats moored there for the weekend. Here are some of them. 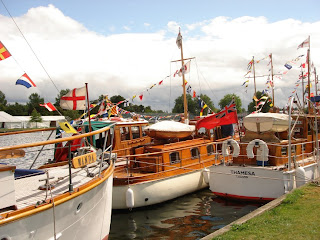 ﻿Later in the evening I returned to the site with a friend to see the illuminated procession of boats. Also there was a large collection of old bicycles. Amongst them were several ‘Penny-farthings’ Here they are getting ready for an illuminated cycle ride 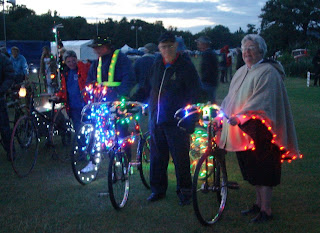 They were a bit too fast for my camera, but I like the artistic effect of this shot. Soon afterwards a small procession of boats glided past in the darkness. Again the images are distorted, but interesting for all that.
﻿ 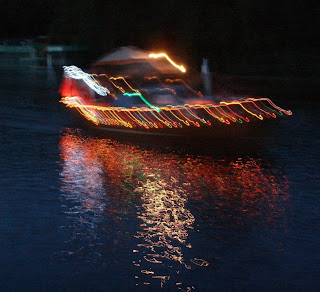 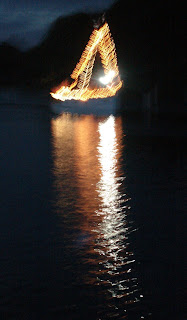 To complete this week’s boating activities, on Wednesday the Swanuppers reached Henley. Originating in the 12th Century, when the Crown declared ownership of all the swans on the Thames, representatives of the Crown and the Vintners and Dyers Livery Companies make their way upstream in traditional rowing skiffs to corral and mark the new signets. They started on Monday at Sunbury Lock and will reach Abingdon today (Friday). In the past, nicks were made in the signets' beaks to identify which family they belong to – Queens, Vintners or Dyers – but nowadays their feet are ringed with individual numbers. I joined Nigel, the lock keeper at Marsh Lock, his mother, Arthur and a few other friends for wine and Pimms to await their arrival. Here they are coming into the lock.
﻿ 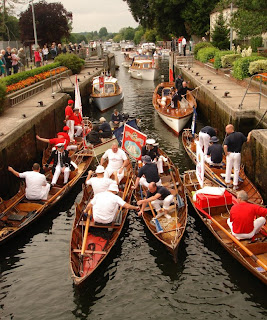 Only two pairs of swans with three signets each were found on the Henley reach this year. Sadly a total of 180 mute swans died on the Thames between Reading and Windsor last year from a common duck virus. However David Barber, the Queen’s Swan marker (below) said things would be rectified over time. 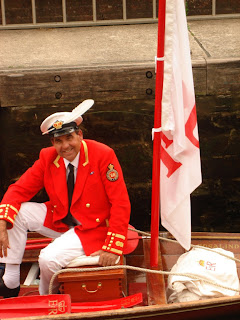 I took a little video of the Swanuppers as they left Marsh Lock. Hope this comes out.