My second cousin, Jane, arrived from London on Thursday morning ready for the Henley Regatta. I’d planned for eight of us to go to Phyllis Court for the day, We drove to Wargrave about 11 am to pick up Debbie and Paul. Here we are all dressed up in our finery. 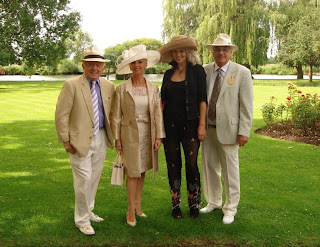 Paul and Debbie, although members of Phyllis Court, hadn’t received their badges, nevertheless we bypassed security at the entrance and wandered through the grounds and over the humpback bridge spanning the creek. 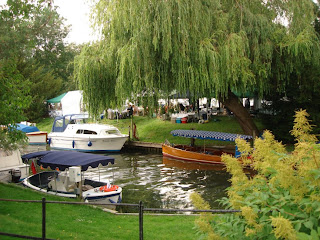 The lawns looked immaculate and we soon established ourselves at a table by the verandah. Debbie and Jane procured a large jug of Pimms (what else at Henley Regatta?) and we waited till the rest of the party - Dee, Bill, Jane and Brian – arrived. Unlike many of the summer social occasions in England these days Phyllis Court at Regatta time retains a real air of almost Edwardian elegance. The men wear jackets and ties, and all the ladies wear beautiful colourful hats.
Way back in April I’d endeavoured to be first in line to buy the tickets (I was second as it so happened) so after a while we made our way to the best table in the dining room. 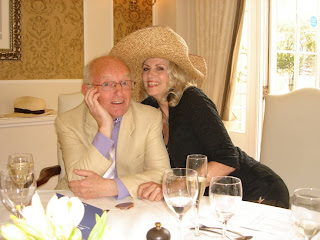 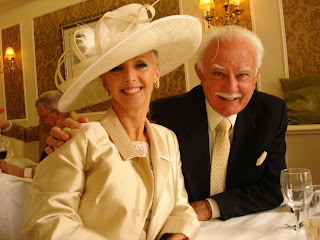 Not only was the meal sumptuous, but the company was great. Laughter echoed around the table with Paul, as usual, reeling off a host of amusing stories. Everyone had a very happy time. We eventually made our way to the riverside – after all there was a regatta going on
﻿ 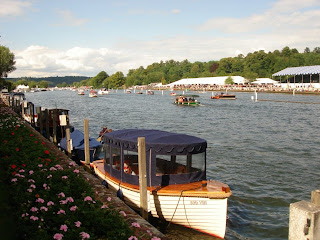 On the way I wondered why Jane and I were given a few stony looks by some of the more elderly ladies as we strolled towards the water's edge. We soon found out the reason as no sooner had we taken our places than a black clad, heavily muscled security guard came up to Jane and (too loudly I thought) asked her to accompany him to the exit as she was ‘inappropriately attired!’. It was only then that I realised Jane was wearing culottes – a terrible crime in Phyllis Court at Regatta time. ( I must admit I had no idea that the long black semi-transparent dress she was wearing was divided as I am aware of the dress code on these occasions - and fully agree with it).
Not wanting to appear to be a criminal by following the guard as if to an awaiting hangman’s noose, we waited till he had retreated a little and discussed the situation. Dee came up with the solution by getting a taxi to her home and fitting Jane out with one of her dresses. (It showed a lot more thigh than the original dress, but  was obviously more acceptable than a divided skirt).
Happily all’s well that ends well and here we are correctly dressed as we watched the races from our vantage point. 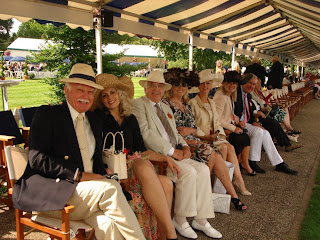 About 6pm I had to dash to off for half an hour or so as I’d been asked to officially open ‘The Heart of Henley Art Exhibition’ at St. Mary’s Church in the centre of the town. A number of the exhibits were by primary pupils of a local school and I was quite impressed with the imagination they showed in following the theme of ‘water’.
Back to Phyllis Court for drinks with a number of friends before calling it a day and going back home to watch the Murray/Nadal tennis match I’d recorded earlier.

On Friday I painted all morning - currently I’m working on an interesting miniature of a friend of mine called “Shining Bear”. Among his many talents Bear plays the didgeridoo with Rolf Harris at concerts. However the sunshine beckoned, so in mid-afternoon I downed brushes and tootled down to Phyllis Court once more, this time to meet Felicity and her father Martin. 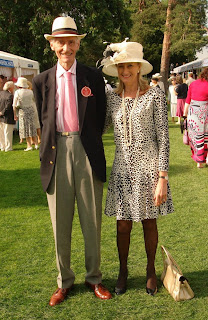 Martin’s neighbour was there too, and she and Felicity had a great time trying on hats in a little stall set up by the river. 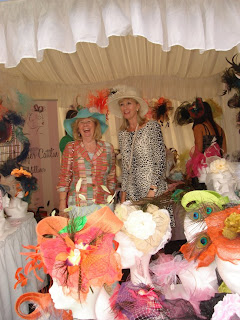 Earlier in the week I completed the remaining two miniatures of my great nieces. Here’s Annabel. She’s just seventeen… 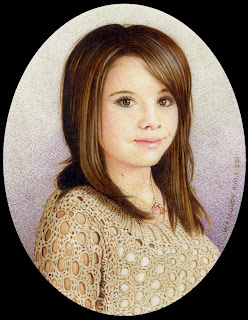 And this is Genevieve, who’s almost sixteen… 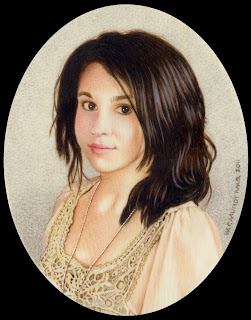 Yesterday my young friend and I invited Val, and Sue and Tom Yonker over for supper prior to taking Marsh Mundy down the river to see the fireworks. Every year on the Saturday evening of the Regatta a firework display is put on by the town. The best vantage point is from the river itself. We started off just as the sun was setting
﻿ 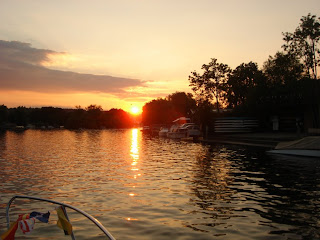 On the Berkshire side of the river the noise of all the many hospitality tents roared out at us all the way up to Temple Island. With the glare of lights and the thousands of people thronging the riverbank I was very pleased to be watching the revelry from my boat rather than being part of it. (Sign of age?) On our way back we saw Alan and Christina Tang gliding by in their very smart boat, so we invited them to tie up next to us when we found a place to moor. As the booms at the vantage point we chose were empty we endeavoured to throw the ropes around them – a very difficult task. But luckily a kind pair of Environment Agency boatmen in their launch stopped to help and we were soon safely attached to the booms to await the firework display. I’d brought a bottle of pink champagne but unfortunately it was corked, so reluctantly I had to pour the contents into the river. Never mind, we had plenty of Pimms and soft drinks and the Tangs offered us wine and cherries picked from their garden that morning. At  about 10pm the fireworks started. 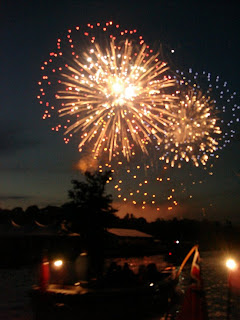 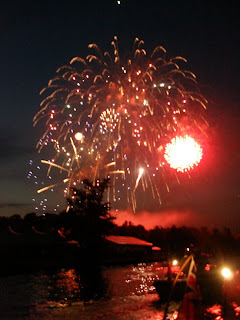 On the way back home in the dark I often wonder why there are rarely collisions as so many small boats don’t have lights, but the ambiance of the river at night, with hundreds of boats of all sizes is really exciting. We got home safely just after eleven. The end of another lovely day.