If there’s one thing that really riles me it’s injustice. So I was incensed to read about Lymington Pier Stationmaster Ian Faletto last week. This man who has devoted three decades of his life, giving a truly dedicated service, has been sacked for removing a shopping trolley dumped by vandals on the railway line. Not only has he lost his job but has been stripped of his pension and his mortgage protection, which could lose him his home.
Mr Faletto has, over the years, won 25 awards, including ‘Most Improved Station’ and ‘Best Kept Station’ four years in a row. He’s spent his own money on carpets, heaters and flowers as well as handing out sweets and jigsaw puzzles to passengers. So what possible justification have the pathetic little jobsworths given for this totally unreasonable and unjustified action? Yes, you’ve guessed it – ‘Health and Safety’! In their pathetic reasoning the bosses of South West Trains decreed that his prompt action in removing the trolley warranted his sacking after 27 years of dutiful service.
Apparently, when Mr Faletto arrived at 8.30am and spotted the trolley, he immediately contacted the signalman to request the power to be turned off while he jumped onto the line in protective shoes to remove it. A week later, while trawling through CCTV footage, a district manager concluded that the power had not been switched off. Ian Faletto was then suspended and summarily sacked following a disciplinary hearing.
Most people would have thought that preventing a probable very serious accident would have earned praise. But no, not in these days of blind adherence to ‘Elf ‘n’ Safety’ rules by little Hitlers.

What’s happening in this country? Another incident caught my eye the other day, where a respected deputy head teacher was sacked after a 20 year career, without a stain on her character, for helping to carry a boy of 6 into school after he refused to leave the playground. Debbie Ellis was accused of ‘physical and emotional abuse’ even though his mother made no complaint. What would have happened if the boy had been allowed to stay in the playground on his own and strayed onto the main road, or worse, had been abducted by a stranger? No, this was not even considered by the governors who sacked her for ‘gross misconduct’. Incomprehensible isn’t it?
My Granddad, pictured here brandishing his walking stick would have really stirred things up as he, like me, hated unfairness in all its forms.﻿ 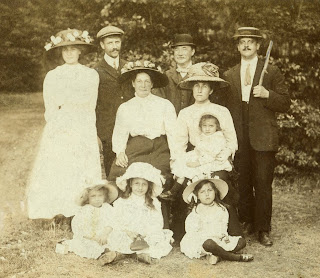 So what has been happening in my semi-rural life this past week?  Although I don’t really think much of my face I’ve started on a self-portrait.  Most artists attempt this sort of thing some time in their careers (I was commissioned by the leading American collector of miniatures some years ago to paint a miniature self-portrait.  No-one saw it except the client, but as he died just a couple of months ago the portrait will now be displayed in the Cincinnati Museum of Art, I’m told.) 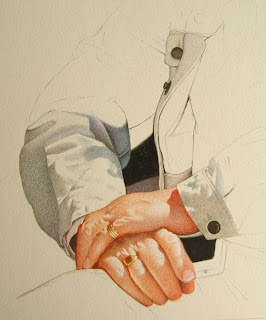 Here’s the start of the portrait – it’s in watercolour and will measure about 12 by 14 inches. I thought I’d start with the hands.
On Monday afternoon I had an appointment with the Oncologist in Reading. Happily he was very pleased with my progress and much to my amusement told me he had decided against chemotherapy, partly because I am a ‘Gentleman of a certain Vintage’ but also because chemotherapy would affect my hands to such a degree that I would no longer be able to paint with the delicacy and detail I currently employ – which would mean no more miniature portrait painting! So hopefully the next CT scan, scheduled in about 3 months time, will give a positive all-clear.
Although my computer contains about 160GB of hard disk space, my C: drive was fast running out with only 500MB remaining. My young friend suggested I buy a new internal 300 or 500GB hard drive and clone everything on my computer to it. “Couldn’t be done” said the expert at PC World. But my young friend is stubborn and never gives up until the problem is solved! So we bought a new 320GB disk online and, when it arrived the sight of her sitting on the floor with all the innards of my computer exposed to my simple unscientific gaze reminded me of a couple of incidents that Dave Champion, my Appliance Engineer friend, related some time ago.
He was called out by an American woman (an obvious DIY enthusiast) who said both her washing machine and dishwasher were not working and could he fix them. When Dave arrived she took him to her kitchen where, to his horror, she’d dismantled both machines and all the bits were mixed up with each other on the floor! (I’m not sure whether he managed to fix either machine.) Another time a man asked him whether he could claim a new washing machine as he’d forcibly opened his when it failed to open. When Dave arrived he laughed out loud as the man had tried a most unorthodox way of forcing the lid off his top-loading washing machine. He’d opened it up with a heavy-duty tin opener!
But back to my computer. After many hours of all sorts of strange things happening on the screen, from scanning to partitioning and many other incomprehensible sets of words and numbers, with the use of a natty CD called ‘Clonezilla’ I now have 320GB of extra space available. 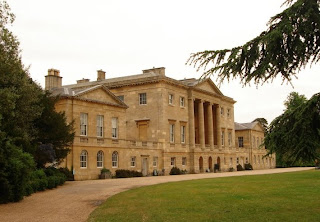 On Saturday I visited Basildon Park.  Situated between Pangbourne and Streatley, this very impressive Georgian mansion was rescued from ruin by Lord and Lady Iliffe in the mid-50’s when they restored the elegant interior and scoured the country salvaging 18th Century architectural fixtures and fittings.  One of the rooms is entirely filled with seashells in all manner of decoration. 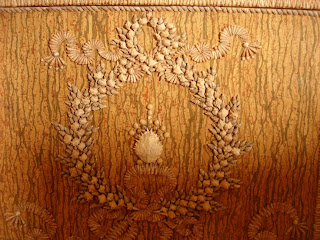 (I once went to a 1940’s wartime party at Basildon Park where we all dressed in period clothes and uniforms.  The New Glenn Miller Band played wartime songs and I made a 2-hour tape, complete with sirens and renditions of ‘We’ll Meet Again’ and ‘Run Rabbit Run’ etc.).  Here are views of the dining room and one of the beautifully painted ceilings.﻿ 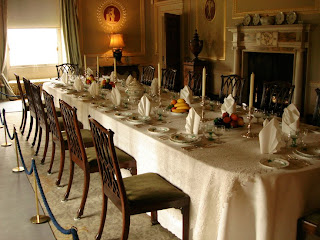 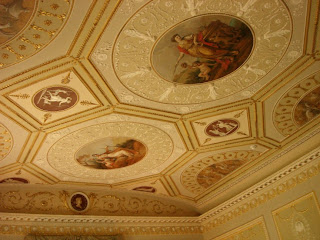 Recently recreated is an authentic 1950’s kitchen, complete with all the paraphernalia of the time.

The bowling season opened last week so on Monday evening I played my first game of the year. I’m convinced my woods have gained weight since I last used them – but maybe it’s because I haven’t quite regained my full strength. 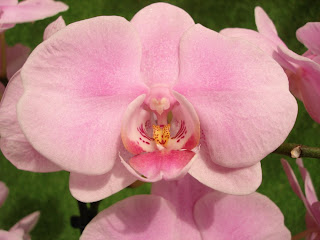 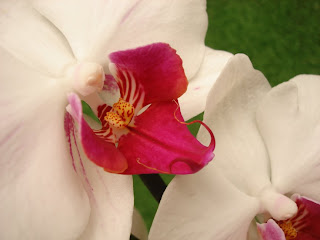 Yesterday we paid a late visit to Newington Nurseries just the other side of Warborough.  They are specialist orchid growers and have won many awards including gold medals at the Chelsea Flower Show. Entering the scented and humid enclosure reminded me of the Botanic Gardens in Singapore.  I’m quite fascinated by the incredible design of these flowers – especially when you really look into them. Maybe I’ll make a small Trompe l’Oeil painting of some of the more intricate blooms when I get the time.