A Walk by the River

My car was snowed in last Sunday – the ice slope from the garage was too dicey to risk. So my young friend and I took a walk by the river the mile or so into Henley.
﻿ 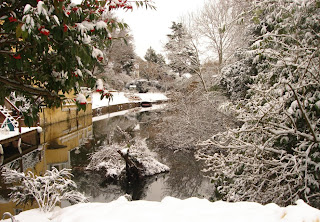 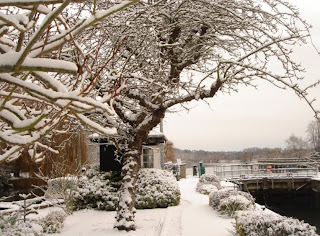 This is Marsh Lock, ably looked after by Nigel, the affable lock-keeper who, I’m told, will soon be celebrating a birthday with a nought on the end of it. Gingerly walking across the frozen end gate this scene of the hill beyond was entrancing. 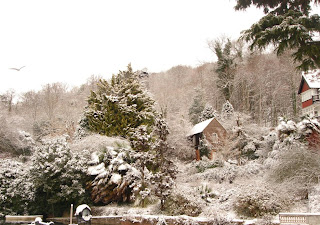 (During the Second World War under this hill a vast underground series of caves housed all sorts of secrets. I ventured in there once and with the aid of an infra red camera photographed a gigantic map of southern England on one 12 foot high wall.
﻿ 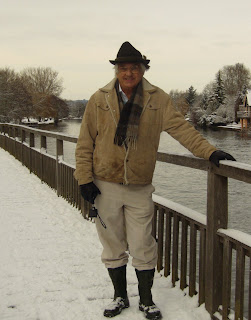 With my jaunty German hat keeping my ears warm, I tarried a while on the horse bridge which spans the river here. 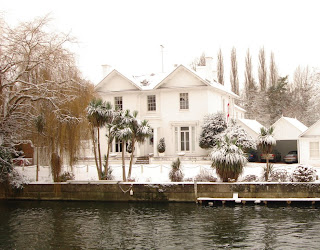 On the other side of the river is the house belonging to Jane and Brian – friends I’ve often mentioned in my blog. It once belonged to the famous Danny La Rue, and with its lovely swimming pool in the garden and extensive grounds, a verandah reminiscent of the twenties, and a well-appointed small ballroom, Brian and Jane have hosted many a party there (including my 70th).

Passing by Mill Lane, and over the little wooden bridge, we looked back through the foliage towards my flat – which you may be able to glimpse in the background. 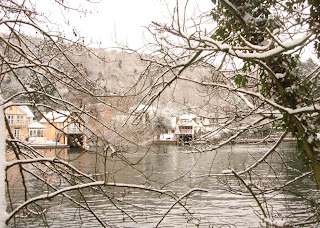 One of my favourite glimpses of river life is to see a kingfisher. It may be sitting perfectly still and almost invisible on a branch looking down to the river, but suddenly with a flash of incandescent turquoise and lilac, and a tremendous burst of speed it will dive along the surface of the water to emerge with a tiny fish struggling in its bill. I saw one on this walk but it was too fast for me to capture with my camera.
We aren’t on the Mississippi, but here comes the New Orleans riverboat. Operated by the Hobbs family I’ve been on it many times – usually in the summer and once in the autumn where I hosted my best party ever – 60 guests on my 60th birthday. 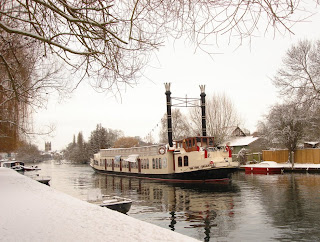 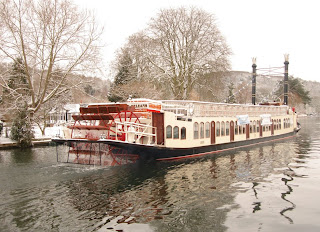 Nice reflections as the New Orleans slowly glides past us and up towards the lock.
For many years an Australian man called Alastair lived on his boat moored by this towpath. I used to regularly have a chat with him in the evenings as I rowed past in my little dinghy. His boat was called ‘Australian’s Possum’. Sadly Alastair died 3 years ago, and a wooden seat was erected here in his honour together with a photograph. Someone is looking after him, as recently a new photograph has replaced the faded old one. 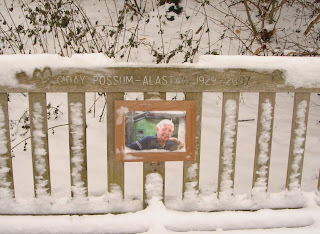 If you happen to slip in the snow and land up in the river, hopefully someone will throw you a lifebelt.
﻿ 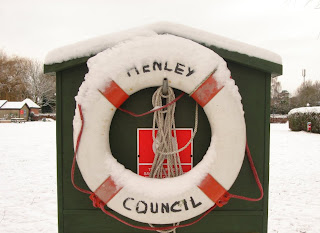 We’ve arrived in Henley. This little corner on the riverside leads into Friday Street. A number of years ago I very nearly bought ‘The Old Granary' – the second house along Friday Street. Although it had a beautiful garden, at the end of which was a big artist’s studio perched over a three-car garage, I found the house itself too dark. It hardly got any sun at all. (Anyway I couldn’t afford it, but it would have been interesting – a Mundy living on Friday Street).
﻿ 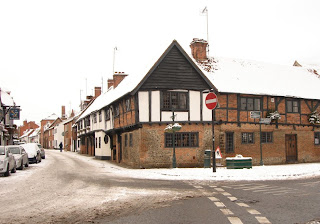 Finally we reached Falaise Square, right in the middle of Henley. All we have to do now is to shop at Waitrose and lug the heavy bags back home.
﻿ 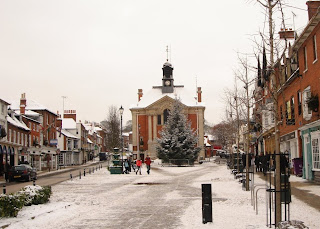 Yesterday my day started with breakfast with Paul Daniels and Debbie at their riverside home by the river where we exchanged Christmas presents. They are currently starring in Jack and the Beanstalk at the Harlequin Theatre in Redhill (till January 3rd), but manage to get home most nights – snow, ice and the M25 motorway permitting).
Then on to Marlow for a big family lunch hosted by my niece Louisa. Here’s a picture of her children – Max and Kate - next to the snowman they made earlier. We also watched a video of the school’s nativity play where Kate acted the coveted part of Mary. 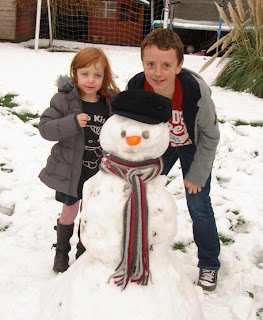 It’s now gone midnight on Christmas Eve. Most of my day has been spent travelling around delivering Christmas presents. (I even woke up this morning to find that Father Christmas had left a big stocking full of goodies draped over a chair during the night!)

Happy Christmas to all my friends, wherever you are.