I can’t believe how quickly the time is rushing by. Can it really be two weeks since I wrote my last blog? (Yes I’m still here, RG9, and by the way if you want to give me your address I’ll send you a ‘snowy’ Christmas card). But now we are in the run up to Christmas a lot of my time has been spent writing and addressing all my cards, and scanning and printing out Christmas cards for my talented neighbour, who, like me, paints his own cards. But my main activity has been total absorption in my latest painting. Here it is halfway completed. 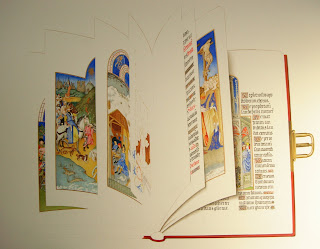 Quite a big painting it depicts an open book and hopefully, if I can work out the shadows successfully, it will become an interesting Trompe L’Oeil painting. The book will illustrate pages from “Les Très Riches Heures du Duc de Berry” These illuminated manuscripts were painted by the Limbourg brothers (Herman, Paul and John) between 1409 and 1412 when they became Jean de Berry’s miniaturists. A lovely example of the art of miniature painting before such people as Holbein and Hilliard took up painting portrait miniatures. I’ve introduced gold elements into the calligraphed lettering and some of the costumes of the figures (although you won’t be able to see it properly in the above). With a bit of luck I may finish it before the New Year. But right now I have to put it down for a while and concentrate on a miniature portrait for an American client.

I’m convinced the Post Office is taking some of us for a ride. I say this because the day after I arrived back home after my short holiday of the numerous bills awaiting me was one from my frame-maker. I duly sent him a cheque – in an ordinary envelope affixed with a second-class stamp. Not only did the letter take 2 weeks to arrive, (his shop is in Reading – just eight miles away from me) but the Post Office had the cheek to demand £1.32 compensation, with the excuse of ‘Insufficient Postage’. Now I know there is a size and weight regulation but the weight of the small letter together with the cheque were obviously way below both limits, so no way should an excess charge have been made. I was relating this story to a friend at lunch yesterday and she told me that she had to pay for so–called ‘Insufficient Postage’ for FIVE of her birthday cards last month. And then another guest told me that he also had to pay recently. Both of them said that none of the letters or cards were overweight or oversized. I just wonder how much the Post Office is making from what, to me, is a big scam.

This country has not been very good at handling the weather recently, what with airports closing and motorways becoming blocked for hours on end, not to mention the lack of gritting in many parts of the Kingdom. After all we could have learned a bit from last year’s snowfall. It’s still bitterly cold. On Thursday I braved the snow to visit my friend Felicity in the Berkshire Independent Hospital in Reading where she was recovering from an operation. Glad to say she looked the picture of health. Saturday morning I had breakfast with Rolf and Alwen. He showed me his latest paintings. My word, that man is prolific. Having spent the last few weeks completing a number of enormous paintings for the upcoming BBC Arena programme (to be shown on BBC2 on December 29th by the way) I was amazed how many more paintings are under way in his studio. One full-length painting of two small girls is enchanting, and I’m sure they and their parents will be absolutely delighted when they see the final work.

My young friend came with me to the Royal Berks Hospital on Saturday where I had my latest pelvic and chest scan. I won’t know the result till next Monday when I see the oncologist, but as I feel fine I’m crossing my fingers that all is OK. Lately as a small gesture to fitness I’ve spent a little time on my Wi-Fit. Although I haven’t noticed any weight reduction yet, I live in hope. And now with the approach to Christmas accelerating, my diary is getting filled with party dates, so no chance of losing weight in the near future I expect.