Having just returned from Singapore it was a real pleasure, last night, to attend the Henley Operatic and Dramatic Society’s production of the musical ‘RAFFLES OF SINGAPORE’ at the Kenton Theatre in Henley. 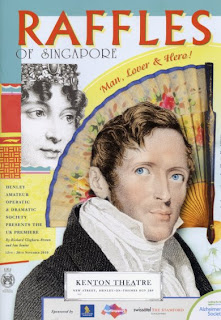 Although it was the last night the theatre was completely full – not an empty seat anywhere. My three lady friends and I had prime seats in the front row of the balcony. This production, a UK Premiere, was really well cast and I must say Michelle Wesson, playing Raffles’ wife Olivia, ‘bobbydazzled’ us all with her wonderful voice, and Alan Elston quite dominated the stage with his portrayal of Raffles himself.The first performance of the show, by the writers Richard Cleghorn-Brown and Ian Senior, was held at the Victoria Theatre in Singapore for a record two-week run.

Incidentally I’ve just finished reading the most fascinating book about Raffles and can highly recommend it. It’s called ‘In the Footsteps of Stamford Raffles’ by Nigel Barley. 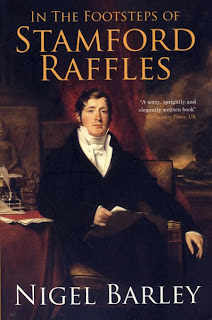 My journey home the other day was extremely comfortable on both Singapore Airlines and Eva Air, but I suppose I ought to confess to an embarrassing episode. Upon leaving Singapore I tentatively requested a lift on the baggage trolley upon arrival at Bangkok where I was due to make a change to EVA Air for the main portion of the journey. The reason being that one of my legs is a bit dodgy, and the distance of 1 km between the two airlines (especially with such a short time allowance for the transfer) necessitates a very brisk walk.
Not being used to the efficiency of Singapore Airlines, as I stepped out of the aircraft cabin I was surprised to see a smiling lilac-attired Thai stewardess holding up a placard with my name on it. She told me that she had been asked to provide a wheelchair for an ‘elderly gentleman’! (I don’t really think I qualify on either count). Next to her was a young man with the wheelchair. I hastily assured her that, only if it was available, I’d have appreciated a lift on the luggage trolley to take me to the EVA Air departure lounge. However I did appreciate her suggesting that she accompany me to the airline’s Evergreen Lounge at the far end of Bangkok’s enormous airport. However, so as not to appear a complete fraud, I put on a pronounced limp for the entire kilometre, but the effort of this deception absolutely tired me out by the time I reached my destination! (But as soon as the young lady disappeared I rushed back upstairs to buy a box of orchids, hoping that she wouldn’t witness my miraculous recovery). 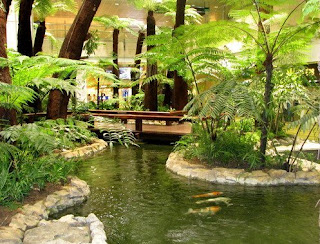 This photograph of part of the beautiful koi-carp filled miniature lake adds to the serene ambiance that is Singapore’s Airport. It is a real pleasure to spend time at both Singapore and Bangkok airports with their vast carpeted concourses and super-quiet efficiency. Contrast this with the dirty rubbish-strewn welcome I experienced at Terminal 3 Heathrow Airport when I arrive there on Tuesday evening. Scruffy, cold, and packed full of frustrated people, a few of us were given red ‘fast track’ cards.  Fast track indeed!  After standing for over half an hour in what was easily destined to be a three-hour queue, I’d moved forward no more than ten yards and couldn’t help but feel ashamed at the impression that first time overseas visitors are confronted with at Heathrow.  What a contrast to the queue-free ultra clean splendid airports I’d left behind a day earlier.


I’d always believed that people of religion had purer minds than the rest of us, and that Bishops in particular are required in the words of the Prayer Book to ‘set forward quietness, peace and love among all men’.  So I was disgusted to read that the Bishop of Willesdon, the self-styled ‘Bishop Pete’, likened Prince William and Kate Middleton to ‘shallow celebrities’. Does he know them? Has he met them? No of course not. And in his reference to the marriage of Prince Charles and Princess Diana he declared “I managed to avoid the last disaster in slow motion between Big Ears and the Porcelain Doll, and I hope to avoid this one too”. He may possess anti-Monarchy opinions spouted by Marxists, but to publicly express such spiteful, crass and unchristian views only demonstrates what a shallow and nasty little mind he has. When he was ordained into the Church of England didn’t Bishop ‘Pete’ Broadbent swear ‘true allegiance to Her Majesty, Queen Elizabeth II, her heirs and successors, according to law, so help me God’? So when he ordains priests how can he require them to swear allegiance to an institution he regards as ‘corrupt and sexist’?