Riverside lunch parties are always special to me - and last Monday was no exception. It was Olive Bond’s birthday (which she had kept a secret from the guests) and about 30 of us enjoyed a wonderfully jolly time – Here’ a photograph showing the view from one of the tables on the verandah. 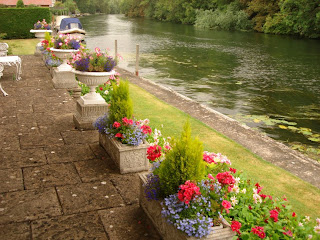 Olive’s husband, Gordon, made a delicious Pavlova – he’s an expert Pavlova maker – this time with added pieces of stem ginger. (Ginger is one of my staple and favourite foods). Paul was on our table and kept us laughing with his many stories and magic tricks. 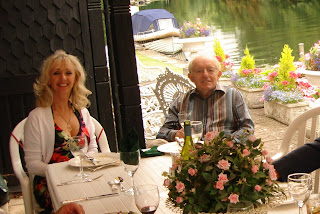 A couple of years ago a very talented Barbadian singer called Rosemary Phillips came to Henley and I was lucky enough to not only see her performance at the Henley Music Festival, but was invited to join her and my hosts at a very late supper party after the show. She agreed to pose me with the idea that sometime in the future I’d paint a miniature of her. That sometime was last week – and here’s the result. I think I’ll exhibit it in the January MASF Show in Florida. 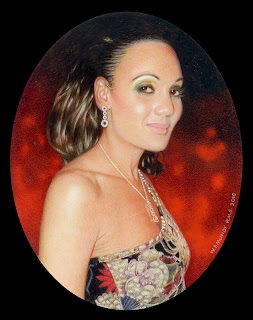 Waddesdon Manor in rural Buckinghamshire is an extravagantly turreted chateau now owned by the National Trust but originally created over a period of 24 years by Ferdinand de Rothschild who bought the land in 1874 from the Duke of Marlborough. 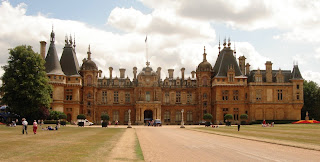 Last Wednesday a friend and I visited the manor, where we were warmly welcomed by a very dear friend, Suzy Barron, who is the Marketing Executive there. Many magnificent treasures are housed in Waddesdon - a superlative collection of English paintings hangs besides the finest French 18th-century examples of decorative arts, set in rooms clad in panelling from the grandest Parisian town houses. When I gazed at this painting by Thomas Gainsborough of Lady Sheffield it suddenly struck me that when I was a lowly apprentice some 50 years ago, I based the portrait I was asked to paint as the centrepiece of a porcelain-style biscuit tin on this particular painting. This, therefore, was my very first real miniature portrait. 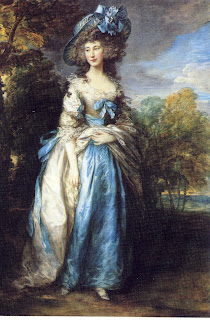 As we toured the manor we came across a number of pieces of contemporary art in a special display. My favourite amongst them was a spectacular huge chromium steel egg by the famous American artist Jeff Koons. He called the sculpture “Cracked Egg (Blue)” The mirror-like surface was quite dazzling. In one of the rooms this curved table laid out for a banquet would be the type of table where Louis XIV would sit – at the head, of course. 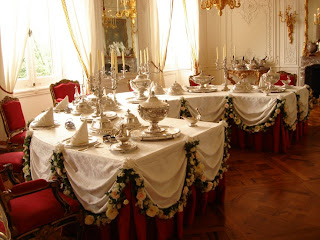 Other lengths of table could be added on both sides for less important people to sit, then even less important people further down would have to stand.
The gardens of Waddesdon Manor are beautifully laid out and impeccably maintained. (Apart from the resident gardeners I believe there are a willing band of volunteer helpers dedicated to keeping the gardens immaculate). 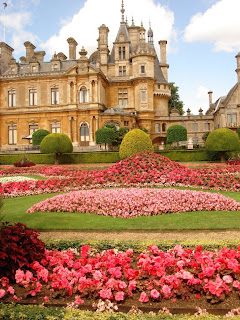 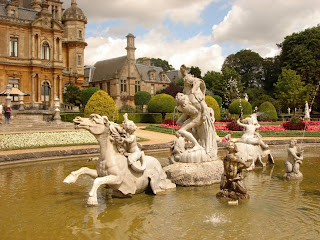 I’m a bit of a film addict, so it’s fortuitous that Henley has such a great little three-screen cinema complex. Over the past two weeks I’ve seen two animated films – both in 3D and needing Polaroid glasses. (I’d rather see them without 3D as the polarisation tends to dull the image too much for my liking – and as one of my eyes doesn’t work too well I can’t really appreciate the 3D effect anyway). Last week I saw Shrek 2 and this week Toy Story 3. Both were really good, but Toy Story3 was superlative – so real and evocative. I must admit a tear or two crept into my eyes towards the end of the film. I guess I’m just a big kid.

It’s nice to be back bowling once more. For the last two Monday evenings I’ve spent a very pleasant couple of hours being coached – yesterday I had one-to-one coaching with John and learned a lot (I think). However after two hours my arthritic hip took a bit of a battering, but the lovely weather on both evenings and the sounds of the river at the end of the green made me forget the pain for a while.

There’s the Henley Royal Regatta and then there’s the Town and Visitors Regatta. On Saturday it was the latter. Our lovely little local Regatta – well not so little as crews came from all over the country – played host to a perfect day. As I’m a subscriber we were able to wine and dine in the President’s tent. Very swish – I was the only male there not wearing a blazer - one man was in a glorious scarlet and white college blazer. (I must improve my sartorial image next year!) I said dine, it sounds posh but actually all we had was a hot dog, burger, and a banana!
Later in the morning I decided to test myself on the rowing machine prominently erected on the grass by the towpath. It seemed I’d recovered enough from my operation last year to exercise my stomach muscles, so I had a go.
The distance to row on the machine was 300 metres. For the first 200 I pulled really fast and hard- buoyed on by a few rowing types, but suddenly my strength seemed to ebb away and the last 100 metres took much longer than the others. My time was one minute eight seconds, which at least was faster than the fastest woman and the under sixteen’s. Wish there had been a veteran’s section. But here I am - straining hard. 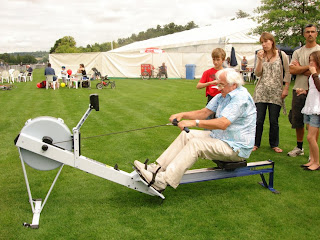 Incidentally I am often amazed to see who reads by blog, and where in the world they live. After all it’s only a diary of some of the things I get up to during the week. But a quick check on my stat counter the other day came up with this map showing where my readers live 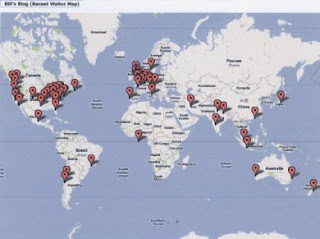