Yesterday evening a friend came over to watch England’s first match in the World Cup in South Africa. Having set ourselves up with cider, Kettle Chips and a flag for her to wave, we settled down to enjoy the game. At the stadium the sound of thousands of 127-decibel, 3 ft long vuvuzelas eerily resembling a million hornets was quite deafening, but my friend joined in competition by downloading a special app on to her iPod which emitted a hooter-like sound. So we were well-prepared. However just 3 minutes into the game the picture vanished, to be replaced by a Hyundai car advertisement! That would have normally been OK but the ad came on at the very moment when Steven Gerrard scored England’s sole goal! The mistake only happened on high definition TV sets apparently. (I won’t mention the goal that keeper Robert Green let in.)

Now is the time of boat shows and regattas, so last Saturday we visited the Beale Park Boat Show at Pangbourne in Berkshire. I almost swapped my 23 ft.Windy for a smaller boat whilst touring all the stands, but decided instead to have a brand new tonneau cover made for the Windy. I like boat shows – there is always so much to see and do. Here’s a couple of photos I took there. 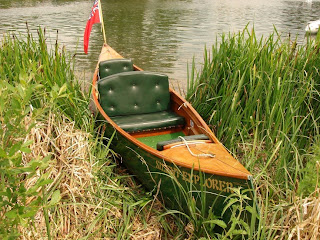 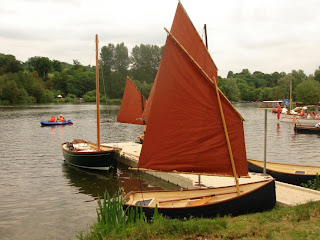 Talking of boats, Vince Hill’s sister and her family were staying with them at Sagamore last weekend so I was invited to lunch and a trip up river on their Electric boat. Vince put on his clipped English accent as we were going along – imitating a wartime Royal Navy captain giving orders to sink the enemy submarines. It was quite hilarious and I don’t know what the occupants of the little rowing boats and slipper launches thought as we went past with the children on board our boat joining in by acting as naval ratings. 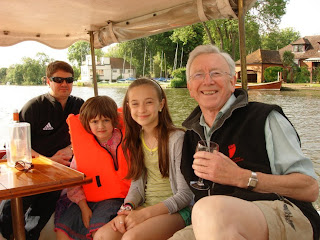 On Friday a new client came to visit and to be photographed for a miniature portrait. After chatting for a while we soon found out that we had both worked for the same International adverting company. What was most intriguing in that it was only two weeks ago that Murray Livingstone Smith came to visit me from New York. It transpired that Murray was my new client’s closest friend and colleague in days gone by. I painted Murray many years ago dressed in a Spanish Bullfighter’s costume – for what reason I can’t quite remember. 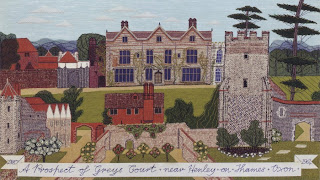 Greys Court in Henley dates from 1346, when the De Greys were granted ‘licence to crenellate’ (fortify) the building. The ‘Prospect of Greys Court’ – above - was designed and made by Lilian Dring in 1964 and happily hangs in the kitchen there. Greys Court is now owned by the National Trust. We paid a visit yesterday afternoon, spending the first hour or so in the beautiful gardens before touring the house itself. They even have a well-designed maze on the other side of the vegetable garden inspired by Dr Robert Runcie’s enthronement address as Archbishop of Canterbury in 1980 in which he spoke of ‘the mazelle muddle in which the world finds itself’. This very comfortable family home we see today was created by Sir Felix and Elizabeth, Lady Brunner, who bought the estate in 1937. They restored the house and rescued the garden from dereliction. 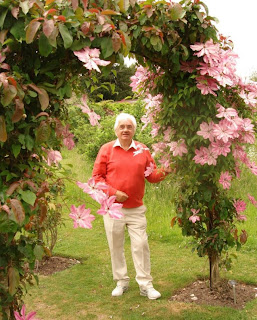 In the grounds behind the house stands the Well House. Built in 1586-7 this medieval well is 200 feet deep. Water was raised by a vertical tread-wheel, which was turned by a donkey. All the wooden mechanism is still in perfect condition. The only thing missing today (I’m glad to say) is the donkey. Apparently the donkey kept moving until it heard the clink of the bucket at the bottom of the well as it filled with water. This then became the signal to walk the other way and thus lift the bucket. 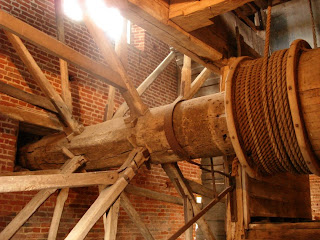 A number of years ago Lady Brunner asked me to paint a large oil portrait of herself and Sir Felix. Although Sir Felix was only able to see me for a short while, due to his illness, I managed to complete the painting from life with lady Brunner, but dressing up a friend in Sir Felix’s pullover and holding his walking stick. His face I painted from a tiny sepia photograph. Here is the painting as it appears in the official guide-book. 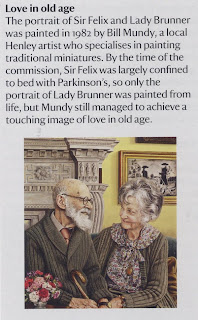 When I met Sir Felix, because of his fear of strangers at the time, I was given the choice of who I was to be presented as: The new butler, the gardener, or ‘the man from the National Trust’. I chose the latter knowing nothing about butlering and not too much about gardening. However there is a small PS regarding the painting. Lady Brunner told me one day that her son Hugo was told by the vicar of the small village of nearby Turville that when he marries young couples he always advises them to pay a visit to Greys Court where they will see a painting depicting love in old age, which they should aspire to. (The vicar never knew how the painting was arrived at.)