Making a Splash in Norfolk

It’s been a busy old time lately what with preparing for my exhibition at the Horizon Gallery in Henley and last weekend away in Norfolk. Originally we were intending to show about 20 large paintings and 19 miniatures – as it is quite a small gallery – but eventually found that we could hang 35 or so large pictures. (The walls of my flat are quite denuded now.) The first showing for invitees was on Tuesday evening and the next one will be on Saturday from 5 till 7 pm (make a note, RG9, if you are reading this, as you would be welcome to come along). The exhibition lasts until the 1st of June. 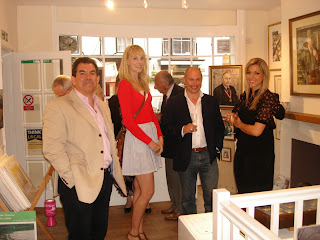 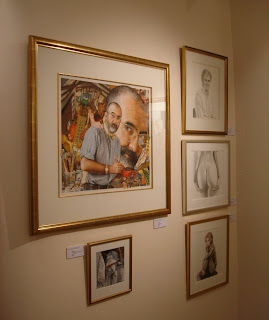 Last Monday my old friend Murray Livingstone Smith came to visit from New York. Murray used to be the International Managing Director for the US Advertising Agency I worked for way back in the sixties and seventies. He was instrumental in securing me a two-year ‘cushion’ with a nice salary when I resigned to start my career as a full-time artist. So for the first two years I carried on as Regional Director for Asia at the same time as I struggled to establish myself as a portrait painter and artist. We had a good lunch at Phyllis Court and then when Murray had a look around the garden we came across this bizarre sight in the river near my boat. 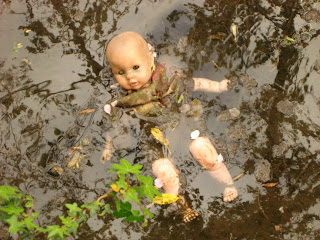 The strangest things come floating down the river – thank goodness this was only a doll.

On Friday I paid my annual visit to old friends Vic and Christine Granger in their tiny village in Norfolk. It’s always such a pleasure and we managed to cram in a variety of trips during the weekend. One of them was to spend half a day at Pensthorpe Country Park. There they have a tremendous variety of birdlife – in fact Pensthorpe is used as the setting for the popular TV programme Springwatch. I popped down the lane on Saturday to see old Joe – I don’t know why I call him ‘old’ Joe as he’s probably younger than me. I photographed him in a gamekeeper pose as a possible reference for a painting. Here he is 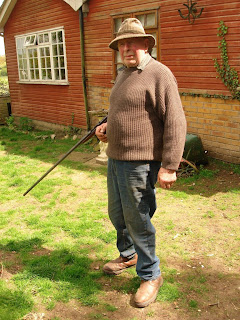 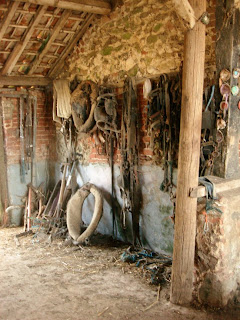 Joe has about six heavy horses and can be seen sitting on his plough behind three of them most days as he works them in his fields. He also paints – always horses and straight from life. His studio is populated by three very excitable Labrador dogs who charged at me like demons when they were let out. The two geese in the farmyard were the most vicious of the many animals and birds around the place and let out ungodly squawks as they closed in to attack me. Scary! Joe says that when they get too close he grabs them by their necks and swirls them around to calm them down. I didn’t try that method, but merely backed away – very gingerly.

We visited Gressenhall Farm and Workhouse. on Sunday. The workhouse was built in 1774 to accommodate the large numbers of people who were receiving Poor Law payments. Men, women and children were kept in different quarters with high walls separating them. Even brothers and sisters were kept apart. At one stage, when deceased workhouse inmates were required to be buried in their home parishes, rather than at Gressenhall, an enterprising Dereham undertaker adapted his Norton sidecar to transport the bodies back to their homes. 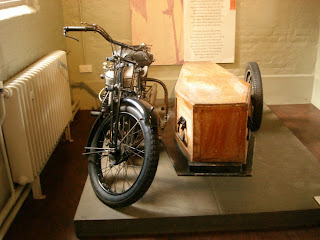 Vic and I had a nice morning bowling at his club. There we played on an indoor green, where I was pretty useless. Mainly because, and this is my excuse, an artificial surface is so much faster than on an outdoor green and the wood curls in at a much greater angle. (When I got home on Monday afternoon I played in the most glorious sunshine at my own club in glorious warm evening sunshine to the accompaniment of all the sounds of the river running past, and showed a marked improvement.)

During our travels around the countryside we came across this lovely little bridge straddling a small river. 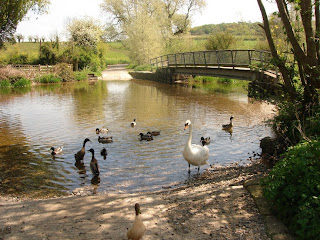 We took a few photographs of the swans to help with a painting Vic is doing and I watched as a car made its way across the ford. As it got close to me I realised I was about to be drenched by the spray so leapt back pretty smartish. That part of the little video that follows has been deleted. If it doesn't play, try this direct link to YouTube: http://www.youtube.com/watch?v=S2q9eVoBDqw&feature=player_embedded