Where are you Cinderella? 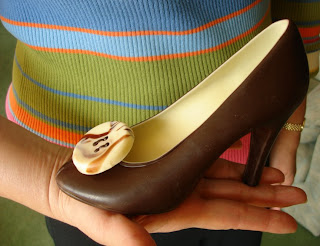 How are these two pictures connected? You may well ask. No, I’m not developing a foot-fetish. In fact both are made of chocolate. The chocolate shoe was a present from my friend Bluebells who visited Henley on Sunday afternoon. My dilemma now is where to start – heel or toe? Or maybe the chocolate button. Decisions! Decisions! As far as the Easter pack of chocolates is concerned I’ll relate a little story. Last week, when shopping at Waitrose, I bought the pack above (as I buy about twenty-five different eggs and other Easter goodies - mainly for the family- I stagger my purchases over a number of weeks). When I looked for it yesterday it had disappeared. Perhaps I’d left it my car boot? No. In the refrigerator? No. The only other possibility was that I’d left it in the trolley in the car-park. About four days later I called in to Waitrose, harbouring the extremely remote thought that someone had handed it in. They had! So thank you kind person, whoever you are. And thank you Waitrose for keeping it for all those days.

I completed the three-miniature portrait commission for the New York client on Friday and now look forward with great interest to see how the jeweller makes the fabulous Faberge styled frames within which they will be housed.
Also on Saturday I put the last touches to my first double miniature portrait. It’s of friends Fergus and Zelia – they live in the woodlands of deepest Devon. 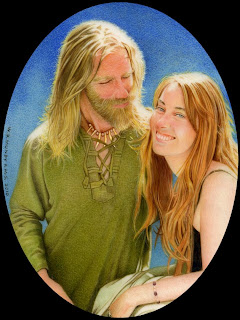 When I mentioned the other day that I gave an illustrated talk to the Remenham WI and all they offered was ‘electricity’, I was looking forward to giving a presentation on Tuesday morning to PROBUS (the professional businessmen’s organisation) as they had informed me that all I need bring was a CD as they were fully equipped with everything. I should have known better. I did take my laptop as a precaution, but soon after my arrival at the venue ( Badgemore Golf Club) I discovered they had no digital projector or sound system – pretty basic items for a 100 image presentation with a bit of video I would have thought. Luckily I own a digital projector, so the chairman whisked me back home to pick it up. My talk was entitled ‘A Brush With Life’ and basically was about my life in art. The 50-strong audience was delightful – the oldest man there was 92 and had been a bomber pilot during the war. In fact another five ex RAF pilots were there, all of whom had flown Spitfires. I really enjoyed the day – and they served a nice lunch afterwards. 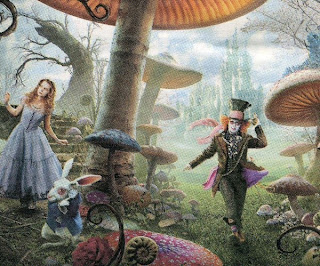 It was an Alice in Wonderland in 3D evening yesterday at the Regal cinema in Henley. I just loved the inventiveness of the costumes, and the way recognisable actors were morphed - or whatever technique was used - into characters such as the Red Queen (Helen Bonham Carter) and Tweedledee and Tweedledum (Matt Lucas). I guess I’m still a boy at heart - I even revel in Disney World – but although the screenplay wasn’t the greatest, the sets and sheer imagination won me over. I’m still not sure whether my defective eye allows me to experience the full 3D effect - perhaps I need to see it on Imax or a 180 degree big screen.