On Monday evening Leslie Thomas launched his new book “Almost Heaven” at a very auspicious location – Salisbury Cathedral.The two-hour drive down to Salisbury was horrendous with driving rain and dark grey skies the whole way. Amongst the guests were a smattering of war correspondents and photographers who I found fascinating to talk to about their experiences in the fighting zones of Asia, especially as we had several friends in common from those far off days. On the back cover of Leslie’s book is reproduced the miniature portrait I painted of him a few years ago.

After the launch I made my way round the darkened precinct of the cathedral to Leslie and Diana’s house in the close where dinner for a few of the their close friends was laid on. At least I intended to be there. Having ascertained where the house was I knocked on the front door and was invited in. What a posh do, I thought, seeing the champagne and beautifully dressed guests assembled there. I didn’t see Leslie or Diana but was introduced to Lady Cathcart, who it seems was hosting the dinner party. It soon became apparent that I’d come to the wrong house! The Thomas’s lived next door! Highly embarrassed I started to retreat, but the most charming Lady Cathcart asked if I’d like to stay and have a glass of champagne. I politely declined and found my way to the correct house. About thirty guests were there. We were served shepherd’s pie and meringues. As the launch coincided with Leslie’s 79th birthday I decided to give him the miniature in a leather and velvet case as a present - which he loved. The icing sugar on the cake depicted the cover of the book. Here’s a picture of Diana holding it – taken from my phone it’s not a brilliant photograph. 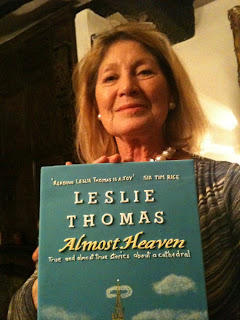 The other day I went to see the Van Gogh exhibition at the Royal Academy in London. 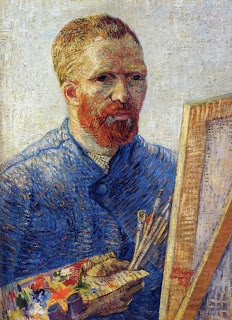 It was really fascinating as many of the letters he wrote to his brother Theo were on display, as well as the paintings. I particularly liked the sepia drawings, which he included in most of the letters. One letter written in English to an Australian friend of his showed what a great command of the English language he had and how passionately he felt about his work. My favourite gallery was the one in which were displayed about twenty or so portraits. His use of colour was masterful and I hadn’t realised till then how much use he made of a flat-ended pen in his work. While buying a few things in the RA shop I saw Yoko Ono, John Lennon’s widow, browsing there also, looking very smart in a white fedora hat.
Having a couple of hours to spare before catching the coach back to Henley I had a quick lunch, then ambled along to Waterstone's in Piccadilly where I could relax in one of the arm-chairs dotted around the place and read any of the books I liked. Then to round off the afternoon I indulged in a shoe-shine in Burlington Arcade. There’s nothing like sitting on the raised chair and watching the expert bringing your shoes to life.
Sunday evening was spent at the Mill at Sonning with Paul - my cousin, Jo his wife, and four of their grandchildren. The occasion was a two-hour show entitled ‘An Evening with Paul Daniels’. We had a really good time – except that Paul picked on me a few times – especially as we were sitting right in the middle of the front row. But then I expected that. Three of the children were chosen at various times during the show to help Paul with magic on the stage. He was intrigued by their names – Lorcan, Robyn and Hebe. All three performed really well – and Robyn proved to be a very talented little trouper. Although I’ve seen many of Paul’s acts and illusions on a number of occasions I’m still baffled. Especially by the guillotine which cuts a trio of carrots in half but keeps the hapless victim’s head intact!.
And finally, to show I really do work hard, here’s my latest miniature which I painted last week. It’s of a friend, Peter Sutherland, wearing his white bow tie. 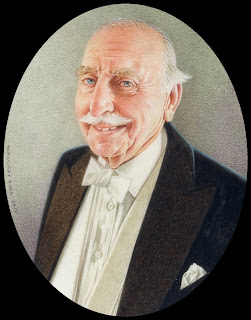