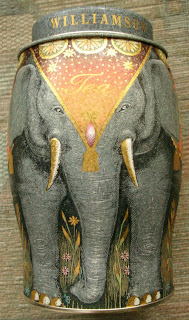 As a biscuit tin and tea caddy designer in my youth I was delighted to be given this lovely example of the art yesterday by my friend Joanne Dalston - it also contained fragrant Earl Grey tea. Val and I had driven over to Bampton in the Cotswolds to have lunch with Joanne. She’d spent six hours cooking a Jamie Oliver recipe for pork – and it was delicious. When I say Joanne lives in a cowshed, although true, once inside you’d never realise its origins as the whole ambiance is utterly charming. It’s so comfortable to spend the day with old friends.

And talking of old friends, Keith Lorenz – a colleague from those long gone days when I lived in Bangkok – emailed to say he was travelling in the north of Thailand and did I have Maurice Bowra’s email address, and as they hadn’t seen each other for nearly 30 years, if he managed to get down to Bangkok, he’d like to meet up with him. Maurice, my oldest friend, lives in Bangkok and we all worked together at Grant Advertising. We are so lucky to be living in the age of instant communication, as they did meet, and had a jolly evening together. Wish I’d been there. That same day Maurice emailed me a photo of the two of them at dinner. Here it is: 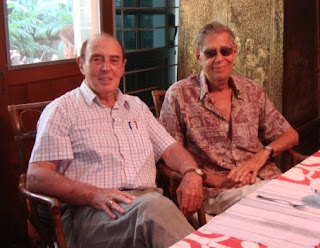 In the sixties I was the MD of a small American advertising agency in Bangkok – we were part of a worldwide International major company. Maurice dug out an old photograph of the agency as it was and this was also instantly relayed to both Keith (by now back in Hawaii) and me in England. Here’s the photo. Maurice is 4th from the left in the back row, I come next, then Keith. We’ve matured a bit since then, but like fine wines – as they say – improved with age! 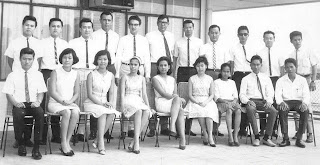 This afternoon I gave an hour-long illustrated presentation to the local Remenham Women’s Institute. In two halves, the first part traced the origins of miniature portrait painting from the late 16th Century, with descriptions of the techniques of the major artists, culminating in the 19th Century when photography was invented. The second half demonstrated my own techniques and included a few anecdotes surrounding some of the more prominent or eccentric characters I’ve painted over the years. I think it went well, and as the only facility the WI was able to offer was ‘electricity’. I supplied the digital projector, mike, sound-system, screen, laptop, etc. etc. and a few assorted miniatures. One of the ladies brought a couple of her family miniatures, and very nice they were too – possibly Englehearts.

I’m sure we in England are going quite potty when it comes to political correctness! Maybe there are other counties as loopy, but I could hardly believe it when I read the other day about a Jobcentre somewhere in the country which had banned an advert seeking “reliable and hardworking” staff. Can you believe it? They said it would discriminate against unreliable and lazy applicants! I should hope so too. Just imagine if this rule was applied to athletes aiming to take part in the Olympic Games. I can see the objections now - “You can’t say ‘fastest, fittest, strongest, dedicated, etc” as this will discriminate against the ‘unfit, slowest, weakest and lazy’.
Another little item caught my eye as well – a motorist was caught by the police blowing his nose whilst stuck in traffic. He was fined £60! For blowing his nose! And the car wasn’t moving. The mind boggles!

Now I’m getting geared up to start painting a trio of miniatures for a New York client. Can’t wait for the morning to come so I can get underway.