Lasting Reminder of a Legend

Next week I’ve entered a snooker-style ‘Colours’ tournament at Phyllis Court and as I’m a bit rusty at the moment (when was I not?) Jilly and I had a sneaky practice game yesterday evening. Neither of us will win, mind you, but we both needed the practice.

‘The Henley Standard’ – our local newspaper - did an article about one of my large watercolour paintings this week under the caption “Lasting reminder of a Legend”. It’s called ‘Vince Hill-this is your life’. Incidentally I usually include a little secret in my larger pictures, and if you click on this one you may be able to see the words ‘Vince Hill’ painted on the edge of his collar). Vince will be appearing at the Kenton Theatre in Henley on Wednesday December 9th in aid of the ’Kenton for Keeps’ campaign. It should be a great show. For tickets (£15) call the box office on 01491 575698. 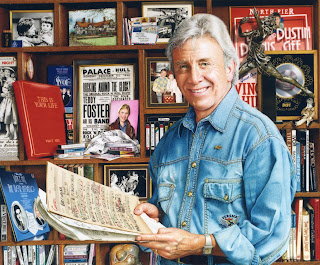 Talking of legends, my grandfather, Arthur Staniforth, was a minor legend in his time. Between the two World Wars, when he was living in Henley, managing the prestigious Royal Hotel, he felt so sorry for the scores of poor barefoot children in the area that he bought new shoes for them all. This was just one of his many philanthropic deeds. He also befriended hundreds of the young women widowed in the First World War and gave most of his money away. I used to visit him often on my leaves from the Far East in the sixties and I always remember one of his pieces of advice – “If you’ve got a three-penny bit, a pen-knife and a piece of string in your pocket you can look anyone in the eye!” Here’s racy picture of him (he’s on the top right) with my grandmother, and their four children – my mother seated on the left). 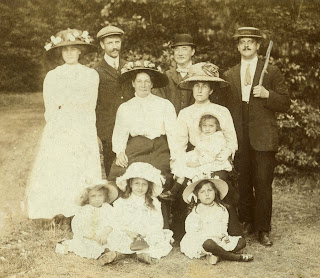 Apart from domestic things – like having a new tap installed in the kitchen (which overnight caused a dangerous amount of water to cascade down into the control cupboard in the hallway below!) – my week has consisted of 8 to 9 hour painting days. There were two highlights however. One, I was treated to a birthday dinner at my favourite Italian Restaurant on Tuesday evening by my young friend, and on Thursday went to an art exhibition and wine tasting at Fawley Hall – the magnificent home of Sir William McAlpine. Lady McAlpine’s daughter, Vicky, is a really good artist and her versatility shone out in her large oil portraits of cattle, incredible still-life paintings of apples, nectarines and other fruit. She also showed a number of delicate drawings on toned pastel paper of babies. For a part of the evening Vicky was carrying her five week-old baby in her arms. And what a little charmer she was! Passed around from person the person little Polly seemed to gurgle with delight. The other guests were interesting too – Alan’s bronze and resin full size sculpture of a stag welcomed us to the event at the main front door and I met Gray Jolliffe, the cartoonist who introduced ‘Wicked Willie’ to the world in a series of hilarious books published in the eighties. (I’d better not put an example of the cartoons on my blog or it might get censored!) The main room where the exhibition was held had an intriguing floor design – a very large and intricate map of the Oxfordshire area. Apparently it rolls up to reveal the indoor swimming-pool. One of my favourite artists is David Shepherd and I was delighted to see an original elephant painting of his hanging above the fireplace.

A couple of days a go I took this photograph from our back garden of a solitary swan glistening in a shimmering sunlit scene. 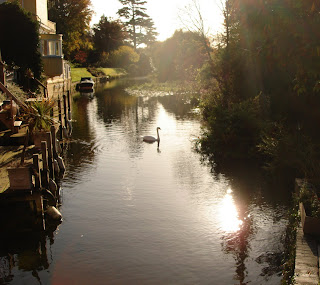 I totally agree with RG9‘s comment on my last blog. Yes Sir. Roll on the day when a Minister for Common Sense is appointed here in England.