On Wednesday I, together with a young friend, visited Bletchley Park, also known as Station X, in Buckinghamshire. 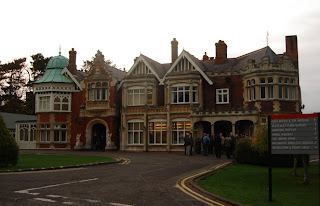 During World War Two Bletchley Park was England’s main decryption establishment. Ciphers and codes of the Axis countries were decrypted there – most importantly ciphers generated by the German Enigma machine.
The establishment and its activities were kept a complete secret till many years after the war, leading to Winston Churchill’s famous remark “The geese that laid the golden eggs but never cackled”. 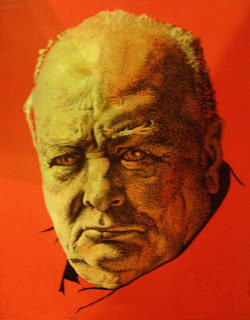 A striking picture of Churchill

My good friend Jack Darrah showed us around the amazing Churchill Rooms in Bletchley Park where many thousands of pieces of Churchill memorabilia are housed. I have always been a Churchill admirer, and a couple of years ago donated six miniature portraits I had painted of the great man to the museum but hadn’t realised that they are now housed in a special cabinet together with a number of my books – very flattering. 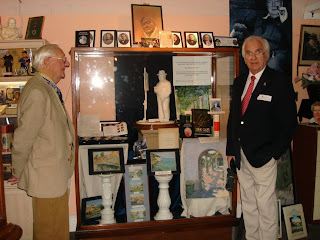 Jack Darrah and me in the Churchill Rooms

Bletchley Park was declassified as a wartime code-breaking establishment and its existence revealed to the general public in the mid 1970’s. It was finally decommissioned in 1987 after 50 years association with British Intelligence.
Bletchley Park is rightly described as the birthplace of the modern computer, and in one of the rooms we discovered this wonderful rendition – in slate – of Alan Turing, sculpted by the artist Stephen Kettle. 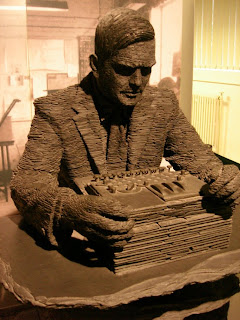 Alan Turing, together with Gordon Welchman, developed the ‘Bombe’ - a machine used to crack the Enigma codes. Recently a complete replica has been made and when in operation the spindles have drums fitted to them representing the three wheels of the Enigma machine. Colossus machines were electronic computing devices and were the world’s first programmable, digital, electronic computers. The encrypted messages were read at high speed from a paper tape, which goes round at a speed of about 30 mph! 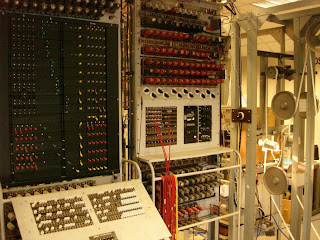 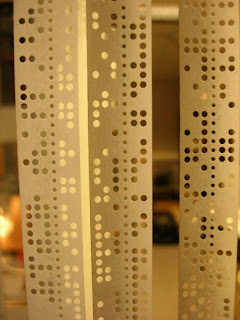 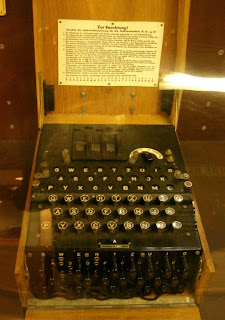 In another building there was a special section devoted to carrier pigeons. They were used extensively during the war to carry messages and were often dropped by parachute. This photo shows the type of parachute used by the pigeons. 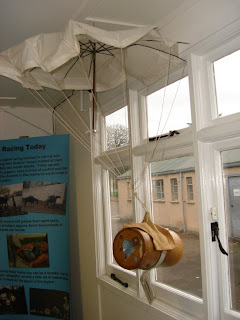 I thoroughly recommend a visit to Bletchley Park – there is so much to see and so much history of the code-breakers to learn.

My working week has almost exclusively been devoted to starting a large and very detailed painting of two friends of mine. Maybe I’ll show the progress at a later date, as the painting is bound to take at least two months to compete. For the past three days I’ve worked on it for 10 hours at a stretch.

Yesterday evening Jilly and I played skittles. The boat section of Phyllis Court had organised a dinner together with a skittles match at the Upper Thames Motor Yacht Club on Mill Island at Sonning. We had a good time there and didn’t disgrace ourselves as we both scored eight out of nine in two of our three games.

I’ve bought and wrapped nearly all of my Christmas presents – only about 12 to go – and all the Christmas cards are ready to post, so I can relax on that score and settle down to paint hard - in fact although I never usually paint on a Sunday I’m so excited about the painting I’m working on I think I’ll put in 4 or 5 hours now before I go to Val’s for dinner. 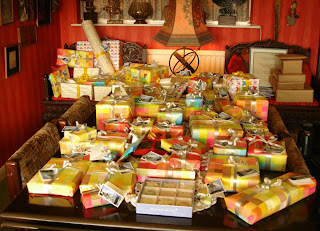 Christmas is a coming