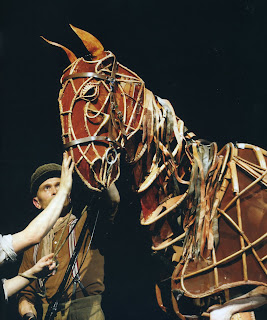 The highlight of my week was undoubtedly on Wednesday. Joanna had booked tickets for ‘War Horse’ at the New London Theatre in Drury Lane. Brian and Jane picked me up just after five pm. How we managed to get to Sarastro’s restauarant in London – which I’d booked for just one hour later – in time for a hurried meal, I’ll never know. But we did. (I call Jane “Last minute dot com” as she is invariably late, but she and Brian always seem to arrive in time somehow).
Sarastro’s is the most colourful restaurant in London in my opinion. You sit in little decorated golden gondolas and feel as if you are taking part in an amazing Venetian pageant.
I’d recommend ‘War Horse’ to anyone. It’s so different to anything else I’ve ever seen, and is set in Devon just before the First World War. It’s the story of the war as seen through the eyes of a horse. The visual part of the story is projected on to a huge 25 metre torn page as if ripped from a sketchbook. Sometimes you are looking at a Devon landscape, then a floating cloud, next a vast horizon, then eventually a battlefield – complete with loud and terrifying sounds of war. There’s no way I can describe the story or spectacle of the highly original staging. The young horse – Joey – and later the full-size horse, together with other horses, are made from wood and worked by men inside the structures. What was amazing was that after just a short while you only saw the horses – the men inside seemed to disappear. Every gesture, snort and movement was faithfully depicted. Maybe these pictures will give an inkling of their construction.
We had fantastic seats – right in the centre of the theatre - and being in the second row from the front in the dress circle, we had the most wonderful panoramic view of the whole show.
Wandering through Covent Garden after the show, as the evening was so balmy we stopped at a little outdoor café and drank cappuccinos till midnight. 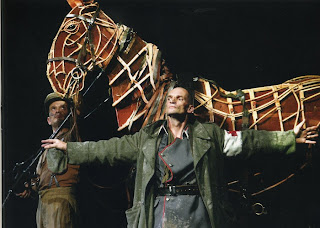 At last I’ve found the perfect surface for pencil drawings! It’s taken a lot of experimentation over the years. From Not Pressed to Hot Pressed, line and wash Saunders watercolour board to Daler-Rowney’s acid-free Smooth paper, etc, etc. But today, hooray, a couple of Schoellwershammer line and wash watercolour boards arrived. The surface is just right for my style of drawing and I’ve already started a large portrait, only reluctantly putting it down to write this blog.

Today is Saturday and Henley is in the middle of its Literary Festival. Now in its third year, there is so much to do. This morning Val and I boarded the ‘Hibernia’ a 75 foot riverboat – where we listened to poetry readings as we cruised up to Marsh Lock and then down to Hambleden before returning an hour later. Many of the poems were about the river and the four readers were all experts, one of them – Sally – is a famous Shakespearean actress (as well as being the daughter of the Everest conqueror, Sir John Hunt). 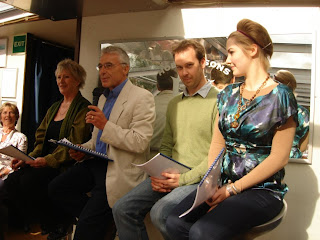 So much is happening this weekend. Last night we went to the Kenton Theatre to listen to a talk by Ben Fogle and James Cracknell. Oarsman James is an Olympic gold medallist and Ben has appeared on many television shows. A couple of years ago they rowed across the Atlantic (Ben had never rowed in his life before that), and recently they entered a race to the South Pole, only being narrowly beaten to their destination by a Norwegian army team. Talk about endurance – the trek (they walked all the way dragging their sledges behind them) took six weeks, in which time James Cracknel lost over 40 lbs. They do so much for charities. For example after the show last night, at about 10pm they were due to be picked up by car and driven through the night to Edinburgh. There they plan to be harnessed to a pair of rickshaws where they will walk for about 60 hours to London dragging the rickshaws behind them. What an amazing pair!

Felicity and I saw Jeremy Paxman – of TV fame – give a very interesting talk about Victorian painters (also at the Kenton) in the afternoon. I’m particularly fond of Victorian art and had already seen his TV series on the subject. My American readers may not know who Jeremy Paxman is, but apart from anchoring ‘Newsnight’ on the BBC he is in charge of ‘University Challenge’ on BBC 2. His abrasive and incisive style frightens most people. Tony Blair and Gordon Brown, for example, refused to be interviewed by him, I’m reliably told. So you can imagine how frustrated he became last night when the computer images of about 100 paintings didn’t work properly. The poor operator was at his wits end, and as the images kept popping up out of order Paxman became increasingly irritated. (If the computer man had been closer to him I’m sure he would have felt Paxy’s fist rather than just the verbal tongue-lashing and ire we experienced). Eventually the show progressed after a fashion. Luckily Jeremy Paxman is a good speaker and knew his subject well, so we really enjoyed the afternoon. This painting by J.W.Waterhouse is one of my favourites. 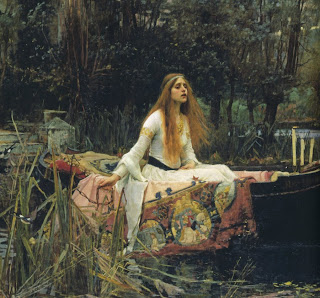 "The Lady of Shalott"

I’d better not write much more or cousin Paul will tell me that my blogs are becoming too long! However it has been a good week and although I got in over 40 hours painting I fear it might be wasted, as in rubbing out the pencil marks under a fine line of vermillion I’d just painted, somehow paint got on the rubber (‘eraser’ to my US friends) and made such a nasty mark on the painting that I don’t think I can save it. That’s the worst of watercolour – at least in the style I paint – you can’t make a mistake!

So briefly my week, apart from the above, went something like this - Felicity (who knows the layout of hospitals like the back of her hand) took me to the Royal Berks to have a chest x-ray on Tuesday, I took Josie and Tom Campbell to dinner at the Curry Leaf in Wargrave on Thursday, then later on to a swanky ‘after-show’ Literary party at the Hotel Du Vin. Went to lunch with Paul and Debbie, Bill and Dee at Phyllis Court on Monday and welcomed Molly for tea on Sunday after her arrival from New Zealand a few hours earlier. That woman has stamina!

To end with - here’s a photo I took last night from my studio window. 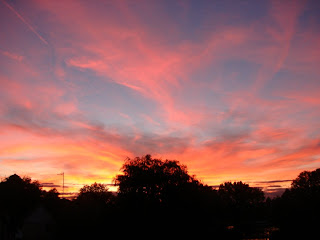