For the past 35 years I’ve made my own Christmas card out of one of my paintings. Too many people collect them, it seems, so it would be discourteous to stop now. This year I decided to paint a ‘Snow Queen’ picture based on one of the window displays I saw in Fortnum and Mason’s last Christmas, but after a week’s work abandoned it – for the time being anyway. I trawled through my old files, pulled out half a dozen possibilities, then discarded that idea. I tried to make a card out of ‘The Stationmaster’ but that didn’t work either. So now I’m a couple of days into a new snow scene depicting a view from the towpath looking towards the river. I’ll vignette the edges when I finish it. Here’s the progress so far: 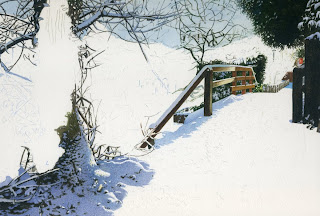 An artist friend of mine, Denise, came to stay for a few days this week. She has just been elected to become a full member of The Royal Society of Miniaturists and wanted to go to the private view of the RMS on Monday. I quickly popped into the surgery to have my wound dressed before we caught the train from Shiplake to London. Trains are mobile phone territory these days. Why do people think they have to shout when talking on them? On the tube from Ealing Broadway to South Kensington a guy was talking very loudly in some sort of curly language – I think it was Tamil – all the way. He talked non-stop. If anyone was on the other end they didn’t seem to have much to say, as he seemed not to even pause for breath. The only relief – after the 7th stop – was when a young woman got on with a wailing baby. It ‘out-noised’ the garrulous gent. We got off just as the competition was hotting up! 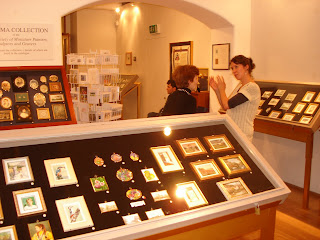 One of the cabinets at the RMS Exhibition
The miniature show this year was excellent – very high quality. It was good to meet so many friends there. The exhibition is held in about 5 rooms in the Mall Galleries. Perfect for miniatures, but because of the crowds, a bit hot on that day.

I shouldn’t talk about food, I’m told, but this week I certainly sampled a variety of cuisines. On Sunday evening Val cooked a wonderful English meal with a honey-based chicken, vegetables from her garden, and five different puddings. Monday, after getting back to Henley we had a Chinese meal at the Chef Peking. Tuesday we went to the Curry Leaf in Wargrave with some friends, and on Wednesday had a lovely time with Paul and Debbie at the Villa Marina. It’s Italian of course, and when they have halibut, give it a try – Its marvellous. Also it’s one of the few to escape from ‘Elf ‘n Safety’ as it serves dessert on a sweet trolley.
I had an interesting package from Charles Fleischmann in Cincinnati this morning. Charles is the most important collector of miniatures in the USA (and has a marvellous collection of portrait miniatures dating right back to the 17th Century, I believe). He’d sent me a 30-page copy of a booklet by an American artist called Ethel Frances Mundy. Born in 1876, her biography records details of her ancestral home in England - Markeaton Hall in Derbyshire. “ This seat of Francis Mundy Esq, has been in the possession of the family of Mundy from the early period of Henry VIII and records a long list of distinguished Mundys, beginning with Sir John Mundy, Knight, the Lord Mayor of London in the year 1522”. Although I can’t claim kinship ( I come from a long line of publicans, carpenters, farm labourers and blacksmiths) we do have something in common. Ethel was a miniaturist – and a very good one. Her speciality was wax portraits, having studied sculpture at the School of Fine Arts at Fontainebleau. She became very famous and her sitters included J.P.Morgan and the Rockerfeller family. Ethel also made a beautiful wax portrait of our Queen when she was Princess Elizabeth. I wish I could show you examples of her work but the black and white illustrations I have will in no way reproduce successfully here. Nice to have a famous namesake – even if she is no relation.

You might be interested in a miniature portrait I was commissioned to paint a couple of months ago. As it’s now been presented to the sitter – Group Captain Gerry Bunn CBE, I’m able to show it on my blog. I must admit I really like painting medals, uniforms and all sorts of paraphernalia. 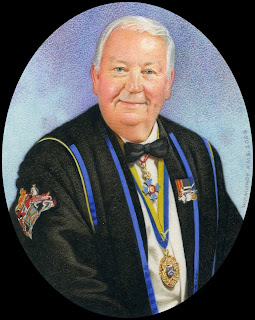 It’s Saturday afternoon and I’ve just got back from a visit to Katie Boyle in Hampstead. She’s looking good - although still a bit slow on her feet. Margherita, her glamorous sister, had just arrived from Geneva for the weekend, nursing a bruised eye and chin - she’d tripped over yesterday and fallen flat on her face. The last part of the drive home was enlivened by autumn tints in the woods bordering the roads near Henley 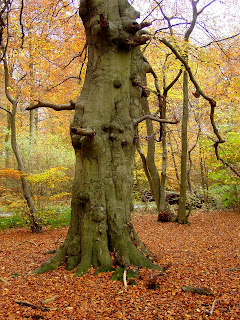