Yesterday afternoon I was driven to Reading by my lovely friend Felicity to see one of the country’s leading oncologists. Good news. His first words were “I will not be recommending chemotherapy.” As you can imagine that really pleased me. Apparently I’m very fit and mending rapidly. He told me that the surgeon had removed 17 lymph glands when he took out the growth and repaired the colon. “Seventeen!” I riposted. “That sounds an awful lot. Have I got any left?” In fact he told me that I still have another 2000, so that’s a relief. I’ll only need blood tests and scans every 6 months for three years. In the evening we went out to the Curry Leaf restaurant in Wargrave to celebrate. Had I been given chemotherapy the oncologist told me that one of the symptoms of the treatment was a numbness and twitching of the fingers – not a good thing for a miniature painter!
So that’s that - I’ll no longer bore you with medical matters! 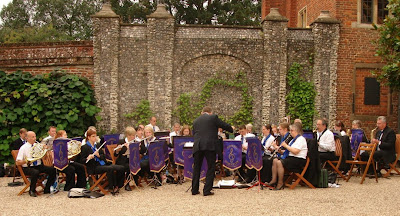 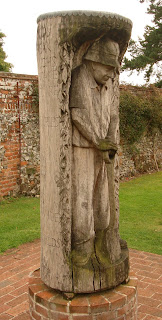 It’s been quite a hectic week – last Sunday I went to my favourite little fete at Greys Court. The weather was perfect. Tired as I was I won the golf. Not a real match of course – the object was to putt with 8 balls towards strings stretched across the grass at different widths. The smallest was just the size of a golf ball. I scored 52. The Mayor of Henley was there and asked if I’d help judge the children’s art competition. That was fun. I usually have a go on the rowing machine (veterans class) but was advised by the surgeon not to damage my stomach yet. So I’ll have to wait till next year to get a medal. The Goring and Streatley Concert Band entertained us throughout the afternoon. Whenever I go to Greys Court I make a point of visiting the life-size wooden carving of the old gardener in the fruit garden. If only he could see what a wonderful memorial it is.
The famous artist and my good friend Donald Hamilton Fraser RA died last week and I went to his funeral on Tuesday. Remenham Village Church was packed – he was such a nice man – a true gentleman. I’ve been asked to write a piece about him for our Parish magazine. His use of vibrant colours in all his paintings was distinctive and his knowledge of ballet vast. His book on dance contained the most beautiful free flowing drawings and silk-screen pictures. 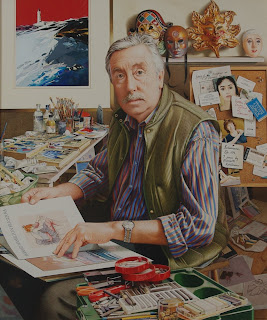 My aged tumble dryer finally gave up the ghost a couple of weeks ago. Over he past few years I’d had to coax it into action by giving the drum a series of vigorous pushes every time I used it. But I can’t grumble as its lasted 31 years! Searching the web I finally ordered a new one from Currys. Delivered last Monday, as soon as I switched it on it emitted the most horrible metallic groaning noise. By then, of course, the delivery-men had gone. So I spent the best part of a couple of hours that afternoon on the telephone – and more time the following day – trying to get a replacement sent out. I can’t stand the expensive and time-consuming rigmarole of being given a choice of numbers for various options to then find that none of them are what I want. My neighbour Chris came in as I was waiting on the phone and gave me the best suggestion of the year. “Most Companies or Organisations have free telephone numbers, so don’t waste money hanging on to the phone while they delay answering.” He then gave me the magic code. Just type SAYNOTO0870.com and then either the company name or the telephone number they gave you. You’ll then find the free number. It worked for me and I got straight through to Currys. The new tumble dryer arrived yesterday morning. And it works well.

Saturday dawned bright and sunny. I picked up Val and we made our way to the annual Henley Show. I’m a member of the Agricultural Association so I’d organised a car parking space by Ring Two. She had made a nice picnic. The sun blazed down all day – we both got suntans. 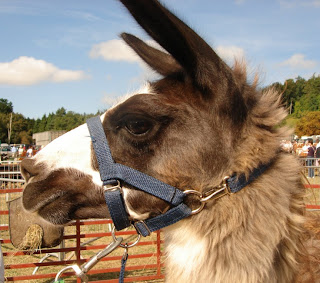 One of the Alpaca's at the Show

There’s so much to see at the show – from baby Llamas, to a great variety of cattle, horses, tractors, traditional coaches (one being pulled along by six miniature black horses), dog shows, ferret racing, Punch and Judy show, falconry displays, flowers and produce, crafts of every description, etc. And in all four rings there is activity throughout the day. Tim and the children joined us later and I treated Ellie and Charlotte to the 80-foot high bungee-jump and trampoline. They are experts on the trampoline and have one in their garden. 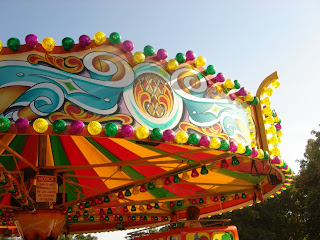 All the Fun of the Fair 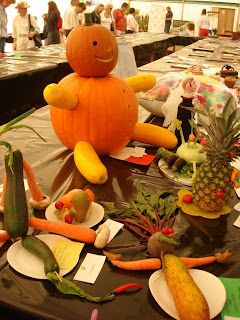 In the Produce Tent

Now that I’m back to painting I’m doing about 8 or 9 hours a day and have nearly finished the Station Master picture. It’s taking me a bit longer than it should because I stupidly have realised that I’m painting it on the back of the watercolour board! When I started the paining it was impossible to tell which side was the prepared side and which was the back, and it was only when I got into the very fine detail in the face that I realised the paint was not flowing as it should have done. In the past the back of watercolour board was a definite colour – now it’s as white as the front – and there is no indication as to which is which.

Our local theatre – the Kenton – is 200 years old and is the 4th oldest theatre in England. We all love it and I go there often. But it needs money to keep it going. On Sunday they organised a sumptuous luncheon at the magnificent home of Alan and Carol Pontin just across the river. Expecting about 150 people (it was, after all, £75 a head) they were delighted to finally end up with 280 guests. Members of the Henley Operatic Society dressed up in colourful costumes and wandered around the gardens. A male group of semi-ancient hippies (they won’t like my description!) called the Yukons played on their ukuleles some lively ditties, and another group called ‘Lend me a Tenor’ (now that’s a good name) sang some great original songs. I took little videos on my new Flip video camera but, as yet, don’t know how to transfer them to my blog. About twenty amazing classic cars were parked on a grassy corner (one of the auction prizes was a day a month for one year driving any of the cars - but not the Maserati!) Biggins did the auction and Vince Hill sang a very clever grace at the start of the lunch to the tune of Edelweiss. Paul Daniels wittily hosted the ‘hands on head or hands on bottoms’ game. A lot of money must have been raised that day as some of the auction prizes went for up to £20,000. My two friends picked me up on the way to the lunch and we sat on the same table together with Vince and Annie and a pair of very attractive women who successfully bid for items such as a complete firework display. I gave a framed print of ‘SwanUppers at Marsh Lock’ for the silent auction which went for, I think, £741. 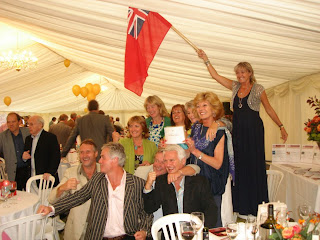 Alan Turing – the famous code-breaker of World War Two - was stationed at Bletchley Park and was responsible for deciphering the German Enigma machine, which shortened the war by, it is estimated, about two years. He also built abstract models of today’s computers and is credited with the invention of the computer. After his prosecution in the fifties he became so depressed that he eventually committed suicide, by taking a bite out of a cyanide-laced apple. The reason I mention this is that I heard just this week that the Apple Mac Computer’s logo (an apple with a bite taken out of it) reflects this event and so honours Alan Turing. I hope it’s true.