Nearly Back to Normal

It’s all coming together at last. One of our lovely district nurses still comes every day to dress my ‘wound’, but the way it’s mending I expect to be whole in a couple of weeks. (The doctor says it will be two months!) Just to be able to fully immerse myself in a hot bath once again will be bliss! Also I’m painting between 7 and 8 hours a day. Today is also the day when I can once more drive my car. Friends have been wonderful in driving me to hospitals, restaurants, shops, etc. but, being the sort of person I am, relying on other people seems such an imposition.

Last Sunday was another gorgeous day so I decided to have a walk along the riverbank. Although I’m told to rest as much as I can, it’s alien to me to lounge around. So I managed an hour's leisurley walk. The river at Henley is a lovely place for visitors. During my walk I passed several fisherman eyes fixed on their bright red floats bobbing around on the water as boats went by, no doubt frightening the fish and annoying the fishermen. 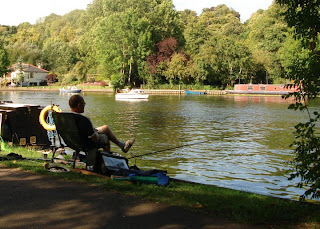 A Peaceful Sunday Afternoon
There were families dotted along the meadows enjoying the afternoon with their picnics and barbecues spread out around them. Courting couples, people in wheelchairs, children with little nets hoping to net a few gudgeon or sticklebacks if their parents let them near enough to the water, cyclists whooshing along the towpath without ringing their bells, and dogs of every description - having a great time making new friends and no doubt increasing the population of hybrid animals - given the slightest chance. Along this stretch of the riverbank are a few dozen wooden benches donated by people who love the river. (I intend to have one made, when -or if - I pass on. It will have an inscription saying something about my love of the river and this particular stretch of the riverbank).
When I returned from my walk I stopped at the lock to have a chat with Nigel the lock keeper, and watched the boats going in and out while Tracey made me a nice cup of tea. 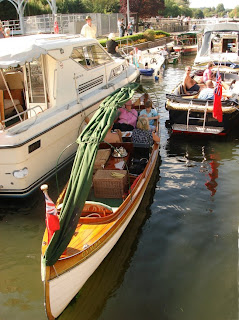 Boats in the Lock
You may have heard of the famous Leander Club in Henley. It’s the home of many of our rowing Olympic medal winners. Last Tuesday Olive and Gordon Bond took me there for a fabulous lunch. Gordon was recovering from his third hip operation. ( No he doesn’t have 3 legs – this operation was to correct a previous one which was giving him a lot of pain) . The view from Leander’s restaurant probably gives the very best view of the regatta course as you can see from this photograph I took from our table. 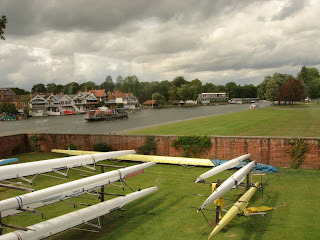 It’s been great to get out more after my enforced incarceration, and especially nice to welcome Heather (Rosa) Catchpole on Monday as I was taking her out to lunch at Phyllis Court. Heather drove up from Somerset and is the Past President of the Hilliard Society of Miniaturists. I’m sure she won’t mind me relating the story of why I call her ‘Rosa’. Many years ago when I first met her I said she reminded me of one of the girls from a James Bond movie. Preening herself coquettishly she ventured to ask which of the Bond girls I meant. When I told her it was Rosa Klebb from the film ‘From Russia With Love’ Heather kicked me on the shins! (Rosa Klebb was the boss of SMERSH and defected to SPECTRE. She also had a spring-loaded blade hidden in the sole of her shoe). Heather and I have been great friends ever since and she very rarely kicks me now.

Jilly and I played in a ‘Colours ‘ match last Thursday eveening at Phyllis Court. It’s a game played on the Snooker table using just the coloured balls. Twelve of us played in two teams of six. The object of the game is to score 9 in eight minutes playing against one opponent at a time. The rules are too complicated to describe here, but suffice it to say we had a very enjoyable evening. Neither of us won the trophy, and as it was my first real outing for a while, I was a bit tired by the time I got home.
Keith and I went to the Bowling Club the other day – first time for a couple of months. I’m not able to lift anything heavy at the moment so could only watch, but nice to be welcomed by so many smiling faces. 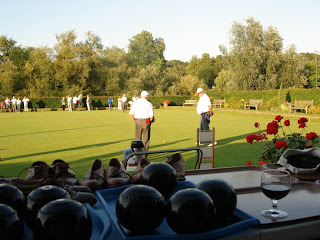 My friend Joanna who lives in Vienna is visiting England for a couple of months right now – she’s staying in Datchet - close to Windsor and Heathrow Airport. She finds the noise of the aircraft passing so low overhead every few minutes a bit difficult to get used to. (Reminds me of the American tourist who remarked that he couldn’t understand why the Queen of England had Windsor Castle built so close to the airport!). Joanna came over to Henley the other day for dinner but what with her left-hand drive car, pouring rain, the Windsor Horse Show, and congestion, she got hopelessly lost. It should have been a 25-minute drive, but over 2 hours after she set out I had a frantic call from a very distressed Joanna who had ended up on the far side of Reading. She eventually arrived – it took me about an hour to de-stress her, but the evening ended happily with Brian and Jane at the Orangery in Phyllis Court. I still couldn’t drive so she followed as we drove to the start of the M4 motorway in Maidenhead - to make sure she got home safely.
The following is a photograph of 8 days work on my latest painting. The background is of an old-fashioned railway station owned by Sir Robert McAlpine (I went there for breakfast last New Year’s Day) and the foreground will show a portrait of a local moustachioed Station Master I know. Probably it will take me another 3 or 4 weeks to complete it. But it’s wonderful to be back painting again. 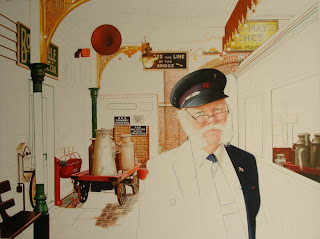 First stage of 'The Station Master'