I’m back to blogging – with assumedly no more interruptions for operations, CT scans, ultrasound tests, hospitals and other intrusions into my life!
Finally I’m back home – thank goodness - about 20 pounds lighter (welcome, but not the best way I’d recommend anyone lose weight!) 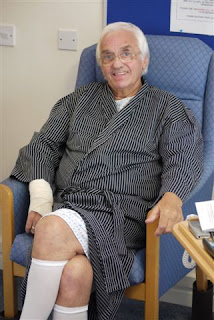 The invalid in hospital
It’ll be about 6 months before I’m back to normal, as right now I’m pretty weak. Hopefully I’ll be able to start painting again in the next few days, although even a couple of hours at my desk yesterday proved to be very tiring!.
Friends have been wonderful – I must have received over 70 get well cards – as well as lovely gifts of flowers and numerous phone calls, several from overseas. 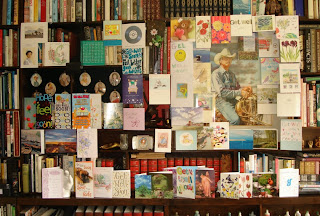 A plethora of 'get well' cards
The week I spent with Val was great. She looked after me so well and fed me with such nice food – most of the vegetables from her garden. I’m not allowed to lift anything and must take great care of my ‘wound’. The District Nurse comes every day to dress it. Sharran and Mike North drove up for the day from Somerset for lunch on Thursday. Mike is probably the world’s expert on Olive Oil and Olive leaf extract. (He appeared on BBC’s Dragons Den last year and knows so much about healthy living that his advice will almost certainly change my entire diet in the future.) Sharran is quite a character – and such a kind soul. Here’s a photo I took of her standing next to her (much to Mike’s embarrassment) highly colourful car. 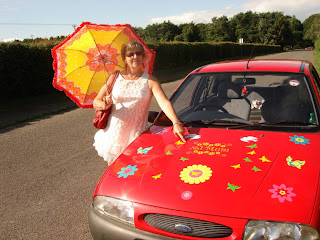 Wasps are my sworn enemy and as quite a few came in to Val’s sun-lounge (where I spent most of my days) she became the executioner! At the weekend she took me to the Herb Garden nearby but after about half-an-hour I became quite exhausted! As I’m usually so full of energy and stamina, this is an alien slow-motion world I’m living in at present. They keep telling me what do I expect? It was a major operation! But when I look at my flabby arms and thighs I realise how much I’ve lost.
Unfortunately I started having violent pains in my chest at night, which worried Val to such a degree that we finally got the doctor over. Fearful that I might have developed a pulmonary embolism because of the forced inactivity in hospital I was whisked off to the Royal Berkshire NHS Hospital in Reading.
Straight to the CDU Ward (Clinical Decision Unit) where I was subjected to every sort of test available. I thought I'd be there just for the day, but it developed into four. This time in a six-man ward. All were older than me. Two of them talked loudly to each other from across the room from early in the morning till about 10.30 at night! I won’t bore you any more about life in that room except to mention the unearthly and piercing screams that periodically (from about 5 in the morning) came from the women’s ward next to ours. It was a bit like Bedlam.
Anyway I finally was allowed home last Thursday evening. Pat and Averil were visiting when the doctor gave me the good news so Pat kindly drove me home to Henley. I’d been started on Walferin for a couple of days but the results showed a shadow and ‘crackling’ on the lung so it was stopped and now I’m only on antibiotics.
Although I’m not supposed to tire myself how could I possibly not go to Annie Coury’s ‘firework’ party last Saturday evening? Each year at this time Wargrave and Shiplake hold the most delightful 2-day Regatta. Great fun on the water with punt races, ‘dongling’ and all sorts of other river sports. The weekend became an oasis of the most wonderful weather. I wasn’t able to see the actual regatta, but Annie’s party heralded the culmination of the event. Felicity picked me up and about thirty of us stood (I sat) around on the lawns on that balmy evening sipping champagne, or in my case Brandy Ginger Ale (first drink for a month). We watched a great variety of boats glide past on their way to the Regatta site just round the bend in the river. As we ate a delicious dinner upstairs we had a grandstand view of the lavish firework display which started about 10 pm. It was the best ever. I took a few photos but they weren’t that good. 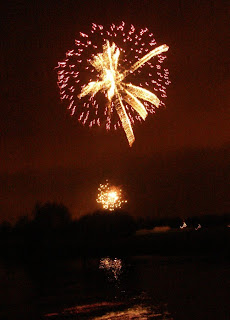 Sunday was another lovely day. Debbie and Paul so very kindly asked me to join them for lunch and a trip on the river. There was nothing I’d have rather done that day. Donna (Debbie’s sister) and her family were there too, so at about 2pm I gingerly slithered into ‘The Lovely Debbie McGee’ - taking care not to pull the stitches out of my stomach. We then silently and gracefully glided upstream towards Shiplake. As Donna is hosting a small boating party tomorrow at Windsor and will be expected to handle the bow rope at locks, it was a good opportunity for her to learn how to do it. We successfully passed through Shiplake Lock and ventured a few miles upriver passing several little islands bathed in the afternoon sunshine, before returning home at about 5. Just to laze back on the cushions was so utterly relaxing. 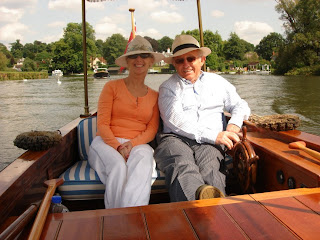 Debbie and Paul on the sunny Sunday afternoon 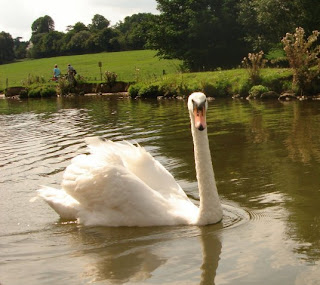 Gliding along on the Thames
Thank you again everyone who has sent me messages either via my blog or with cards, letters and phone calls. It means a lot.