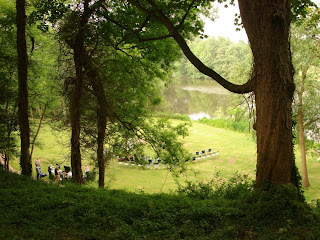 Sorry to disappoint you – I’m not going to write about a passionate encounter on the riverbank. No - this morning’s affair was the annual general meeting of the Hennerton Backwater Association. As always the sun shone brightly and the weather was warm. This year’s venue was Ivy Cottage and as you can see from the photograph the approach was quite steep. All sorts of lovely boats soon turned up – canoes, electric canoes, punts and slipper launches - and they were all wooden and traditional. About 50 people arrived, including Paul and Debbie. Simon was busy on the barbecue serving us up with sausage, bacon, baps, rolls, tea and coffee at about 9.30. I wrote earlier this year about one of my trips down the backwater made so much easier by the valiant efforts of some of the members last autumn when they pollarded a number of the overhanging trees and did a bit of ‘slashing and burning’. We all agreed how fortunate we were to live in such beautiful surroundings. 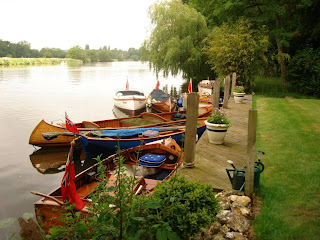 They came by canoe, dinghy and launch
Vince and Annie Hill celebrated their Golden Wedding anniversary last Saturday by hosting a glorious hog roast at Sagamore. – their riverside house in Shiplake. Shame it rained, but that didn’t matter – 130 guests really enjoyed the day and the spread was delicious. 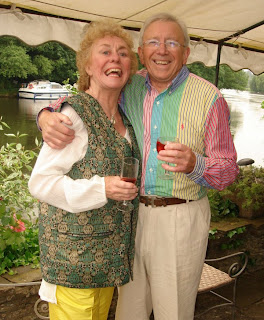 Vince and Annie on their 50th Anniversary 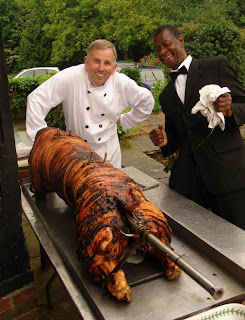 I admit to having two big helpings of Pavlova. So many old friends were at the party – even Bryony and Ian were there. Ian told me that of the 140 novels left in manuscript form by his mother Barbara Cartland when she died, so far he has published 57 - one every month. She was such a prolific and popular author that the books are selling like hot cakes. Don’t you think the hog looks a bit like a tiger? It took seven hours to cook - roasting on a spit in the garden.
Talking of large animals, my sister-in-law Val wondered who had left such big paw marks all over her vegetable patch the other day. Next day a large black panther was sighted at the end of her lane and duly reported in the Henley Standard. It’s still prowling around somewhere!
Back in 1963 I entered a pan-Malaysian open competition to design three large murals for the soon to be opened Paya Lebar airport in Singapore. It so happened that I won two of the prizes (with enough prize money to enable me to buy a brand new TR4 sports car!). The murals were made of Italian Glass Mosaic and stretched about 30 ft wide in dominating positions in the concourse. Although Singapore has its new Changi airport these days the murals are still in position at Paya Lebar. Why I mention this is that a few days ago I was emailed by someone at the Nanyang University in Singapore who is writing about a famous Singapore author and poet, Arthur Yap. Apparently one of his poems describes one of my murals in glowing terms. Here’s the mural – it depicts the Singapore skyline at night in the early ‘60’s. The city has certainly changed dramatically since then.

Together with Felicity and Fenwick, I toured about 15 gardens in Binfield Heath as the village was having an open gardens day. It’s amazing what some people can achieve with just a tiny space for a garden, although some of the larger gardens were quite spectacular. Later we boarded the electric boat (Margot) and took a cruise up the River Loddon where it enters the Thames just below Shiplake lock. As the engine of their boat is almost soundless we could glide along the river in utter peace enjoying the tranquillity of the scene and listening to all the sounds of the river. I made a little video, which I’ll add to this blog. (It has to be at the end as I don’t know how to insert it where I’d like it to be.)

This really amused me – it’s on a poster advertising the Dorset Knob Throwing Festival. These are some of the events they are planning:

I’ll leave you with that thought. The mind boggles!