Cruising Down the River (again)

You’d think my life is one whirlwind round of pleasure. I do have my moments however and because we’ve been basking in virtual tropical sunshine (plus humidity) this last week I’ve spent as much time as I can on the river. On Sunday my friends the Sutherland’s held their annual ‘Strawberry Tea’ in the grounds of their beautiful Queen Anne House ‘Bird Place ‘ which borders the Thames right by Henley Bridge. Another scorching day. Pity I felt so ill (The previous day I’d rowed about 5 miles up stream and had become totally dehydrated which didn’t help) but it was a lovely afternoon. One of the highlights was to be taken along the Regatta course on one of the umpire launches by Tony Hobbs. The launch we went on is 97 years old. Canada Geese have really taken over the Thames, but I have noticed recently that a lot more Egyptian geese are giving them competition. My picture shows a few of the Canadian variety we encountered as we glided past Temple Island. 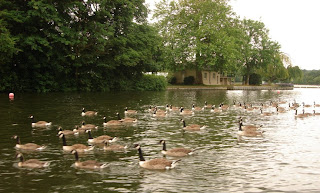 The geese are everywhere
On Thursday I took my big boat out for the afternoon. Tom and Sue came along as did Val – who made us a splendid picnic. We found an idyllic moorinpg space alongside Shiplake Lock where we could idly watch the boats go past as we enjoyed our prawns, smoked salmon, asparagus, new potatoes and baby carrots freshly dug up that morning from Val’s garden.

Tomorrow is the first day of The Henley Royal Regatta so the town will be overrun by visitors and seven-foot tall oarsmen and women. I’ll be going a couple of times so perhaps my next blog will be a bit more interesting than this one.

The Henley Bowling club is ideally located right next to the river (as I’ve mentioned before) but it is so nice to be surrounded by all sorts of other activities as we play. I’ll include a little picture of the green I took the other day. 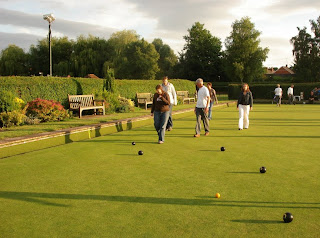 On Tuesday Paul Daniels and Debbie invited me to join them on their electric canoe ‘The Lovely Debbie McGee’ for a cruise along the river. It’s so relaxing to be lying back on comfortable cushions with the river rushing by and, best of all, with no sound of the engine to interrupt the utter peace and tranquillity of the afternoon. The following day I’d been photographing Joceline (we artists need to draw models from time to time to keep our skills up) so she joined us for dinner at my favourite Italian restaurant in the evening. Paul amazed her with a few close up magic tricks. And I must say although I’ve seen many of them before I’m darned if I know how he does them. (I have a good idea about the disappearing coin trick. however!)
Paul, Joceline and Debbie

Children say the most wonderful things at times. When my great nieces Ellie and Charlotte went to the seaside for the first time I asked them if they’d had a swim in the big sea. “Yes we did,” they said “ but we only went in the shallow end!”.

I’ll add a little video I made on Tuesday from my vantage point sprawled on Paul and Debbie’s boat.