The pair of swans who’ve made their nest at the bottom of our garden have now produced ten eggs. I’ve been trying to persuade the pen to lift up and show me her eggs for some time so I can make a little video, but she won’t cooperate. And as for the cob – he just hisses at me if I get too near the nest. Nevertheless I’ll keep on trying. When he shook himself the other day one of his little feathers wafted my way. I’ll post it here. Pretty, isn’t it? 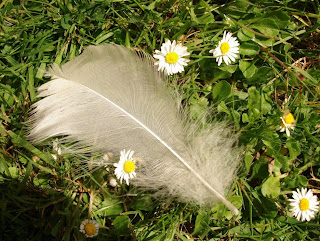 The weather’s been great lately – the best spring I can remember. At the beginning of the week I took my little dinghy out for a row down to Wharfe Lane in Henley, only stopping for an ice cream by Mill Meadows. And on Tuesday afternoon Sue and Tom came out for a trip on my big boat - Marsh Mundy - the first of the season. After about ten minutes the petrol fumes from the engine didn’t seem to disappear as expected. As the boat had only just been recommissioned I assumed that maybe the fumes were normal. But just in case I rang Ivan (the boatman) on my mobile phone to check. His reply went something like this “Get to the nearest riverbank as quickly as you can and get off the boat before it explodes!” Slightly chilling, don’t you think? As I’d just gone under Henley Bridge I rapidly steered the boat towards the Phyllis Court moorings. Ivan was with us within about ten minutes and checked the engine compartment thoroughly. All seemed OK and we were mightily relieved. “It must be exhaust fumes,” he said. So we went on our way upstream and moored on the sunny side of the river near Temple Island where Sue and Tom sipped champagne and I had a ginger beer and munched mango-flavoured crisps. Sue reckoned that as I still had old petrol in the boat – left over from last year – it may have been responsible for the excessive fumes. Being a gardener, she knew that old petrol in lawnmowers can cause a smell. 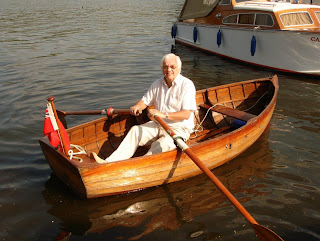 Thursday was an active day. In the morning Vince and I played tennis at the Shiplake Tennis Club. It was our first game this year – we only played for about an hour with a score of 6/5 – in Vince’s favour. He said he needed the practice as he hopes to play a few games on the Mediterranean cruise he and Annie are going on this morning. Later in the afternoon I was invited to play snooker with the President of the PC Snooker Section at his house. We played for nearly three hours – it’s surprising how far you walk in three hours round a billiard table - with the result that I was slightly knackered in the evening.

Yesterday I received a letter from the President of the Hilliard Society of Miniaturists informing me that I’d won the prestigious ‘Bell Award’ for the best portrait in their annual exhibition. The subject of my portrait was Leslie Thomas – the author of ‘The Virgin Soldiers’. Leslie has written over 35 books since then, but that novel has a special significance for me because it was set in Singapore and based on his experiences as a National Serviceman there. I was also ‘a virgin soldier’ and spent over a year in Singapore during my National Service days. In the background of my miniature I’ve painted the names of all his books. I’ll be attending the Hilliard Exhibition in Wells next month so will pick up the award then. 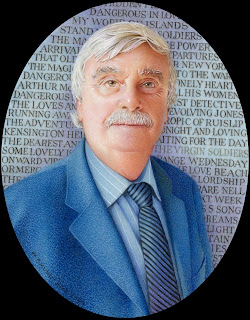 In the glorious sunshine of a perfect evening yesterday Jilly drove me the fifty miles or so to Basingstoke where we had booked to see Paul Daniels perform in the Central Studio at St Mary’s College. The venue was quite special – small, smart and intimate – even with extra chairs brought in because the show was a sell-out, the audience totalled only about a hundred and fifty people. Paul loves this sort of venue as he can really connect with his audience. Jilly’s two young grandchildren joined us for the show, as they lived close by. Of course Paul spotted us sitting near the front, so made funny comments about ‘the posh Henley visitors.’ He also gave me a plug and even announced my website address! Never misses s trick, does Paul. I’ve seen many of his magic shows – and watched him perform from as close as a couple of feet away, but still haven’t the faintest idea how he does his magic! Last night Debbie wheeled a large modern guillotine on to the stage and a ‘willing’ young man bravely put his neck on to the transparent Perspex semi-circle. Tightly fixing the other half in place – and inserting three carrots in strategically placed holes in the Perspex, Paul slotted a great big 2-foot hunk of metal into the top of the apparatus. Then whoosh! Down came the big blade slicing in half the three carrots surrounding the hapless young man’s head, but miraculously leaving his head on his shoulders. How was it done? I’ve no idea – it’s magic.

When I was a soldier in Singapore the Ghurkha Regiment was based on the island of Blackangmati (now renamed Sentosa). I visited the island often and met many of these wonderful people. Fearless in battle they have served loyally in the British Army for generations. Since World War I as many as 50,000 Ghurkhas have died fighting for Britain and 150,00 have suffered serious injury. They receive a much smaller pension than their comrades in other regiments and many are now living in poverty in Nepal. Just yesterday our Government announced that unless Ghurkhas who served in the British Army prior to 1997 fulfil certain requirements they will not be allowed to settle in this country. We allow hundreds of thousands of illegal immigrants, plus countless asylum seekers, many of whom are bogus, to live here. We even admit self-styled enemies of Britain to come here - and give them full benefits. But the Ghurkhas have to fulfil almost impossible criteria, which includes the ruling that they must have served for at least 20 years in the British Army (an impossible attainment as only officers can serve for that length of time – ordinary soldiers are only allowed to serve a for a maximum of 15 years). Another requirement is that they must have won one of the top four medals for gallantry - aand that includes the Victoria Cross. Mentioned in Despatches doesn’t count. How mean is this? Our MP’s are greedily pocketing exorbitant annual expenses on top of their salaries, yet they’d deny these brave and loyal soldiers the right to settle here in Britain. Even though the High Court has ruled that the Government's refusal to give Ghurkhas who retired before 1997 the right to live in Britain was discriminatory and illegal, the Government blatantly ignored the law. What a disgraceful betrayal.

I took this little video the other day from my boat. It shows one of our pair of swans having time off from the nest but I still can’t get either of them to show me the eggs.