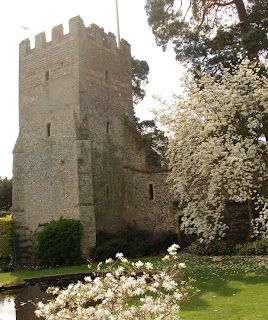 Greys Court in Henley is a Tudor Manor with 14th Century fortifications. It opened its gardens to the public this week, so after picking up Gisel in Reigate and lunching at the Orangery in Phyllis Court, we spent a very pleasant time wandering around the gardens at Greys Court.
She was intrigued with the 16th Century Donkey Wheel there. In days gone by (and right up to1914) a fully grown donkey walked on a giant 19ft diameter wooden wheel (similar, but much larger of course, to those you sometimes see in hamster cages) which brought up water in a bucket on a rope from the 200ft well below. We wandered around the maze in the gardens, had tea outside, as the weather was perfect once again, and stopped to admire the wonderful full-size carving of the old gardener at the end of the fruit and vegetable garden. 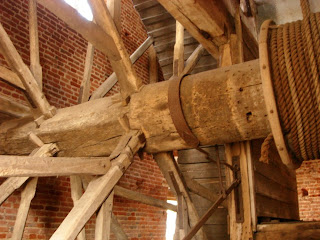 Part of the Donkey Wheel 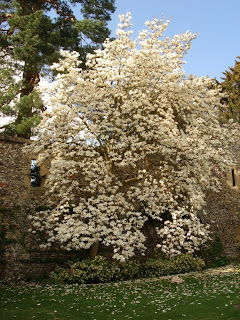 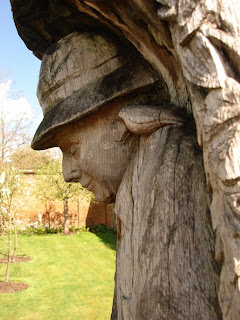 Later in the day a car arrived to take Gisel to Heathrow Airport where she was catching a plane to take her back to Australia.
It was ‘Handing-in Day’ for the Summer Exhibition at the Royal Academy in London last Monday. I submitted a large portrait of ‘Shining Bear’ – Rolf Harris’s didgeridoo player, and a miniature of Peter Sutherland.
Health and Safety regulations seemed to have reached the RA this year, as I had to join a long queue of disgruntled artists in a scruffy alleyway off the Burlington Gardens leading down to the bowels of the Academy. The young stewards seemed to have no idea of what to do as we were called forward one by one to progress a few yards to the next stage. After over half an hour of this, a few of us decided to buck the system and find our own way to the place where we knew the bar codes were being swiped and where we could unwrap our paintings. Emerging once more into the daylight and offering sympathetic glances to the long line of artists which by now had reached way back into Saville Row, I turned into Burlington Arcade stopping for a very efficient shoe shine there. A nice coffee and a read in Waterstones in Piccadilly and I was ready to look for a bus to take me to Paddington Station and home.
When I row down the river in the evenings in my little dinghy ‘Marsh Midget’ I often stop to talk to friends who are either on their boats or just sitting in their gardens. One of my favourite people was Alastair – a jolly Australian who kept his boat ‘Australian’s Possum’ moored beside Mill Meadows all summer. Sadly he died eighteen months ago. So I was pleased to see he’s been commemorated by a photo and carving on one of the many wooden seats that are dotted along the towpath there. 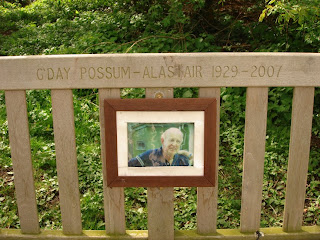 A comment on my blog recently suggested (with tongue firmly in cheek I suspect) that all the lunches and dinners I may mention are always in wonderful surroundings, and are all marvellous and delicious. Perhaps it’s because I only talk about the nice times. There are many exceptions. On Saturday, for example, a couple of friends were visiting and I had booked lunch at the Bull in Wargrave – a neighbouring village. When we arrived imagine our surprise to see a notice outside the pub reading “Kitchen Closed”. It seemed the chef had been mugged the night before in Reading and was in hospital! So we walked across the road to another pub – The Greyhound where I had just about the worst meal I can remember. We were the only people there and our lunch took nearly an hour and a half to arrive. Burnt up scampi, tasteless peas and soggy chips. What a treat! Not!

Contrast that with Good Friday. Annie and John Coury had invited about twelve friends to a very lavish affair at their house by the river in Wargrave. Annie’s table decorations at Easter are amazing – little chicks and coloured eggs pop up everywhere, and silver trees dangled with tiny mirrors and a myriad of Easter goodies. She’s a great cook and her fish pie was heavenly. A very happy occasion – I knew everyone there. Sitting next to me was Pip Williamson. He has been a vet all his life, and for the past couple of years since his retirement has been commissioned to be present in a professional capacity on TV programmes when animals and birds are being used. All to do with ensuring no cruelty takes place, or that the creatures are not subjected to stress. But I was amused when he told me that recently he was on set for nearly 6 hours while they filmed a commercial using three butterflies!

My big boat is nicely cleaned now. Or at least the outside is. I spent about 5 hours scrubbing it last Sunday, so apart from sprucing up the cabin, it’s ready to take out. My licence certificate arrived the other day so I’ll be able to go through locks as soon as the weather warms up.

Yesterday was a family day. At about eleven in the morning Neil and his family arrived from Waterlooville. As Becky is now eighteen it’s time to paint her eighteenth miniature – I paint one every year – so I had my big camera set up to take a few dozen photographs. We’ll then choose the best one for me to work from.
All four sets of nephews and nieces came to Henley yesterday and at about 12.30 we tootled off to The White Hart at Binfield Heath. We go there every Easter Sunday. This year it had changed hands and is now run by a Dutch couple. As there were 19 of us we had booked the conservatory at the pub where we all managed to just fit in. Somehow we seemed to be bigger this year, but I suppose all the children had grown somewhat. Interesting menu. I had smoked duck with whole cooked pear and fresh vegetables. We only had a main course as we all went back to Val’s house for pudding. She had made over a dozen different ones. Then came the Easter egg hunt and ‘the money game’ in the garden. When I lived abroad and came home on leave each year I collected all my coins and lined my nephews and niece up then threw the money all over the garden so they could run and find the coins. Now they are all grown up and have children of their own I do the same thing each Easter Sunday. This year I’d saved a couple of hundred 2, 5, 10 and 20 pence coins. I have nine great nieces and nephews ranging from two to eighteen.. I took a little video of it yesterday. Hope it comes out.