That Was The Week That Was

It’s been both a prolific and social week. I changed the background on Timmy Mallett’s miniature as the jungly green leaves background was too dominant, and detracted from his face. I also finished the painting of lovely little Juliana. This was a commission from a client in New York. I’d already painted the same little girl at the age of two. Her mother was so pleased with the result that she wanted to have another one done of Juliana as a 7-month baby. 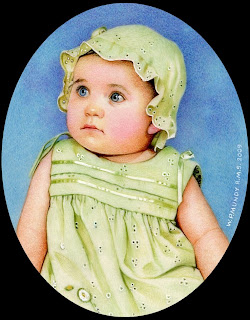 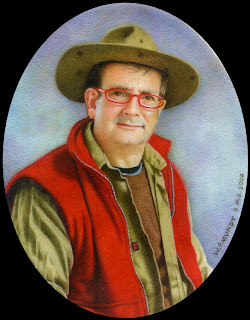 Timmy Mallett in Jungle Gear
Felicity and Fenwick joined me on Tuesday evening to see the film ‘Young Victoria’ The costumes were lavish, as were the settings, but to my mind the characters were either too pretty, pretty, or wrong. For example Lord Grenville – the Prime Minister when Victoria became Queen was shown in the film as a relatively young and handsome man, when in fact although he was a real charmer, by all accounts he was in his mid-fifties. But it was the abrupt ending which I thought silly. Even though the film was about the young Victoria, the 15 or so years up until Albert’s death were telescoped into just a few minutes, with a history lesson given to the audience by way of a series of captions. It was as if the producers had run out of money half way through filming and just packed up there and then.

Jilly rang on Wednesday to see whether we could have a game of snooker that evening at Phyllis Court. Both of us are getting better. This time she brought a copy of the rules, which she’d found on the web. Good idea, as last time we played we were a bit hazy about some of the values of the colours. Snooker is a lot to do with geometry and working out the correct angles, and we both played quite a few really good shots. We can only get better.
The Mill at Sonning is currently showing ‘A Sentimental Journey’. It’s about the life of Doris Day. Sally Hughes, one of the owners of the Mill, is a talented director, singer and actress. She played the part of Doris Day superbly. (In fact she was so good that I’m going again next week with some other friends!). Sally must be very careful to preserve her voice as she’s on stage all the time and as well as making many changes of costume she sings twenty-seven songs!
I’ve talked about the Mill at Sonning before – it’s even mentioned in the Domesday Book of 1086. When the mill closed it was one of the last flourmills on the Thames driven by wheels. It couldn’t compete with the larger mills and when one of its major customers, Huntley and Palmers (my old employers) stopped making biscuits in Reading it finally closed in 1969. However Tim and Eileen Richards, Sally’s parents, bought the derelict building in 1977 and converted it into the intimate dinner theatre it is today. The whole place – and some of the surrounding houses - is now powered by water and in the cocktail lounge you can see the gigantic wheel slowly revolving behind a warm coloured glass window.
If it wasn’t so stupid I’d find the latest victim of our draconian ‘Elf and Safety’ laws, hilarious. Last week the London Fields Lido in Hackney was closed. Why? Because of a brief burst of rain! All the swimmers using the pool were told to wait until the shower stopped before getting back into the pool. The closures are ‘to protect swimmers safety’. They say that the lifeguards can’t see the pool properly when it rains! Why? Are they employing partly sighted lifeguards?
We are becoming overwhelmed with silly regulations and totally unnecessary expenses. York Council, for example, recently fitted sat-nav systems to its dustcarts in an attempt to keep track of them. Did it work? We’ll never know, as they were all stolen the following week! But not to be outdone, York Council has just forked out £6,000 to equip its fleet of lawnmowers with satellite navigation. They won’t get lost mowing York’s football pitches now, will they?