My advice? Avoid Miami airport whenever you can. After a very early morning start in Barbados I boarded an American Airlines plane, enroute to Miami. I suppose I must be spoiled by Far Eastern airlines service because AA’s was totally impersonal, even sullen, the cabin announcements so fast and mechanical that I could hardly understand a word, and although it was a 3 hour flight the only food offered was “we have a few cheese sandwiches left at 4 dollars a go”. She said something else but I couldn’t decipher what it was – but didn’t care anyway. Arriving at Miami the queue at the immigration took nearly two hours - at the end of which I was fingerprinted and my eye was photographed. Thank goodness my connection to Tampa was due in about four hours! When I finally retrieved my big case (with its new special lock on the strap to comply with the latest US regulations) I was told the plane I was due to fly to Tampa on had been cancelled and the bar-coded tag on the case wouldn’t get me there. So after a lot of computer clicking my case was retagged and I was told to “take it over to that pile of bags and leave it there.” From what I could see all the other bags were going somewhere other than Tampa, but I was past caring by now.

Then I did a really stupid thing. Leaving Barbados too early for breakfast, and having had nothing to eat on the plane, I decided to get a meal at one of the airport restaurants. Making myself understood (just about everyone speaks Spanish there - and I thought this was America) I ordered a hamburger from the bar. After waiting for over twenty minutes it finally came, but for the first time in my life I forgot to pick up my hand luggage and made my way further into the restaurant to find a table. It must have been about ten minutes later that I realised something was missing – my case with everything in it – passport, tickets, paintings, money - the lot! Panicking like mad I rushed back to the food counter and unbelievably the case was still there on the floor! I guess I was lucky.

Paul had been telling me the night before to stay calm on what I knew was not going to be one of the happiest days of my life. Miami airport has got to be one of the most complicated airports to find your way around (and I’ve been to hundreds) but I finally located the right gate, and waited. We boarded the plane, and I settled down in the tiny little seat. How the fat man on the opposite aisle fitted into his I don’t know as he seemed to spill over by about ten inches on each side. Then all went quiet and finally the Captain announced that the machine that pushes he aircraft away from the stand wasn’t working. So we waited 15 minutes for another one. That didn’t work either! But finally, nearly an hour later, we moved. Hurray! The flight to Tampa took nearly an hour – not even soft drinks or water were served this time. So when we landed and the Chief Stewardess asked us all to clap our hands to show our appreciation of ‘Gladys’, ‘Mary’, and the other wench, I firmly sat on my hands.
But magically my big case arrived – albeit a bit late – and I hired a taxi to take me directly to the Dunedin Fine Art Center where The Miniature Art Society was holding the artists reception, prior to its 34th Annual Exhibition the following day. I think the taxi driver ripped me off, but I was glad to be amongst friends again. Later, a dozen or so of us went out for dinner and I finally booked into my hotel – The Yacht Harbour Inn. 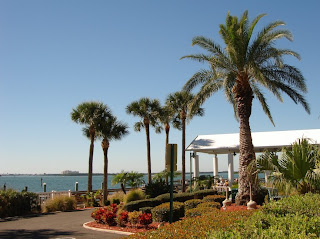 It’s now Sunday and the weather is brilliant - Florida at its best. The MASF puts on the most elaborate awards show of all the miniature societies in the world, I think. It started with a lavish ‘Brunch’ at the Bon Apetite restaurant. My very good friends Wes and Rachelle Siegrist (wonderful artists and fellow bloggers) were there, as were Kay and Mike Petryszak, who I’ve known for nearly twenty years. (Kay is the President of the Miniature Artists of America). Rachelle, being a reader of my blog, wanted to know all about the famous chocolates that ‘Bluebells’ gave me at Christmas, and why hadn’t I brought one for her! 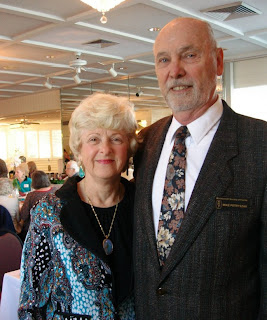 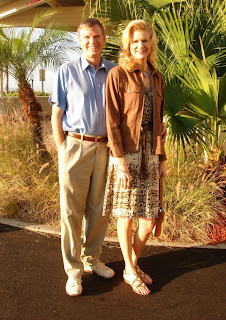 Wes and Rachelle in the sunshine

About 200 people were at the brunch. Four artists on our table gained awards. Wes was Third in the Birds and Animal category, Rachelle’s award was for the Best Traditional Portrait Miniature, and I was First in Watercolour. After the prize giving (beautifully calligraphed certificates - and cheques) we all drove to the exhibition. It was held at the Dunedin Fine Art Center and this year there were about 800 exhibits on display. The MASF stages the largest miniature exhibition in the world and sales were really brisk. About thirty of us met up later for dinner in a lovely little restaurant in downtown Dunedin. The crab cakes were delicious and I know Rachelle enjoyed her Key Lime Pie – a Florida speciality.