Island in the Sun

My car was covered in the salt spread on the roads to avoid slipping on the ice, so on Saturday afternoon, after a pleasant little lunch with Jilly at Phyllis Court, I took it for a quick valet job, then packed a couple of bags and headed for Gatwick. I’d decided to spend the night there rather than risk an early morning drive on Sunday. I’d booked a guesthouse 5 minutes away from the airport. It was a bit crummy but adequate. Next morning I checked in at the airport and after the interminable security checks – which included a special x-ray for shoes - I finally emerged into the departure lounge where I spied Paul Daniels chatting up a beaming black girl sporting tall and waving feathers from her hair and shoulders. She was selling Southern Comfort (or was it Jack Daniels?) Everyone knows Paul, so he was able to get me in to the Virgin Upper Class Lounge where Debbie was poring over a Suduko puzzle. We were all heading for the sunshine of Barbados.

My companion on the flight was a charming Scottish widow. Older than me, her husband had recently died, but undaunted she was travelling the globe. I was impressed to discover she was conversant with the internet, and in fact had looked up ‘Hiking’ and Scottish Country Dancing’ in Barbados. Sure enough she found both and has brought her hiking boots and is enrolled for a Scottish Dancing evening on Tuesday. Paul and Debbie came back to have a chat with us. Paul gave my companion a very ingenious bookmark and performed the disappearing coin trick. 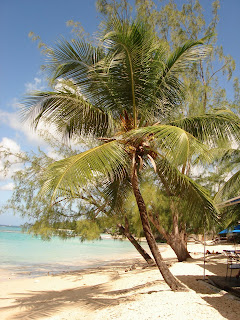 Now I’m in Barbados. How marvellous to be in tropical sunshine. I thrive in the heat. I was met at the airport and whisked off through fields of sugar cane waving in the wind to my hosts house. On Monday morning we walked along the beach to the Lone Star where I sipped the ice cold Pina Colada I’d been anticipating for a while. 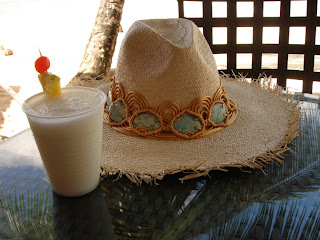 In the afternoon I took a trip down to Holetown. This little village was first established by the British colonists way back in the 17th century. The tiny chattel houses there have now become picturesque pastel-coloured boutiques. 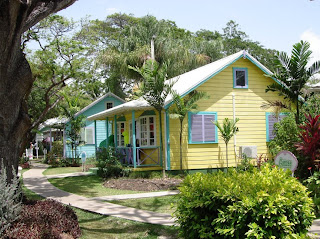 A Chattel House in Holetown
I’m staying in a lovely little cottage adjacent to the pool at my hosts house where I spent an hour savouring the hot sunshine and acquiring the beginnings of a tan.
In the evening we drove to the Lone Star one of the best restaurants in Barbados) where Paul and Debbie suddenly appeared - they were joining us for dinner. What a delightful surprise. We had a great time listening to the crashing of the waves just below us, looking at the stars, enjoying a lovely meal, and consuming a few bottles of Rose wine.
Now it is Tuesday, and it already seems as if I’ve been here for a week. I was driven across the island this morning. The views were breathtaking and the winding roads exhilarating, if a bit scary at times. We visited 350-year-old St. Nicholas Abbey – a Jacobean mansion built in 1658 -one of only three Jacobean Plantation Great Houses existing in the Western Hemisphere. After a walk around the house and gardens we drove to one of the highest points in Barbados where we gazed out to a rough sea in the distance. 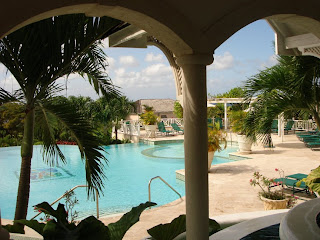 Sugar Hill Clubhouse
I'll attempt to insert a littlle video clip taken as we watched the waves gently rolling in to the shore yesterday with the occasional water-skier and sailing boat gliding by out to sea. Talk about idyllic – especially after the penetrating cold I’d left behind in England.

I’ll end this blog on a sad note. Yesterday I had an email from Anne, William Stone’s daughter, telling me that her father, my wonderful 108-year-old friend, had just died. Having seen William only a few days before Christmas, I’ll treasure the little piece of video I made of him singing a sea shanty, which will always remind me of this marvellous old sailor.