You’d expect Florida to be warm, if not hot and sunny – after all it’s called ‘The Sunshine State’. However it wasn’t to be. Florida had its coldest January for many years. Ice warnings were prevalent and Mike Petryszak brought all his orchids indoors and covered his other plants in the garden to avoid the nightly frosts.
I always enjoy going to the Miniature Art Society of Florida’s Annual Show. This time there were over 1,200 entries. It was great to meet up with so many old friends – Wes and Rachelle, Mike and Kay, Susan and Russ, Herb, and Carol, to name but a few. And Mona – who I see has left a comment on my last blog. (Nice pictures, Mona – I’d like a copy of both of them if possible). 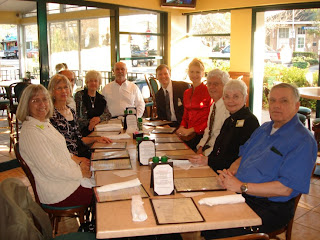 A happy dinner party with some of the artists

Wes and Rachelle have just published their book ‘Exquisite Miniatures’. They brought a few dozen with them. I’ve just finished reading my copy – it’s not only a beautiful publication with many full-colour illustrations of their work, but is extremely informative. 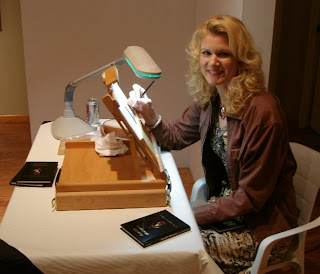 Rachelle demonstrating her exquisite work at the show

Being in the USA during the inauguration of the 44th President Barack Obama on Tuesday 20th was fortuitous. While waiting for my friends to arrive from across the state in the afternoon, I was able to follow the entire proceedings live on television from my hotel room. And very impressive it was too. What a gracious and elegantly organised transit from one President to the next. (In total contrast to the way our departing Prime Ministers are hustled out of Downing Street!) President Obama seems to be rapidly making a number of good moves – one of which is to appoint Senator George Mitchell his ambassador to the Middle East. He was the man who was instrumental in achieving the IRA ceasefire and peace deal. (Incidentally my miniature portrait of him is currently on exhibition at the MASF show, as I met him a couple of years ago in Barbados.)

Later in the afternoon my old friends Bill and Marge Organ drove all the way over from Port St.Lucie on the east coast of Florida to meet up. They stayed the night at my hotel - the Yacht Harbor Inn and we had dinner together at a nearby, supposedly good, fish restaurant. Bill and Marge visit Henley from time to time and have made many friends this side of the pond. They drove me over to the Art Exhibition the following morning on their way home. Bill and Bill outside the Dunedin Fine Art Center

One of my dearest Florida friends, Mary Kuggleman, is sadly very ill. She lives at St. Petersburg Beach – twenty or so miles south of Clearwater. Kay drove me down to see her on Wednesday afternoon. Mary is suffering from cancer, and I fear this will be the last time I will see her. What a feisty spirit she possesses! Although her weight has gone down to about 85 pounds, she radiates goodness with a brain as sharp as a razor.

After my experience on American Airlines last week it was such a pleasure to board the British Airways flight home on Thursday evening. Mind you, the USA hadn’t entirely finished with me because, as I walked up to the baggage screening area, a big black hand was raised and the man behind it said “Whoa there Sir!” Had my complaints about AA reached his ears? No, I was singled out (yet again) for special treatment. Have a look at the red SSSS’s on my ticket:

They were stamped there for a purpose. I know there are random searches everywhere these days, but why do I always qualify in the USA? I must look suspicious. Anyway I was marched off to a separate room and all the contents of my pockets and bags were not only thoroughly searched, but a wet-wipe sort of pad was passed over everything (me included!) I’ve no idea what they expected to find, and as I don’t smoke, do drugs, and only really swear when I’m driving, eventually they found no reason to detain me further.

The eight-hour flight across the Atlantic was very smooth, and how pleasant it was to hear a friendly stewardess make the announcements, unhurried and with clarity, compared to the nasal automaton on AA last weekend. The meal was nice too - and piping hot.

Pat and Averil were waiting at Gatwick airport (now that’s a treat I don’t often experience) and drove me home in the pouring rain and spray along the M25 motorway, only making one small deviation when we found ourselves going the wrong way. Tracey had left a few groceries by my front door, so after unpacking, catching up on the news in the newspapers, (including the Daily Mail’s coverage of Paul and Debbie’s holiday in Barbados), answering all the waiting mail, emails and writing cheques, I managed a quiet evening watching last week's 'Eastenders' on TV. My recipe to avoid jet lag is to always keep to the time of the country I am in, so it was bed at midnight and up at 7.30 this morning bright and early. Now I’m ready for the Chinese Year of the Ox. Last year was pretty good, being the year of the Rat. I’m a Rat.