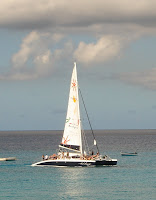 The day started with a power cut, Apparently a lorry had collided with a telegraph pole so I missed my nice cup of tea and croissants for breakfast. But no matter. I’ve been firing on all four cylinders ever since I arrived here. Yesterday was no exception - we’d been invited for the day out on a large catamaran . Big enough for 60, we were a party of about thirty. Most people knew each other, and some were from Henley. There’s quite a Henley contingent living on the island.
We left at about 10 am and were soon out to sea. Once we were under sail we just seemed to race along with the warm wind whistling past. So exhilarating! The crew were fantastic and plied us with every sort of drink you could wish for, with smiles a mile wide. I kept to rum punches and pineapple juice, as I knew we’d be going out later in the evening. Lunch on board was great - all sorts of local fish – including flying fish and swordfish, as well as tasty curries and coconut rice. Some people donned snorkels, masks and flippers (all provided) to see the turtles and sunken wrecks, some just swam, and the rest of us just enjoyed the glorious sunshine - and the girls danced. We got back to the beach about five in the afternoon and waded through the surging surf to the shore.

And home in time to have a quick shower and get ready for dinner at ‘Daphne’s’ -another lovely restaurant. In fact it was the second evening we’d been there as we were with Debbie and Paul the previous night.
The Sandy Lane Hotel in Barbados is probably the most exclusive hotel in the world. I believe there are over 600 people looking after about 250 guests at any one time. On Tuesday evening friends of my hosts invited us to dinner there. What a sumptuous spread it was too. Hundreds and hundreds of delicious dishes to choose from. Never have I seen such an incredible selection. I love seafood, so sampled the giant prawns, lobsters, coconut rice, and honey glazed sweet potato. Sandy Lane is the place for celebrity spotting if you are so inclined. It seems everyone who’s anyone goes there.

A calypso group sang to us at the table – I chose ‘Island in the Sun’ which always reminds me of my time living in the tropics. Our table was right next to the immaculate glistening white sandy beach and the sound of the waves rolling in just added to the perfect ambiance. 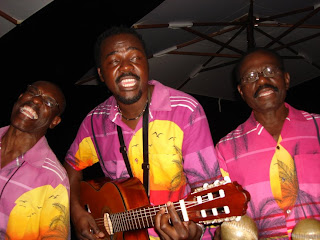 The singers at our table
Later we watched a really colourful cabaret with calypso dancers and stilt walkers dressed in gold and silver, and on the black sea in the distant horizon the lights of a big cruise ship slowly passed by. Again a lone star shone brightly above. Where were all the others? 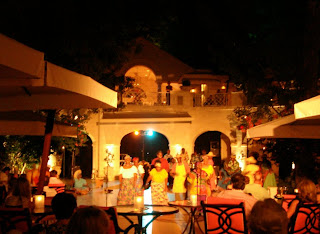 Barbados is entirely made of coral formed many millions of years ago when the seismic plates pushed upwards. Within this land are caves. On Wednesday morning we went down the largest and most beautiful. It’s called Harrison’s Cave. Deep underground the stalactites and stalagmites were beautifully and discreetly illuminated. Apart from the occasional drip, drip of water I was surprised that the atmosphere wasn’t colder. 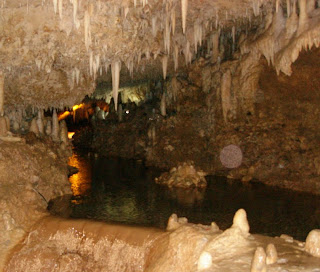 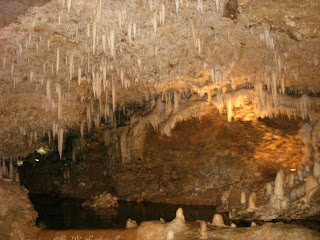 As tomorrow I have to get up at 5am to get to the airport I think I’ll do a Cinderella act and Have an early night. Paul Daniels often kids me about worrying about such things, as he and Debbie are completely used to early morning travel. He did again today, as I joined them for lunch together with my old friends Fee and Stan Stride - they’re Henley people too) 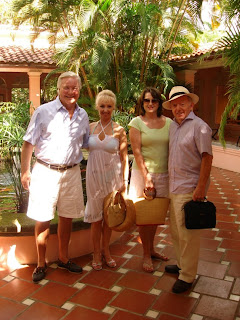