Stick to the Day Job

I’m not really a DIY person – quite the opposite in fact – but yesterday Tracey and I stripped two walls in my flat of paintings in readiness for the arrival of one of those big television sets, due next week. We re-hung twenty-five pictures to tastefully surround the monster, filled a few holes with Polyfilla, banged lots of nails into the wall, all in readiness for the painting session planned for next Monday. I also filled six strong garden refuse sacks with books – all hardbacks – to take to Oxfam or Sue Ryder. (Every couple of years or so I have a cull of books to make way for all the new ones that seem to accumulate.) I decided after banging my fingers a few times, and breaking the glass on one of the paintings, that I’d better stick to painting pictures in the future, rather than hanging them on walls.

I had a telephone call on Wednesday informing me that I’d won a prize. “Oh yes,” I said, “How much do you want me to send you?” (I get fed up with these bogus calls.) However this one proved genuine. It seemed I’d won a holiday for two in a first class hotel in Mauritius. Unfortunately it doesn’t include the flights. Apparently my friend Felicity, who is a Cabin Service Director for British Airways, had bought me a ticket in the Air Cabin Crew annual draw without telling me, and it had come up trumps. The expiry date is November 20th next year, so all I need is the airfare and a nice companion to come with me. Any offers?

Every Christmas day, Peter Sutherland – the founder of the Upper Thames Rowing Club - dresses up as an historical or topical figure, and I photograph the result. I’ve done so many that this year I decided to make him a surprise calendar the other day as a little present. Here are three of the images.

What do you say when a good friend tells you that he only has days to live and would like to say goodbye? This happened on Wednesday. Steve Jennings, an old friend from my advertising days in Asia – we’ve shared many adventures together – told me that his heart was rapidly giving out. Steve is an amazingly young-looking man of eighty-four and his positive outlook to his imminent demise was inspiring. “I’ve had a wonderful life, Bill,” he said. “Travelled the world, been married to two lovely women, and now looking forward to the next great adventure.” We chatted for a while before we said goodbye for the final time. What a nice man. Steve was responsible for a number of enduring designs – including the logo for the famous JAEGER brand.
Marsh Lock was full of canoeists again the other day. I should say kayaks, I suppose. When the water comes rushing out between the gates of the weir it’s an ideal haven for the youngsters who shoot them. I did this myself when a young man, but my kayak was a lot more bulky, as I made it myself, and not completely waterproof when it rolled over. But still enormous fun 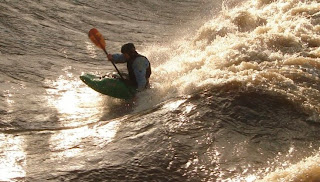 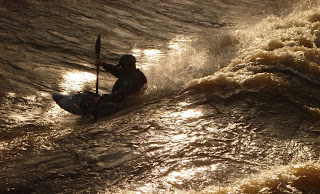 Shooting the 'rapids' at Marsh Lock

Y.P.Chan, the man I appointed as the MD of our Singapore office when I left Asia in the 70’s, bought a copy of my autobiography last month. Yesterday I received a letter from him telling me how he and his wife, Diana, had been reading it while travelling through China on their way to Guan Dong to visit their ancestors last month. His comment about the early chapters really amused me, as he said they reminded him of a Charles Dickens novel. I suppose, as we had no electricity or indoor plumbing, and having to drag the tin bath indoors from off the outside wall for our regular Friday baths, would have seemed alien to a Singaporean. I wonder whether he also imagined that I climbed chimneys to earn a few pennies pocket money!

Felicity and I went to the Regal in Henley last Saturday to see ‘The Changeling’. What a superb film. Starring Angelina Jolie, directed by Clint Eastwood, and set in 1920’s Los Angeles, I strongly recommend it. Her acting deserves an Oscar as she attempts to find her young son who’d disappeared, and takes on the corrupt and malicious LAPD as well as being thrown into a horrific lunatic asylum. The atmosphere is electric throughout the film.

My friends think I’m a bit sad, as I’m currently hooked on ‘I’m a Celebrity – Get Me Out Of Here!’ Although I missed the first couple of episodes, when I heard that Timmy Mallet had entered the jungle I started to watch the programme. Mind you, he would have irritated a saint with his insane laugh and weird hooting. I think I would have hit him! (Alwen and Buzz know him well, and we all agreed he came across as a completely different person to the Timmy we know.) It’s even money on who will be the King or Queen of the jungle tonight, but I predict it’ll be Joey. Watch out to see how I lose my money!