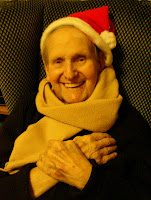 I took Val over to the Lord Harris Court at Sindlesham to see my very old friend William Stone on Sunday afternoon. It’s amazing to think that William was born in 1900 – and is still going strong. I took my video camera with me, and as William loves singing (and can remember the words to dozens of songs, some with ‘alternative ‘ endings which he recites with a wicked grin on his face) I made a little seasonal video. At one stage he got carried away and ended his song with the words “and Happy Christmas to you, Uncle Bill.” Uncle! I’m nearly 40 years younger than William!
A family in nearby Sonning have for several years decorated their house at Christmas time to such a degree that it was frequently voted the most elaborately decorated house in England. Each year more and more lights were added. However it became a bit too much for the neighbours as so many people came to view it after dark. So they complained to the police. Even though a large amount was donated by the public (and given to charity each year), the owner of the house was convicted of a nuisance and was served with an ASBO (Anti Social Behaviour Order). It will last for 3 years. I went over there last night and found it much modified - but still very colourful. This is how it looked before the ASBO. 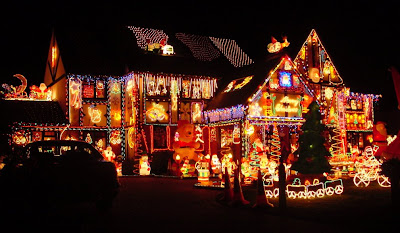 I’m not a party animal by any means, but at Christmas it’s a bit unavoidable, isn’t it?
Last Saturday Herchel and Terry Jordan held their annual party at Wooburn Green. They mostly live in Portugal and Cape Town, and as they only arrived back in England 3 days before the party, how Herchel managed to put on such a splendid and lavish spread, I’ll never know. (She even made me a special Shepherd’s Pie without cheese, knowing my allergy to cheese - or fad, as some people believe.) Most of the guests were friends I’ve known for many years. Jimmy Tarbuck was there as usual, cracking jokes one after another – a big pink ball of fun.
On Monday evening, after spending a delightful couple of hours with youngsters Natalie and Bart in Henley, who gave me a plate of fudge and coconut-ice they’d made themselves, I went on to Jurek and Vicky Piasecki’s ‘Polish’ party at Shiplake. This is the most lavish party I ever go to at Christmas. A large marquee had been attached to one side of the house, the interior decorated to resemble a comfortable Arabic tent with lounging seats and scores of cushions scattered all over the place. Canapés were served most creatively – some resembling small piles of chequered parcels, some in little pastry-shaped boats, and others in glass spirals. And there must have been at least fifty different types of Vodka in highly coloured and decorated bottles on one of the tables.
Have you ever wondered what George and Martha Washington sat down to at Mount Vernon on Christmas day those many years ago? No, I’m sure you haven’t, but have a look at the menu:
An Onion Soup call’d the King’s Soup
Oysters on the Half Shell Grilled Salt Roe Herring
Boiled Rockfish
Roast Beef and Yorkshire Pudding Mutton Chops
Roast Suckling Pig Roast Turkey with Chestnut Stuffing
Round of Cold Boiled Beef with Horse-radish Sauce
Cold Baked Virginia Ham
Lima Beans Baked Acorn Squash
Baked Celery with Silvered Almonds
Hominy Pudding Candied Sweet Potatoes
Cantaloupe Pickle Spiced Peaches in Brandy
Spiced Cranberries
Mincemeat Pie Apple Pie Cherry Pie Chess Tarts
Blancmange Plums in Wine Jelly Snowballs
Indian Pudding
Great Cake Ice Cream Plum Pudding
Fruits Nuts Raisins
Port Madeira
Makes you wonder, doesn’t it? And we complain today about our overweight children.
As it’s now Christmas Eve I’d like to wish all my blog followers and friends a very Happy Christmas and leave you with a picture of my, not particularly elegant, Christmas Tree nestling in the corner of my living room. 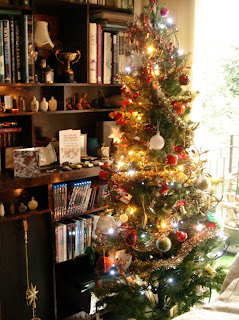